25 brilliant, badass, genius actors and musicians who are diversifying the Oscars. 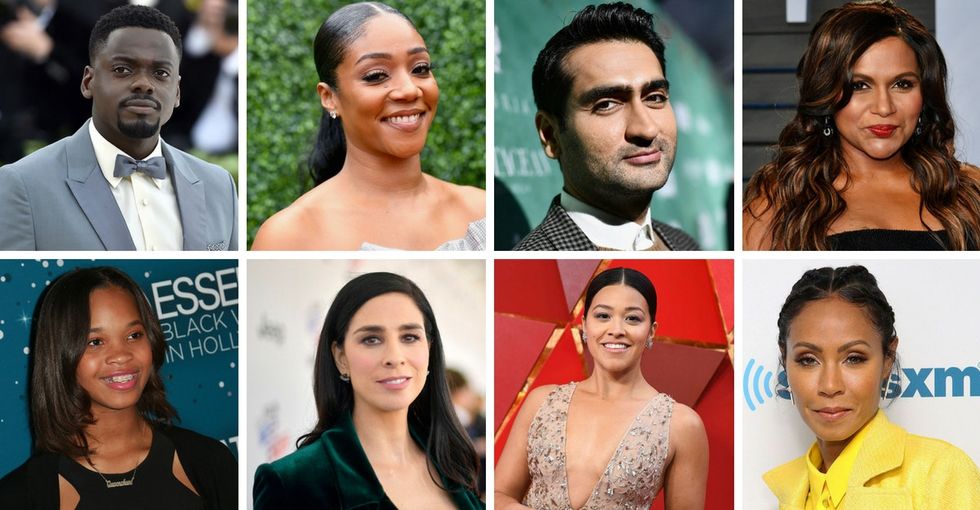 In 2018, The Academy of Motion Picture Arts and Sciences got much larger — and more diverse.

The Oscar-granting organization sent out 928 invitations (a jump from the previous year's 774) to actors, screenwriters, and executives that have shown dedication and exceptional work in the film industry. Those invitations set out make the organization more female, more ethnically diverse, and more international.

928 is a huge number, but we've listed some familiar faces that are joining the esteemed body below:

An outspoken defender of women's rights, immigration reform, and the importance of diversity in film, Rodriguez publicly accepted the award with glee.

As one of the first actresses to call out the Oscars' diversity problem, Pinkett Smith's decadeslong work is finally getting some well-deserved recognition.

Photo by Emma McIntyre/Getty Images for Women in Film.

Nanjiani's public recollection of falling in love with the woman who would become his wife during her life-threatening sickness warmed the hearts of romantics around the world. A vibrant defender of equal rights and the importance of diversity in film, Nanjiani is sure to add some necessary perspective to the Academy.

At just 14 years old, Wallis is the youngest member of this year's Academy cohort.

Pierce may be one of the hardest working men in Hollywood and on the ground. As a hilarious and thoughtful advocate of community engagement and diversity in film, he's a welcome addition.

"Moonlight" warmed the hearts of many Americans, in large part thanks to Rhodes' brilliant depiction of black gay manhood.

It's clear that there are few things that Diggs can't do. Now, he can add being on the Academy to that list.

Lamar also won a Pulitzer in 2018 for his rap genius. Enough said.

Humanitarian. Writer. Bringer of joy to millions of children and adults for decades. Rowling is the epitome of using one's talents in spite of setbacks to make the world a better place. Her voice in the Academy will make waves.

Schumer isn't one to back down from a challenge. She's a hard worker, a fighter, and an important voice in feminist film.

Hall's recognition is long overdue, but it's awesome that it's finally here.

A breakout star of 2017, Kaluuya's rise in film has been fast, powerful, and extremely important.

Maestro's genius were evident in "Frida" and many other films. This acknowledgement is extremely well deserved.

This year, the Academy is more Asian, Latino, black, female, and queer, representing the wide array of experiences around the world. Our film industry will be better for it, and so will the audiences that tune in.