24 stunning photos of cities around the world turning their lights off to make a point. 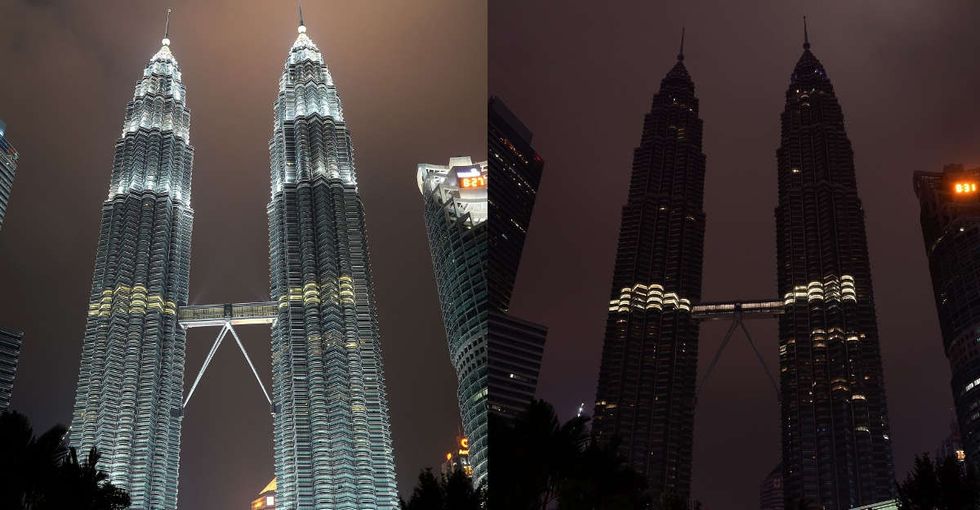 On March 19, dozens of countries around the world observed the 10th annual "Earth Hour."

Famous landmarks around the world — and millions of private citizens — turned off their lights for 60 minutes at night to create stunning, rarely seen images of their cities.

1. Here's the Parthenon in Athens, Greece, with its lights on...

The Parthenon, lights on. Photo by Panagiotis Tzamaros/Getty Images.

The Parthenon, lights off. Photo by Panagiotis Tzamaros/Getty Images.

3. The Petronas Towers in Kuala Lumpur, Malaysia, look plenty majestic all lit up.

4. And young-adult-novel-dystopia eerie in the dark.

5. The lights on Big Ben and Britain's Houses of Parliament were also switched off for Earth Hour.

6. Which made the complex look not unlike it had been overrun by dark wizards.

8. ...in order to bring attention to the threat of global climate change...

9. ...and convince the world to heed the warnings about imminent global catastrophe from scientists, activists, and religious groups — notably the Vatican.

10. Pope Francis has said, of climate change, "Any harm done to the environment ... is harm done to humanity.”

11. In the nine years since the first Earth Hour, the event has expanded to include iconic landmarks around the world, like this — the famous "Chain Bridge" in Budapest, Hungary.

12. Though it's been frustratingly slow at times, some actual, real-life headway on climate change has been made since then.

13. Especially in Paris, where a historic climate pact was signed in December.

14. 195 countries reached the landmark agreement together...

15. ...including top polluters the United States and China. Shanghai (pictured below) was a 2016 Earth Hour participant.

16. The agreement commits the nations that signed to take immediate action in order to limit total global temperature rise to 2 degrees Celsius.

17. Critics of Earth Hour have knocked the annual event for being more symbol than substance. After all, what does it matter if the Wat Arun in Bangkok, (below) turns off its lights for a few minutes?

18. After the lights go back on, polluters will still pollute, politicians will still stall and delay, and nothing will change. At least not right away.

19. But when young people gathered around the Trevi Fountain in Rome...

21. ...and business people in downtown Jakarta, Indonesia, see the lights go out and...

22. ...we're all thinking about are how our actions and the fate of the planet we all have no choice but to keep living on are connected...

23. ...it's enough to give you hope that the world is maybe, finally, getting it. Yes, it is only a small symbolic gesture. But seeing the National Stadium in Beijing (below) go dark for an hour isn't nothing.