22 dads and their daughters get real about feminism in this incredible video. 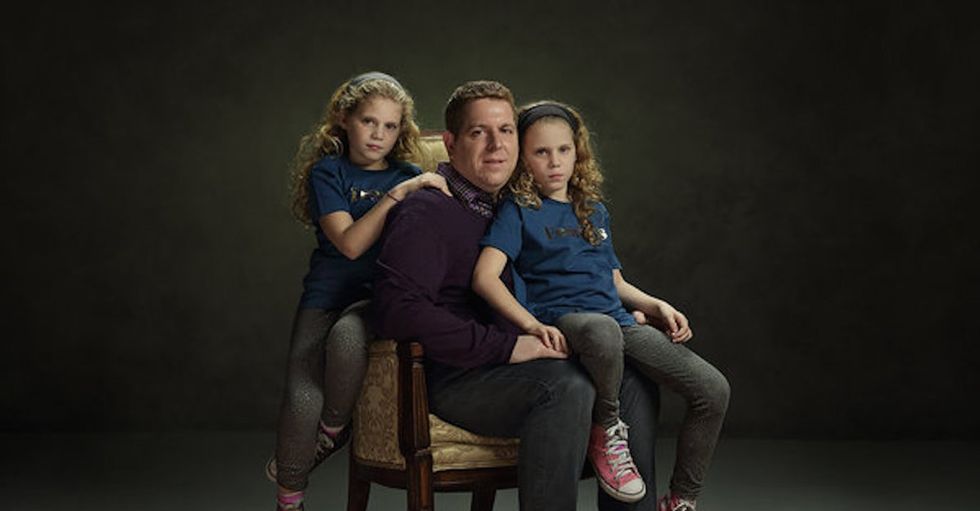 So begins many a bad take these days by men outraged over news stories about sexual assault, harassment, or inequality.

While it's good to be outraged by those things, "As the father of a daughter" holds some troubling implications: first, that it's somehow difficult for them to see women as people deserving of fair treatment without having raised one. And second, that just having a daughter is apparently enough to make them an expert on women's issues.

Photographers Marzia Messina and Sham Hinchey wanted to challenge dads to really sit down and think about what feminism means and why it matters.

Inspired by talks with their own daughter, Penelope, they launched a project called "Dear Daughters" in which they recruited 22 men and their daughters, ages 8 to 11, to sit down and have frank conversations about equality.

All photos by "Dear Daughters," used with permission.

Using a simple board game designed by Messina and Penelope, the dads and daughters took turns drawing question cards that prompted discussions.

The cards asked things like "How do you see yourself and what will you be doing when you're 25?" and "What lessons have you learned by bringing a daughter into the world?"

"The first questions were very soft, but as the game progressed they became more challenging and the couples really had to work hard and help each other," Messina says in an email.

The girls started with light musings about their future: "I'm going to be a social media influencer (when I'm 25)" one girl told her dad. Another said she "wouldn't necessarily be 'drinking drugs' or anything." Another told her dad she wanted to be a lawyer when she grew up.

From there, the daughters were asked to name a woman they admired: Michelle Obama, Jessie Graff (the first female Ninja Warrior champion), Venus and Serena Williams, and Hillary Clinton were all popular answers.

Soon the tables turned on the dads, who were asked to come up with a slogan for a hypothetical women's rights march.

With help from their daughters, they came up with some pretty solid taglines.

"We want equal rights and we want them now," one dad suggested. "She persisted," added another, referencing his admiration for Elizabeth Warren. "Go forward, be brave. That would be mine," said another.

(OK, so the actual slogans could use some workshopping.)

Watching the wheels turn in the dads' heads as they attempted to distill and encapsulate the essence of feminism in only a few words, is fascinating. You can tell it's something they thought they understood but had never been forced to articulate before.

Then: "What lessons have you learned by bringing a daughter into the world?"

A few of the men pondered how being a parent in general changes you. But others seemed heavily affected by the exercise of taking the time to see the world through their daughters' eyes — waking them up to problems that all women experience, not just their daughters.

"I never thought about the hate speech," said one of the dads. "There are a whole lot of words for women, but there aren't a lot of words to describe the same behavior in men."

"(I learned) just how few women there are in similar positions as there are men," said another, observing that there has never been a female president or a woman on the moon.

"It makes you wonder, can you change the world?" one of the fathers said. "And can you strengthen and prepare your daughter to be strong enough for the challenges in that world?"

At the end of the game, each pair posed for a portrait, with the hopes that these conversations would strengthen their relationships and help them communicate more openly about all kinds of important issues in the future.

These discussions are a reminder that being a dad doesn't mean men suddenly inherently understand the importance of feminism — and that their support for gender equality has to extend beyond their own offspring.

That understanding and support comes only from effort, thought, and open conversation.

The same goes for all men. Having a wife, girlfriend, mother, or female friend doesn't give you a pass; it doesn't mean you don't have to put in the work to understand the world through a woman's eyes. Nor should you only begin caring about gender equality once you have women in your life who you care about. Women are people, whether you personally know them or not.

The power of "Dear Daughters" doesn't come from the fact that these men are fathers. It comes from the fact that many of them are examining inequality in the world for perhaps the first time — and hopefully not for the last time.

"We have had so many comments and encouragement from men and women who have asked about the project and the game to play at home," Hinchey says. (They hope to make it available soon.)

"It has inspired women to get their husbands involved in conversations which they inherently thought were reserved only for the females of the house."

Messina and Hinchey reiterated that being a father to daughters does not make a man a feminist, but that conversations like the one sparked in "Dear Daughters" can go a long way toward that goal.

Even more importantly, perhaps, they hope men will start having similar conversations about feminism with their sons, and/or with other men, unprompted by anything but a genuine desire to make the world a better place.

Watch the full video of the project below: