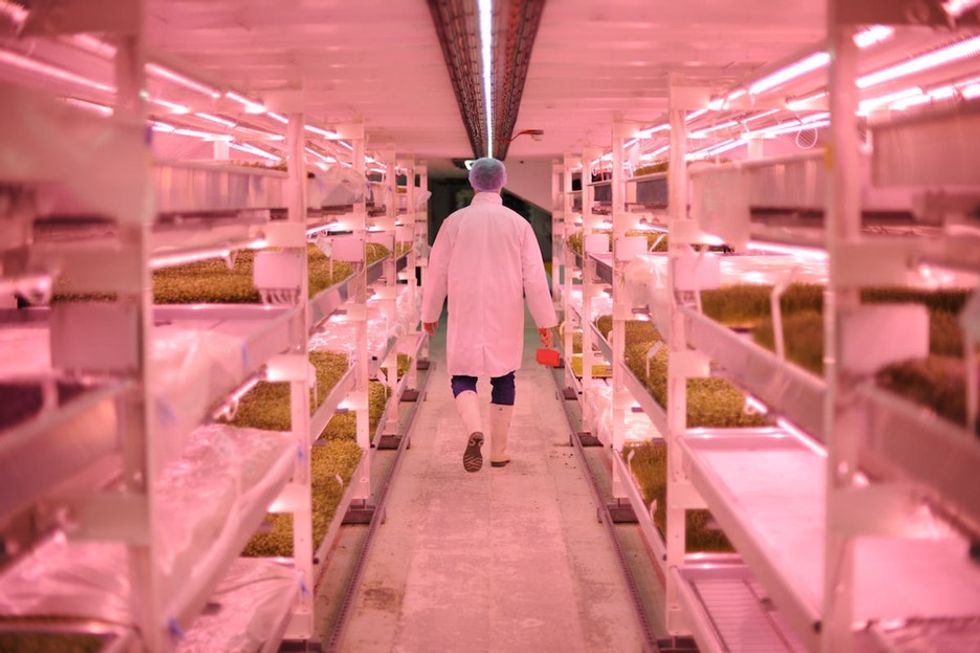 Can you imagine trying to feed 9 billion people?

I mean, it's hard enough to feed ourselves some days.

But come 2050, Earth will be responsible for feeding an additional 2 billion people roaming the planet. The question is: how to do that?

The answer isn't all horizontal. We can't keep clearing space and sending food halfway across the world. In fact, we need to look up. As in, like, literally grow food upward.

Vertical farms could be a big part of the solution to our food conundrum. And they are the coolest looking farms we've ever seen.

These bad boys look like something straight of the year 3000, only they're happening right now.

With traditional farming methods depleting the planet's resources, now is the time to look to alternatives that can help reduce that burden. To date, we've cleared space the size of South America for growing crops. And to make matters worse, 33% of the world's land surface is already degraded and can't be used.

Another problem is transporting food from point A to point B. For example, back in 2005, importing produce by plane into California alone released more than 70,000 tons of carbon dioxide — the same as over 12,000 cars on the road. Granted, this is a small sample size, but with an estimated 70% of the world's population expected to be living in cities by 2050, how are we going to ship food to them without destroying our air and water?

Vertical farms can grow produce with fewer natural resources and less waste. They can also optimize growing conditions so that the plants get the perfect amount of nutrients and light. (Hence the really cool lighting.) Plus, they're all across the world now, reducing the whole point A to point B problem.

They still have some pretty significant kinks to work out, though. For one thing, building and maintaining them is very expensive, so significant investment will be needed, and costs will need to come down to make them viable around the world. They also can't grow staple crops like grains and rice. They're not going to replace traditional farming anytime soon, but they could be a key piece of our food future — and researchers are hard at work to make sure vertical farm technology is constantly being innovated and improved so that this method is in peak form when it matters the most.

So, without further ado, here are 15 of the most awesome vertical farms sprouting up around the world:

Image via AeroFarms, used with permission.

AeroFarms is believed to be the largest vertical farm in the world. Through their patented technology and controlled environment, they're able to give their crops the perfect amount of moisture and nutrients necessary to take their taste, texture, and color to a whole other level.

Square Roots co-founders Tobias Peggs and Kimbal Musk (brother of Tesla-founder Elon Musk) are paving their own green innovation using something with a distinct Brooklyn style — shipping containers. Even better, they're paying it forward and using their unique platform to inspire the next generation of real food entrepreneurs.

Image via Plantagon, used with permission.

Still under construction, Plantagon's World Food Building aims to take the concept of vertical farming to heights it has never seen before. Once completed, the building's efficiency managing waste, water, and energy will be second to none.

On top of conducting testing at their HQ in Belgium, Urban Crops also supplies their equipment to the world, so that anyone anywhere can create a vertical farm of their own.

Just because you say vertical doesn't mean you can't look downward too. In fact, Growing Underground in London is the first vertical farm to do so. It's literally 100 feet below street level inside an abandoned WWII bunker. How cool is that?

Image via Edenworks, used with permission.

On top of growing some of the freshest greens you can find in Brooklyn, Edenworks also raises fish in its indoor aquaponic farms. You can find their delicious, pesticide-free microgreens on the shelves of Whole Foods Market in Williamsburg, less than 24 hours from when it's picked.

Spread Co.'s Kameoka Plant is the largest-scale plant factory in the world to produce a single kind of lettuce. Their next step? Creating a technologically advanced automated facility.

8. PlantLab in the Netherlands

Image via PlantLab, used with permission.

The mission of PlantLab is straightforward — change the way we feed the world. To do that, they're using their revolutionary technology to not just grow produce efficiently, but also develop growing recipes based on their thorough customer and crop research. (That's right! Their ingredients have growing recipes!)

Image via CityCrop, used with permission.

Who said vertical farms had to be taller than you? This little guy from CityCrop is just one level, but it packs a big punch — it's perfect for home, allowing you to grow your own produce without ever having to go to the market. Or anywhere really.

Image via Agrilution, used with permission.

Let's hear it for another little (but powerful) vertical farm! Agrilution's plantCube provides the complete experience and ecosystem for your home in a smart plug-and-play appliance. Oh, it also comes with an app so you can grow conveniently from your phone. (Wut?!)

11. Urban Farmer in the Philippines

Mixing new technology with classic design sensibilities, Urban Farmer is distinctly Filipino, but international at the same time. And just like their fellow home models around the world, they're shortening the distance between farm to table to just a few simple steps.

When Bill Gates tweeted about the importance of the pink lights in vertical farming, he directed people to an article featuring Green Sense Farms. They're a full service one-stop shop that designs, builds, owns, and operates their vertical farms. That way, each little seedling can make its way to the supermarket with the utmost care.

Like many other vertical farms, Bright Agrotech also supplies their technology to other aspiring farmers. And they're now the proud owners of the most installed vertical farm technology in the world. They're all about helping out local farmers, and they believe their work will be the future of food. We can't wait to see how that tastes.

Image via TruLeaf, used with permission.

TruLeaf is the proud parent company of GoodLeaf Farms. TruLeaf takes care of all the technology and then supplies it to businesses and remote communities. GoodLeaf Farms, on the other hand, showcases all the leafy goodness that TruLeaf generates and supplies the largest food retailer in all of Canada.

At their state-of-the-art test site in the U.K., CoolFarm highlights their incredibly advanced farming system that they're able to supply to more aspiring vertical farmers. They have iPad command centers, customizable parts, and a monitoring camera called "The Eye!" (Their name makes so much sense now.)

Today, there are still almost 800 million people who are chronically hungry. And by 2080, that number is expected to grow by 600 million more.

With continued innovation, vertical farms have the potential to be a key component of food access across the globe. They reduce carbon emissions, preserve land, and most importantly, expand everyone's tummies nice and horizontally. Solving the world's hunger and food access problems is going to take a lot of creativity, ingenuity, and solutions — both big and small.

And horizontal and vertical.