13 stunning photos that might win the Wildlife Photographer of the Year contest. 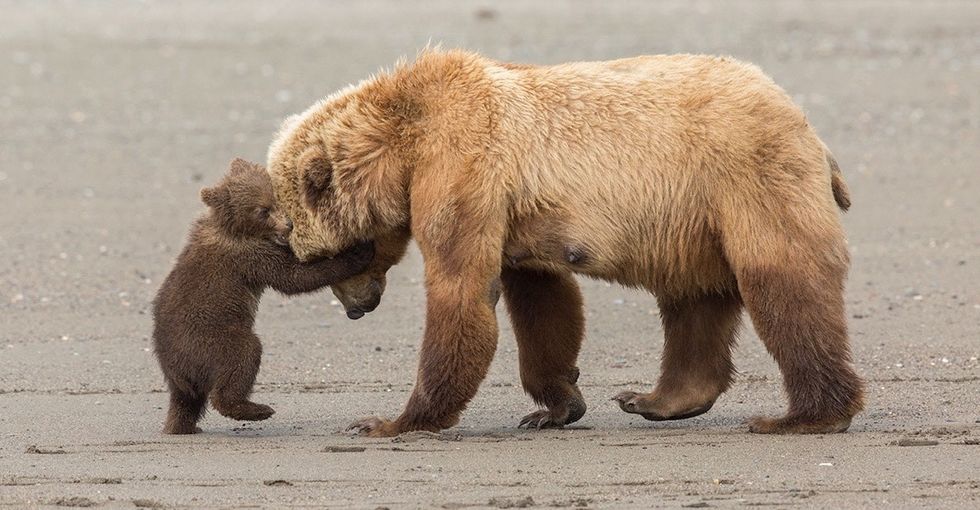 The Wildlife Photographer of the Year contest is basically "Planet Earth" meets "Survivor."

For the past 52 years, the competition has introduced us to some of the most remarkable images of the natural world. This year was no different, attracting nearly 50,000 submissions from professional and amateur photographers from around the world.

On Sept. 12, the contest managed to narrow that astounding number of entries down to a handful of finalists, releasing just some of those finalists' incredible images to the public. From the intimidating glare of a bald eagle to tender moments between a mama bear and cub, each one of these images is a truly remarkable glimpse into life on Earth.

Check out the images from 13 of the finalists below.

A female Weddell seal introduces her pup to the wonders of their underwater world. While seal pups are born on the ice, by the time they're adults, they'll outclass even the best human divers. Photo by Laurent Ballesta/Wildlife Photographer of the Year, taken off the coast of eastern Antarctica.

Caught red-handed with a stolen egg, this arctic fox isn't likely to give up its life of crime anytime soon. Arctic foxes can steal up to 40 eggs a day, burying them in the icy ground for future consumption. When the long, dark winter eventually arrives, these illicit stashes will be a lifeline for this fox and its kits. Photo by Sergey Gorshkov/Wildlife Photographer of the Year, taken on Wrangel Island, Russia.

3. "The power of the matriarch" by David Lloyd

Lloyd captured the image of this female African elephant in Kenya. Likely the matriarch of her herd, Lloyd says her gaze was full of "respect and intelligence — the essence of sentience." Photo by David Lloyd/Wildlife Photographer of the Year.

4. "Romance among the angels" by Andrey Narchuk

One day while diving in the Sea of Okhostk north of Japan, Narchuk found himself surrounded by courting sea angels (a type of marine mollusk that is related to snails). He managed to capture a handful of photographs before he had to surface. The next day, they had all disappeared. Photo by Andrey Narchuk/Wildlife Photographer of the Year.

You might think "insiders" refers to the clownfish, but if you look closely, you can see that each carries a small crustacean known as an isopod in its mouth. These strange creatures are parasites that consume and eventually replace the fish's tongue. Chilling. Photo by Qing Lin/Wildlife Photographer of the Year, taken in the Lembeh Strait in Indonesia.

Indonesia has some of the world's greatest marine biodiversity, but its waters are also plagued by plastic debris. Hofman spotted this tiny seahorse clinging to a cotton swab during a dive near Sumbawa Island. Photo by Justin Hofman/Wildlife Photographer of the Year.

Nigge lay on his belly as a rain-soaked bald eagle approached him. Glowering down at the photographer, the bird presented an intimate, and intimidating, portrait. Photo by Klaus Nigge/Wildlife Photographer of the Year, taken in Dutch Harbor, Alaska.

With an emerald tail streaming behind and ruby chest on display, a male quetzal returns to its nest with food for its two young chicks. Kastiel spent a week camped out in a small patch of the Costa Rican cloud forest to get this shot. Photo by Tyohar Kastiel/Wildlife Photographer of the Year.

Winter is a time of rest for many animals, but not this red squirrel. These animals spend the entire season scraping by on fallen spruce cones. Andersson captured this squirrel's portrait during its rare and brief moment of downtime near his home in southern Sweden. Photo by Mats Andersson/Wildlife Photographer of the Year.

The Sonoran Desert can be a harsh, unrelenting environment for any living thing to grow in, but saguaro cacti find a way. With roots reaching deep underground for water, these incredible plants can live up to 200 years, their branches morphing and twisting into patterns as they age. Photo by Jack Dykinga/Wildlife Photographer of the Year.

With plentiful grasses, salmon, and clams, Alaska's Lake Clark National Park is a perfect summer home for brown bear families. "I fell in love with brown bears," Scully said. "This young cub seemed to think it was big enough to wrestle mum to the sand. As always, she played along, firm, but patient." Photo by Ashleigh Scully/Wildlife Photographer of the Year.

12. "Glimpse of a lynx" by Laura Albiac Vilas

Iberian lynx are some of Spain's most elusive wild animals. So when one appeared in the Sierra de Andújar National Park, Vilas couldn't help but snap a picture. "The animal's attitude surprised me. They weren't scared of people — they simply ignored us," Vilas said. "I felt so emotional to be so close to them." Photo by Laura Albiac Vilas/Wildlife Photographer of the Year.

13. "Saved but caged" by Steve Winter

A 6-month-old Sumatran tiger cub snarls at the camera, revealing its wild, ferocious heart. But this cub won't be returning to the wild. It was found and rescued from an illegal snare, and its back leg had been so damaged that it had to be amputated. This cub likely will spend the rest of its life in a Javan zoo. Photo by Steve Winter/Wildlife Photographer of the Year.

Through these incredible photographs, the contest showcases the diverse, wild, beautiful, and ultimately fragile world we live in.