10 weirdly named natural places in America and the stories behind them. 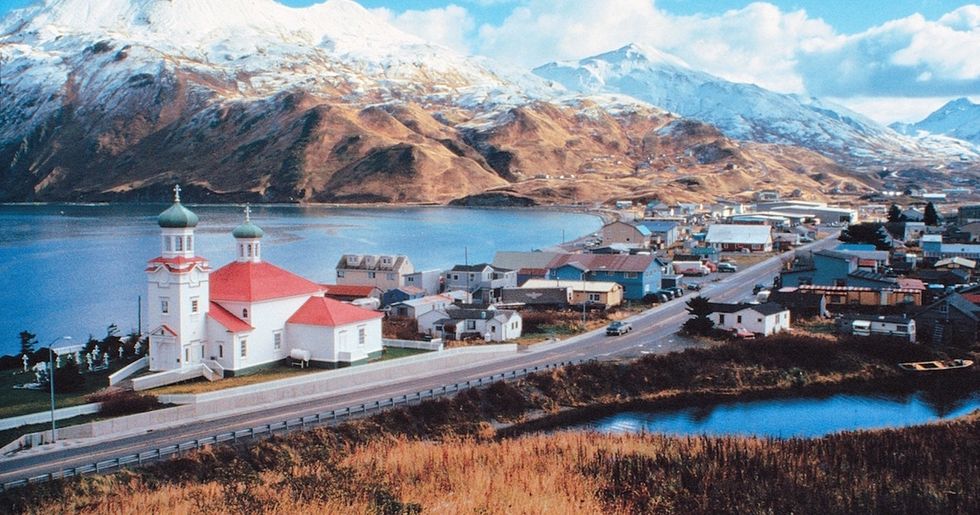 The Grand Canyon. The Rocky Mountains. The Great Lakes. Many of the names of our American natural wonders are ... a little on the nose.

To be fair, back in the day when people were exploring 3.8 million square miles of largely uncharted territory, literally circling the wagons to brainstorm the name of a random mountain or lake probably got old fast. “Well, they’re pretty rocky, ain’t they? Rocky Mountains — boom. Done.”

But in this vast, amazingly diverse land we call the United States, there are still lots of pretty damn strange names of natural features that might make you say, “Hm, maybe I should go to that pretty place with the funny name.”

As an avid hiker and fan of our national parks, here are a few of my favorite of those pretty places with funny names — and some that are still on my list of places to go.

Bumpus Hell: when the neighbor's hounds eat all your turkey.

GIF via "A Christmas Story."

Bumpass Hell, on the other hand, is something very different.

It gets its moniker from Kendall Vanhook Bumpass, an ill-fated late-1800s settler who fell into one of its boiling mud pits, severely burning his leg, which is one way to enshrine your name in history, I guess.

Today, you can avoid Bumpass’ fate by exploring the stinky-but-surreal area from the safety of sturdy, carefully placed boardwalks.

Whoever decided to put a sign for this park on the freeway clearly didn't have the best interests of teenage boys in mind. We may never know how many ounces of Mountain Dew were lost to the limitless guffaws this name has caused over the years.

Putting aside the adolescent yuks, Big Bone Lick is still just a weird name. Contrary to how it sounds, this place was not named for licking any kind of bones. It’s the site of an ancient salt lick — mineral deposits where mammoths, mastodons, and other large animals fed and died, leaving their big bones for William Lewis (of Lewis and Clark fame) to dig up.

Is this an oxymoron? Actually, no. Despite its name, this island is, in fact, in Alaska — in the 1,200-mile-long Aleutian archipelago, to be exact.

Unalaska doesn't mean un-Alaska — it's more along the lines of “near Alaska.” The word “Alaska” goes back to Russian colonial times, when it referred to the mainland of, yep, you guessed it: Alaska. “Unalaska” is thought to be a combination of Russian and the Aleut indigenous language meaning “near the mainland.” And while Unalaska may be hundreds of miles off the coast of mainland Alaska, that’s just a little jaunt in Alaska terms.

Early French trappers thought so too. So much so that these wondrous peaks reminded them of other beautiful things from back home when they first laid eyes on them. Legend has it that these early Francophoners named the peaks Les Trois Tetons — The Three Teats (or The Three Breasts).

Devil's advocate: These dudes were probably super homesick and lonely, like ancient mariners who imagined mermaids on long voyages.

Or, they were just French.

Finally, a national park covered in neatly manicured Bermuda grass! ... OK, not quite.

The strange name derives from an 18th-century German homesteading family — the Dahles — and a local term for an open mountaintop meadow — a "sods." The wilderness area is also full of sphagnum (peat moss) bogs due to its unique terrain and ecosystem.

It's gorgeous to look at — just watch where you step.

This 15,325-foot peak that sits on the border between Alaska and British Columbia has “the unofficial distinction of the worst-named mountain on earth” — as it actually has terrible weather.

Its moniker wasn’t given ironically, though: Legendary explorer Capt. James Cook supposedly named Mount Fairweather from the comfort of his ship offshore in 1778 during a rare period of clear skies.

The rare badass who's climbed it would likely say otherwise.

They say fortune favors the bold. "They" are wrong, at least sometimes. Fortune certainly didn't favor the bold but ill-fated Donner Party in 1846.

California-bound, the Donner Party group of settlers gambled on a newly discovered shortcut through the Sierra Nevada, past what was then called Truckee Lake. They hit a wall of early snow at the pass and ended up stranded for months in the freezing cold. They soon ran out of food and, faced with starvation, eventually resorted to cannibalism. Rescuers finally reached the camp in late February, leading about half of the original 87 members of the party to safety.

Today, busy Interstate 80 traverses the pass between Sacramento and Reno. Take a moment on your drive to pull off at the gorgeous Donner Lake viewpoint, remember this grisly bit of history, and give thanks for your warm bed and three squares a day.

Unfortunately, Pando isn’t doing so well. Overgrazing by deer and cattle is killing its young trees, which could lead to full collapse of the organism. Scientists, heroes that they are, are of course trying to save it.

How do you name a peninsula shared between three different states? You combine their names, of course! The 170-mile-long Delmarva Peninsula, which forms the east side of the Chesapeake Bay, owes its name to the combination of Delaware, Maryland, and Virginia, all of which have a foothold on the landmass. Presumably, Virginia goes last because its sliver is the smallest. Hey, fair is fair.

Denali. The stuff of legends. The highest peak in North America, at a staggering 20,310 feet.

Located in the eponymous national park in Alaska, this peak was recently in the news for a name change — or, more accurately, a name reversion. The word "Denali" means "the high one" in the local native Athabaskan language. What a perfect name, right? But as per usual, back in the day some greedy white dude mucked everything up by renaming it after newly elected President William McKinley, who these days is mostly known for being assassinated and succeeded by Teddy Roosevelt (sorry, Billy).

The national park was also called McKinley from 1917 to 1980. It was renamed Denali when it was combined with Denali National Monument. At that time, the Alaska state Board of Geographic Names also restored the mountain’s original name, but the U.S. Board on Geographic Names did not recognize it until President Obama put an end to all that last year, restoring it to its rightful name: Denali.

No word yet on whether President Trump will re-revert it to Mount McKinley. Or, knowing him, Mount Trump.

This beautiful beach is covered in litter. Seriously — it’s strewn with glass from a former city dump site. But the powerful California surf has shaped and polished millions of small shards into smooth pebbles, to colorful effect. (The red ones are old taillights.)

In a twist of irony, the glass at Glass Beach — which, again, is trash — is now protected by the California state parks as a “cultural feature,” which means you can’t remove any garbage from the beach.

Some of these places may sound made up, but they're very real, and they only begin to scratch the surface of what America has to offer.

If you're looking for a breath of fresh air and need something a little more novel than yet another trip to the Grand Canyon, give some of these breathtaking locales a try.

But a quick warning: Like many of Earth's greatest treasures, a few of these spots are in danger from climate change and other forms of human impact. (Glass Beach is basically made of garbage, for cryin' out loud.)

Visit them while you can — or, at the very least, let those catchy names be a constant reminder to always, always act in service of the planet.