Why using comedy to cope with the horrors of the world is nothing to laugh at. 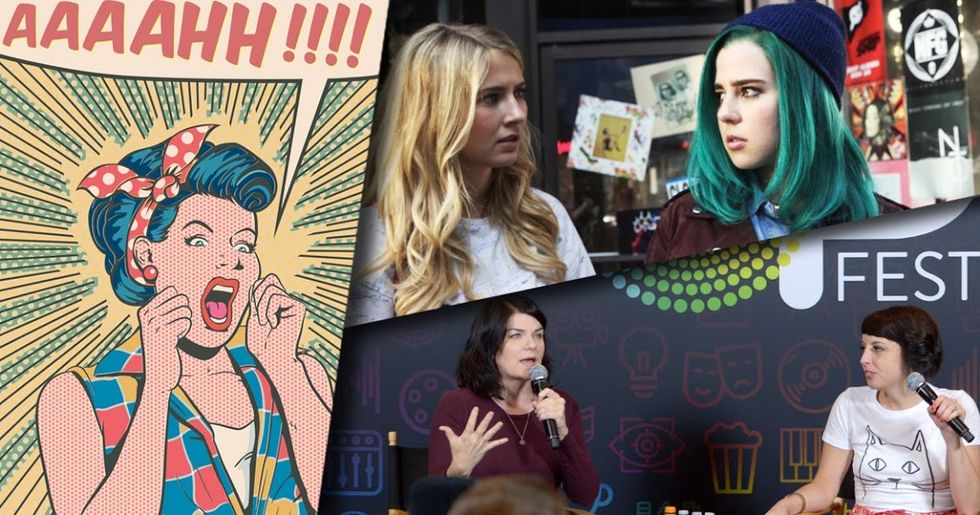 On the surface, "My Favorite Murder" is just another true-crime podcast, a way for people to listen to the highlights of some of the darkest moments in human history.

It attracts listeners — dubbed "murderinos" by co-hosts Georgia Hardstark and Karen Kilgariff — who know things like which serial killer built a "murder castle" (H. H. Holmes) and which one dressed up as Pogo the Clown (John Wayne Gacy).

But there’s clearly more to the story when your fans start cross-stitching memorable quotes and making baked goods with Ted Bundy's face on them. The podcast attracts a certain kind of listener because it offers them the chance to do something they rarely get to do: have a good laugh about murder.

That’s right. "My Favorite Murder" is a comedy podcast.

Blending horror and comedy may seem like an unlikely formula for success, but less than a year after it launched, Entertainment Weekly named it one of the 10 best podcasts of the year.

The desire to talk about true crime is rooted in more than fascination. It’s born from a need to use humor to cope with the horrors of the world.

"Look, I’m scared of dying so … all of this makes me feel better," Kilgariff admitted early on in the podcast. "It’s as if we could ward it off with just our positive verbal energies."

As the creator and executive producer of MTV’s "Sweet/Vicious," Jennifer Kaytin Robinson knows a little something about finding the humor in hard topics. Her show, which follows two female vigilantes who seek justice for victims of sexual assault and other crimes, is also a comedy (albeit a dark one).

Although we can turn a blind eye to the injustices around us, there's a case to be made for acknowledging them and laughing when we can.

Because the reality is horrible things will happen whether or not we’re paying attention.

And these things do happen. If the premise of "Sweet/Vicious" seems absurd to you, ask yourself why two college students — even fictional ones — would have to take this kind of action in the first place. It's not a stretch to believe two girls would get fed up and take matters into their own hands when we live in a country where 1 in 5 women and 1 in 16 men are sexually assaulted while in college and a time in which advocates are concerned about the future of Title IX protections under the current administration.

Grounding storylines in real issues is what makes shows like "Sweet/Vicious" so powerful. Doing so offers victims comfort because they get to see versions of their stories played out on screen. It gives them something to point to and say, "That happens. I know because it happened to me."

"One woman reached out to me on Twitter and told me she was assaulted (and I would never say this if it was a private message; this was a public message) and could never really talk to her dad about it," Robinson says. "And her father and her watch the show every week together ... she told him what happened, but she doesn’t have to get specific because they can just watch. He just understands. He knows."

By leaning into discomfort and finding humor in those experiences, we learn that feeling vulnerable doesn’t mean living in fear.

The creators of "My Favorite Murder" and "Sweet/Vicious" have seen how audience members have been able to regain control of their narratives and better understand their place in the world.

"The most amazing thing about the show is the amount of people who have reached out and said, 'Because of this show, I have gotten help, and I have felt worthy of getting help and deserving of a life, and I have been able to see that this doesn’t define me and isn’t my fault,'" Robinson says.

At the end of the day (or episode), humor offers us one way to take some power back in a world where many of us feel powerless.

And that’s nothing to laugh at.