Why should men pay for maternity care? This woman's op-ed nails it.

'It's called democracy, a civil society, the greater good. That's what we pay for.' 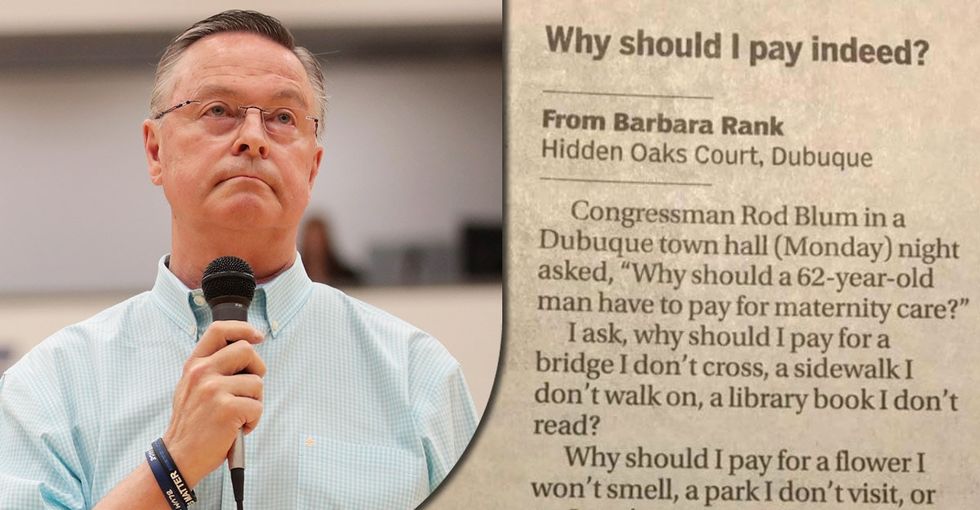 At a town hall event in early May 2017, Rep. Rod Blum, an Iowa Republican, raised more than a few eyebrows with his comments on maternity care.

Blum, who recently voted for the American Health Care Act of 2017 ("Trumpcare"), argued it's "crazy" to expect men's health care to overlap with maternity benefits.

“Get rid of some of these crazy regulations that Obamacare puts in, such as a 62-year-old male having to have pregnancy insurance,” he noted to his constituents.

At first thought, Blum's assertion might seem reasonable — why should an older man's health care plan include pregnancy insurance?

But when it comes to health care policy, the devil is in the details.

This point wasn't lost on Barbara Rank, a retired teacher and a constituent of Blum's, who responded to his comment with a simple thoughtful argument in a local op-ed.

Rank was there at the town hall where Blum's controversial remarks were met with boos and jeers. And even though she didn't say anything in the crowded high school gym that night, Rank made her two cents known in an op-ed in The Telegraph Herald on May 12, 2017.

"Congressman Rod Blum in a Dubuque town hall (Monday) night asked, 'Why should a 62-year-old man have to pay for maternity care?'

I ask, why should I pay for a bridge I don't cross, a sidewalk I don't walk on, a library book I don't read?

Why should I pay for a flower I won't smell, a park I don't visit, or art I can't appreciate? Why should I pay the salaries of politicians I didn't vote for, a tax cut that doesn't affect me, or a loophole I can't take advantage of?

It's called democracy, a civil society, the greater good. That's what we pay for."


To be clear, Rank does misquote Blum from the town hall in her letter to the editor — as a spokesperson for Blum told The Washington Post, "he was referring to the idea of patients being able to choose health insurance policies that fit their needs, rather than one size fits all policies filled with government mandates."

But Rank's point still holds up. The idea that someone pays for government services or benefits they might not personally need boils down to an important but pretty simple idea that keeps democracy afloat: It's the greater good.

When inequality exists anywhere, it's a problem for all of us. When a kid learns something new in a textbook at school, we all benefit. When a family is able to afford maternity care, we all benefit. As Rank's message puts it so simply, in a democracy, we sink or swim together.