When The Rock heard about a sick puppy named after him, he didn't waste time. 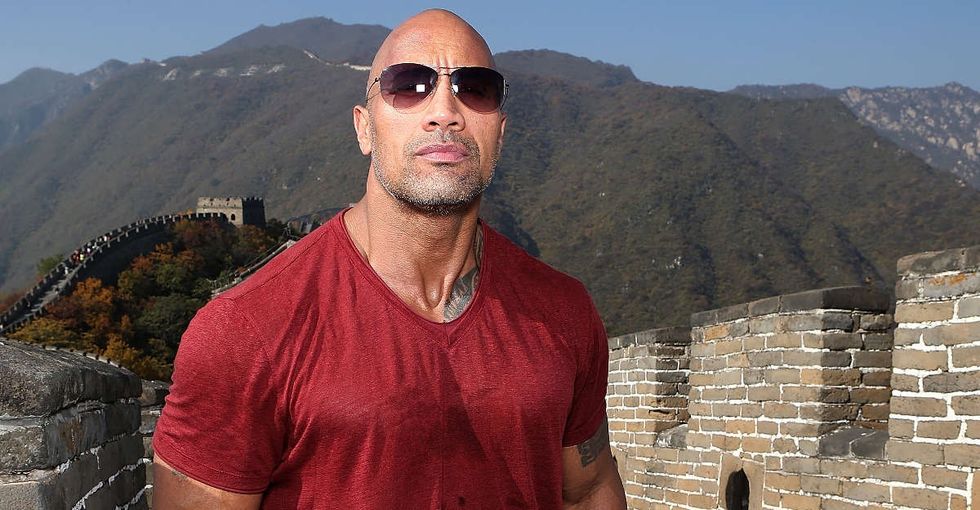 In September, Dwayne "The Rock" Johnson had to make the heartbreaking decision to put his beloved puppy Brutus down.

"As all puppies and dogs do, he ate a mushroom while playing outside with his brother Hobbs," Johnson wrote on Instagram. "This mushroom happened to have a lethal toxicity and within hours it was rapidly destroying his liver and immune system to the point of no return. I encourage all of you out there to be mindful of mushrooms in your yards, parks, or anywhere outside your dogs play."

As tragic as Brutus' death was for Johnson, the actor continues to fight for dogs in need.

Dwayne "The Rock" Johnson, 3-months, is still doing good and getting a lot of love here at Saving SPOT! Anyone who hasn't heard, Dwayne was dropped off at the North Central Shelter with a metal wire wrapped around the bottom portion of his mouth. The shelter removed it gave him 17 stitches. He was also diagnose with a Grade 5 heart murmur. Saving SPOT! took Dwayne in and took him to a heart specialist. After the exam, the specialist said it can be fixed and scheduled the surgery for December 18th. We're raising money for Dwayne and his surgery. You can donate at: https://www.gofundme.com/helpdwaynethepuppy PLEASE SHARE Dwayne's story. @therock #spotrescuedogs
A photo posted by Saving SPOT! (@spotrescuedogs) on Nov 21, 2015 at 6:38pm PST

Just this week, Saving SPOT! — a dog rescue shelter in Los Angeles — took in this 4-month-old puppy who was abandoned. According to the shelter, the dog was found abused, with "a large metal wire wrapped around his mouth," and a severe heart murmur, which would require expensive surgery to treat.

Because of the pup's resilience, the shelter decided to name him Dwayne "The Rock" Johnson.

To which Johnson replied:

That's when, according to a Pix11 report, Johnson proceeded to give $1,500 of his own money to the campaign to pay for (puppy) The Rock's treatment. (The fundraiser ultimately met its goal, and then some.)

The shelter even put the two Rocks together in this fantastic side-by-side shot.

DWYANE UPDATE - Knowing that "the Rock" has got Dwayne the puppy's back, we are confident he will be a fighter and make it through this. Thank you all for your generous donations- thanks to you we have met our goal. Any funds that are raised and not used for Dwayne will go to the more than 60 dogs Saving SPOT! Rescue has now including 5 week old puppies, a dog with mange and breast cancer and numerous orthopedic surgeries. Please help us to continue saving lives. We are thankful for all of you this Thanksgiving! Please donate... https://www.gofundme.com/HelpDwayneThePuppy
A photo posted by Saving SPOT! (@spotrescuedogs) on Nov 25, 2015 at 4:22pm PST

What happened with The Rocks is a reminder that there are still far too many animals in America's shelters.

According to the American Society for Prevention of Cruelty to Animals, approximately 7.6 million pets enter shelters in the U.S. every year. And roughly 2.7 million of those animals — nearly 1 out of every 3 — are ultimately put down.

(Puppy) The Rock was lucky to make his way to a no-kill shelter, which raised the resources for his care, but many animals aren't.

Most no-kill shelters, almost by definition, don't accept every animal for lack of available space. The rest wind up in shelters that euthanize otherwise healthy animals because of overcrowding issues.

The solution is simple: Adopt.

(Puppy) The Rock is one of millions of great animals — puppies, kittens, adult and senior animals — currently living in shelters throughout the U.S.

I got this adorable guy from an ASPCA shelter two years ago:

And there's many more where that came from.

Not only does adopting mean one less homeless animal, it cuts down on the demand for puppy mill dogs, which results in fewer animals turning up in shelters in the first place.

In the meantime, both (puppy) The Rock and The (original) Rock seem to be doing great.

And why not? It's pretty hard not to love this guy.

Dwayne, 3-months, is doing good and has made a lot of new friends. We're half way to our goal for his heart surgery. Please share his story and help us reach our goal! https://www.gofundme.com/helpdwaynethepuppy @therock #spotrescuedogs
A photo posted by Saving SPOT! (@spotrescuedogs) on Nov 19, 2015 at 6:11pm PST

With any luck, he'll make a great family very happy one day.