When his species was on the brink, one tortoise got busy. 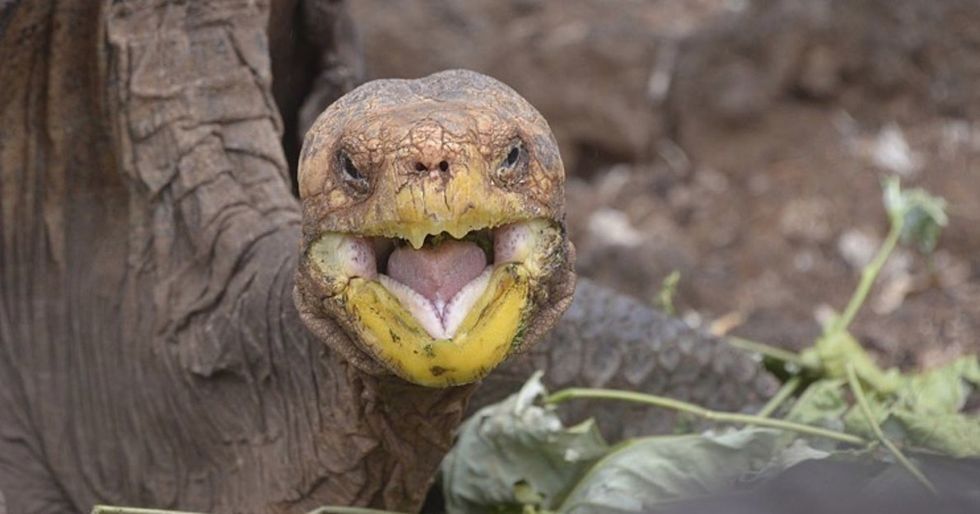 This is Diego. A very happy 100-year-old tortoise.

He's originally from the San Diego Zoo (hence the name) and was brought to the Galapagos Islands in the 1977. He's been living there ever since.

Diego has — almost single-handedly — revived his nearly extinct species in the Galapagos Islands.

Yeah, the old shelled stud has been pretty busy.

Until very recently, Diego's species was in dire straits. For hundreds of years they were hunted for food by pirates and merchants, and before Diego's arrival in the islands, there were only 14 left.

Diego got to work, and it's estimated that he's fathered about 1,700 children so far.

"We did a genetic study and we discovered that he was the father of nearly 40 percent of the offspring released into the wild on Espanola," said Tapia.

Currently, he lives on Isla Santa Cruz with six females. And he'll likely live there for some time as his species can live well past 100.

Along with Diego's natural ... talents ... the revival of the Galapagos tortoise is thanks to some incredible work by conservationists around the world.

Organizations like the Galapagos Conservancy and the Charles Darwin Foundation have been hard at work for decades surveying, studying, and working to rescue endangered species on the Galapagos Islands.

A zookeeper weighs a Galapagos tortoise in London. Photo by Oli Scarff/Getty Images.

It's an appropriate place to do so, too. After all, the Galapagos Islands are where Charles Darwin first took note of the incredible diversity of Earth's creatures and how their appearances varied based on where they live. That observation would eventually lead to his Theory of Natural Selection — which is one of the founding principles for how we understand life and evolution today.

You can call him "sex mad" or a "ladies' man" or even "the most interesting giant tortoise in the world."

I'm going to call him the name he really deserves. Hero.

He's a hero who had the courage, the pluck, the outright valor to do what was right and save his species. Sure it was hard, but did Diego complain? No. Did he crawl back into his shell and cower from the challenge before him? No.

Diego, on the way to save his species. Rodrigo Buenida/AFP/Getty Images.

Diego kept his chin up and walked right into the danger. Slowly. Because he's a tortoise.

Frankly, we should all be a little more like Diego. I mean ... not exactly like Diego. Just, you know, in spirit. The whole "facing challenges" thing.