What happened when the Army finally let women into its elite Ranger School? They kicked butt. 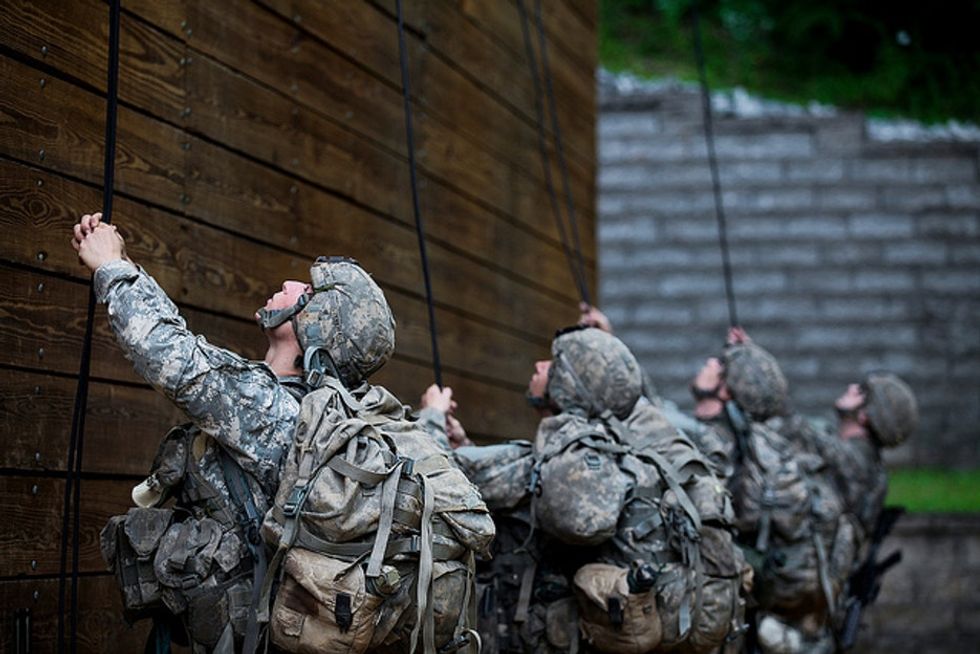 At the entrance to Camp Darby at Ft. Benning, Georgia, there's a black and gold sign that reads "Not for the weak or fainthearted."

And if that doesn't seem so bad to you, it gets tougher. From there, it's weeks and weeks of sleep deprivation, high-octane simulated missions, memory drills, and even more tests of strength and endurance.

Oh, and if you screw something up, you "get smoked," which means you stop what you're doing and start cranking out push-ups, flutter kicks, and other calisthenics until the drill sergeant says to stop, which could be a really, really long time.

Only the toughest men on the planet can make it through all this.

The first women ever — two of them, in fact — are set to graduate from Ranger School this week.

Earlier this summer, a class of 400 recruits entered Ranger School at Ft. Benning, including, for the first time ever (ever!), 20 women. It's all part of an assessment to determine how and if certain types of combat jobs should be open to women starting in 2016.

96 of the 400 recruits made it through the ordeal, and of the 20 women who set out to conquer Camp Darby, two made it through: Capt. Kristen Griest and 1st Lt. Shaye Haver. And, no, they didn't get some kind of watered down, "Ranger School-Lite" experience designed just for the delicate sensibilities of ladies or whatever.

They came right into the boot camp and kicked some butt. As ladies do.

"The key is maintaining standards," retired Ranger Roger Carstens told NBC News. "To lower those standards to fit a quota is a disservice to comrades and country and could result in mission failure."

To pass, the volunteers not only need to demonstrate great leadership, an ability to follow orders, and exceptional mental toughness, they have to complete a grueling series of physical feats: including 49 push-ups, 59 sit-ups, and a five-mile run ... all in under 40 minutes, while starving, sleep-deprived, and being screamed at by instructors.

And having endured all of that alongside their male counterparts, these women are certified battle-ready, according to the U.S. Army.

Still, the female Ranger School grads won't be able to officially join the 75th Ranger Regiment — at least, not yet.

Women in the U.S. are just starting to get their foot in the door when it comes to combat positions. Photo by The National Guard/Flickr.

Time and time again, we've seen that when given a fair chance, women can do anything men can do (and vice versa). And it's looking like the military is finally ready to get with the times and give women a bigger role in high-stakes missions.

In January 2015, the Defense Department said that all military occupations, even combat positions, had to be open to women starting in 2016, though there may be some exceptions. The military is still trying to figure out whether women should be able to join teams like the Rangers or the Navy SEALs, for example.

But according to a U.S. Naval Special Warfare Command study, there aren't any major barriers to integrating women into an all-male SEAL team (meaning, the men they polled on said teams were like, "Yeah, bring it on!") — as long as the women can handle the physical rigors, of course. Which, you know, sort of goes without saying ... because (surprise!) men who can't handle the physical rigors aren't allowed on those teams, either.

If the success of this latest Ranger School class is any indication, we could be seeing women on these elite operations teams some day real soon.

It's about time they were given the chance to prove they belong there.