What a psychological study of police officers reveals about racial profiling.

Researchers have found that even children aren't immune to the racial biases of law enforcement officials. 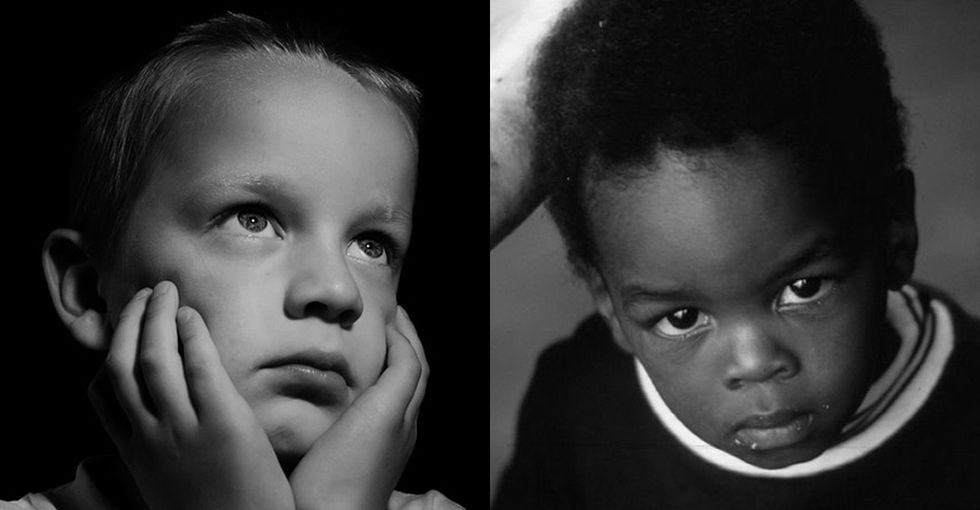 Who did they study?

The researchers tested 176 police officers (mostly white men) and 264 graduates (mostly white women) to see how they think, in a really nitty-gritty way, about kids of different races.

1. Black children are often seen as older than they are.

That may not seem like such a big deal on the surface, but here's why it definitely is.

Kids are universally seen as "innocent" and in need of protection. The older they get, the less those protections apply, right? So when people view and treat kids of color as if they're older than they really are, they're excluding those children from those protections.

In effect, they're seeing black children as less innocent than white children, independent of any wrongdoing. That plays out about like you'd expect when it comes to law enforcement.

2. Police officers are more likely to use violent force against black children.

To a lot of people, that may sound like a no-brainer. But it's the thought behind that use of force that we need to pay attention to.

According to Dr. Phillip Atiba Goff, co-author of the study, the officers surveyed showed "a use of force about three times as high towards black children as towards white children or Latino children." Officers who exhibited dehumanizing views toward black children were more likely to have used violent force against them in the past.

And to tie that back to the first finding, those officers were also more likely to see black children as older and more blameworthy. Goff explains, "In our minds, we represent particularly those young men that we imagine are possibly dangerous to be older than they are so that we're essentially justifying the threat that we feel."

But this shows the power our unconscious biases can have on how we treat other people.

This study is an eye-opener, but the researchers know it's only the beginning of a deeper investigation. Goff acknowledges the limitations of working with a small sample, but he sees it as a necessary first step: "I can't tell you what the rates of disparity are for black children across the country because there are no national data on police use of force or police behavior generally."

This is a problem that we cannot wait to fix.

Goff and his colleagues are working to get that national picture. But police departments shouldn't wait any longer before taking steps to deal with it. Because let's be honest — in communities of color, "to protect and serve" sounds less like a comforting assurance and more like a cruel joke.

Check out the full report here. I'll admit, some of the stats are beyond me. But it's also full of helpful background and context.

Watch a video of Goff and a few others discussing the study: