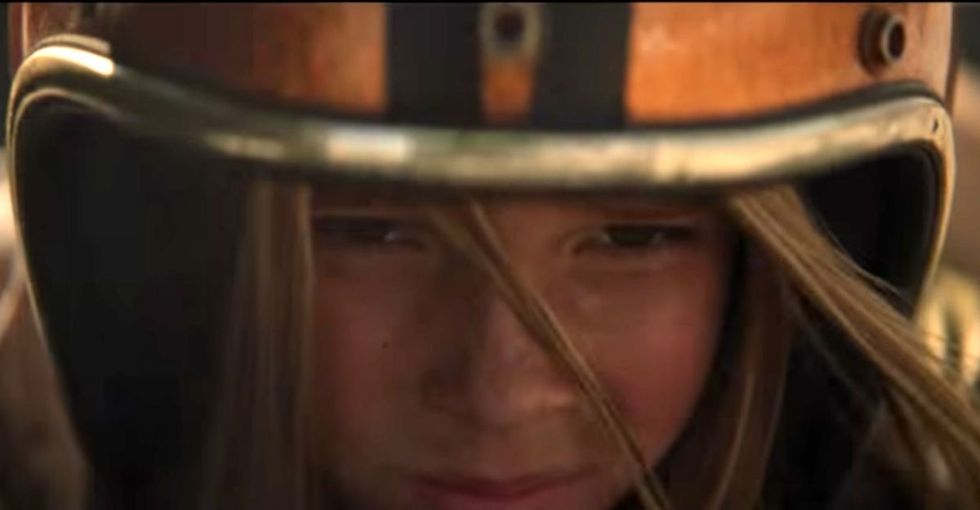 "What do I tell my daughter?"

"Do I tell her that — despite her education, her drive, her skills, her intelligence — she will automatically be valued less than every man she ever meets?"

"Or maybe, I'll be able to tell her something different."

Those are the narrator's words in a powerful new Super Bowl ad by Audi that highlights pay inequity.

Check it out below:

Clearly, Audi's not shying away from using the big game to make a political statement.

Pay inequity, a hot topic on the 2016 campaign trail, has become an increasingly important issue to many Americans.

That 79 cents figure, however, doesn't quite tell the whole story.

There are many factors that play into the wage gap aside from discrimination. For instance, women tend to leave the workforce when they have children (which sets them back on the pay scale in the long term) and are more likely to seek out jobs with more flexible hours at the expense of a higher salary, The Washington Post noted.

There are other social factors at play, too, like the fact women are less likely to negotiate their starting salaries and are more hesitant to apply for a job that they're not 100% qualified for (this isn't the case for men).

But again, that's still only telling part of the story.

The ad received a lot of criticism from viewers who jumped at the chance to explain why they think pay inequity isn't a real problem.

@Audi @TueborFrog exactly the point. Women at Audi work different jobs which accounts for the perceived unequal pay. You made our point.
— Katie Hileman (@Katie Hileman)1485994625.0

As The Wall Street Journal reported, negative comments on the ad's YouTube video far outnumber the positive ones.

And here's where we come to the rest of the story.

The thing is, even when you do account for all the other non-discriminatory factors, like women leaving the workforce to raise kids or not negotiating higher salaries, women are still earning significantly less than men.

"Economists believe that the gender pay gap is caused by complex factors," the report reads. "However, even when all those factors are taken into account, as much as 40% of the pay gap may be attributed to discrimination."

Take salary negotiations, for instance: Yes, women may be less likely to ask for higher pay, but even when they do, they tend to have less success in actually securing it.

Heartfelt Super Bowl ad aside, if Audi wants to make a bold statement about the pay gap, the company should also walk the walk. And from the looks of it, they're committed to closing their own pay gap.

As many pointed out on Twitter, the company certainly has room for improvement when it comes to gender equality in the workforce — just two of their top 14 executives are women, for instance — but the car company has made moves to get better.

In Dec. 2016, Audi signed the White House Equal Pay Pledge with the Obama administration, committing to conduct annual company-wide gender pay analysis and review its hiring practices to reduce gender bias along with other initiatives. Audi says it also supports external programs that empower women in STEM and business fields.

Making a powerful ad is one thing, following through with real-world action is another.

"Progress is in every decision we make, every technology we invent, every vehicle we build," the brand said in a statement.

"Audi of America is committed to equal pay for equal work."