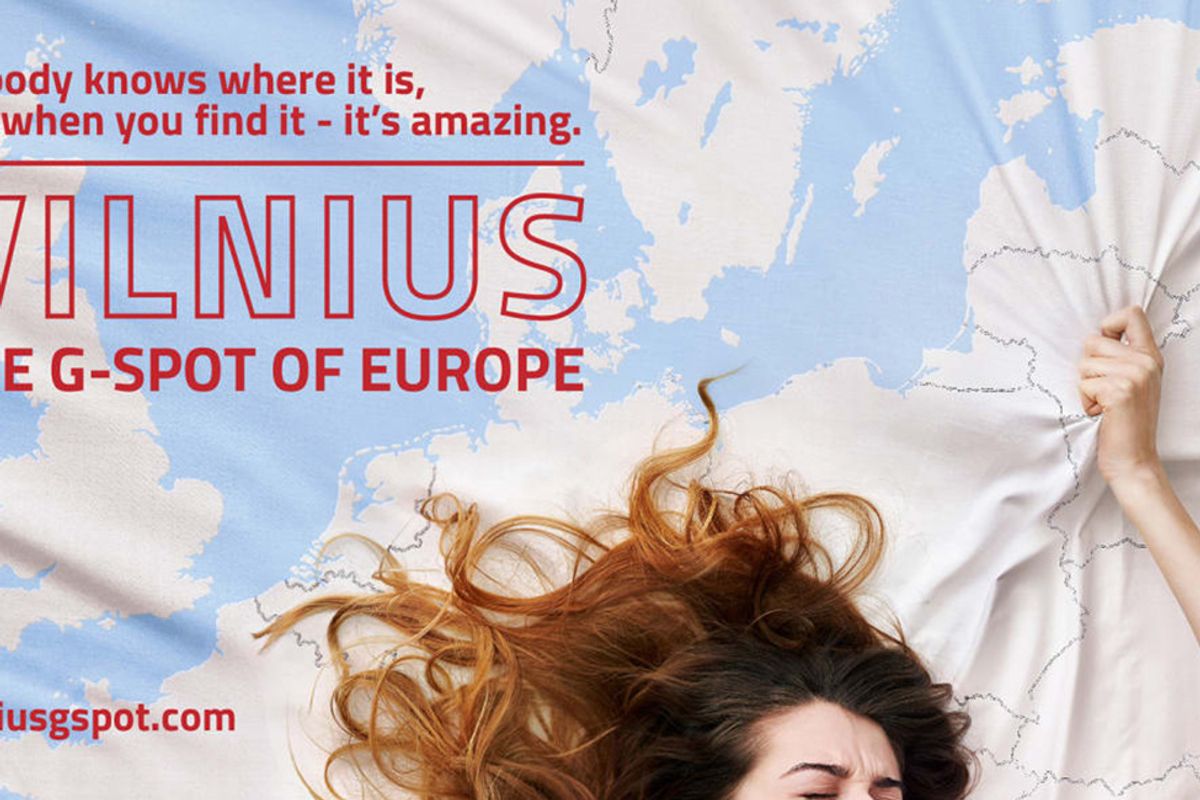 No reward comes without risk - or in the case of Vilnius - risqué. The capitol city of Lithuania has a population of 570,000 and regularly makes lists as an underrated and inexpensive European destination. Lonely Planet called it a "hidden gem" of Europe. In 2016, it was rated the third cheapest destination for a bachelor party in Europe by FairFX. And you've probably never heard of it. In August of 2018, the city started running racy ads to increase tourism, calling it the "G-spot of Europe." The ad features a woman grabbing a map of Europe, clutching the spot where Vilnius is located. "Nobody knows where it is, but when you find it – it's amazing," reads the caption.

VILNIUS - THE G-SPOT OF EUROPE youtu.be

The sexy ads were conceived by students. "As for the insight, we realized that it's true from our experiences abroad when we kept getting blank looks after telling people we're from Vilnius," Jurgis Ramanauskas, who worked on the idea, told The Drum. "Also, we've noticed that foreigners who came to our city or even decided to stay here were very satisfied with their experience. And of course, the seed for all of it was laid out in the brief."

The ads were published on International Orgasm Day, coincidentally a month before the Pope was scheduled to visit the predominantly Catholic country. Lithuanian priests were offended over the ad, and the bishop of Vilnius said the ads present the city as a "sex tourism city." The Prime Minister of Lithuania had no problems with the racy ad itself, but wanted the city to wait until after the Pope's visit to launch their campaign. It did not.

After the ads went up, the U.K.'s Advertising Standards Authority only received one complaint. It rejected the complaint, saying the ad was not "exploitative or degrading" and "unlikely to cause serious or widespread offense." John Oliver even praised the idea on "Last Week Tonight," saying, "If other destinations are smart they will follow Lithuania's lead, and come up with their own adults-only tourism slogans."

Despite the controversy, the image of a woman in ecstasy made people come – to Vilnius. The ad reached an audience of 600 million people, appearing in over 1,000 media publications. 100,000 people visited the campaign's equally cheeky website, vilniusgspot.com. Google searches for the city tripled as people attempted to find Europe's G-spot.

RELATED: Instagram cracks down on these adorable travel selfies

Tourism for Vilnius also increased. In the year since the ads have been out, tourism has been up by 12.5%. Visitors from Germany and the U.K., the primary markets for the campaign, saw a spike, with an increase of travelers up by 37.8% and 20.5% respectively.

The ads also won best destination campaign for a city at the International Travel and Tourism Awards, beating out Dallas/Ft. Worth. As they say, sex sells, and apparently it wins awards, too.

You gotta love a city (and an ad campaign) that doesn't take itself too seriously. Who's up for a trip to Vilnius?