Trump may have signed an executive order, but the crisis he created is far from over. 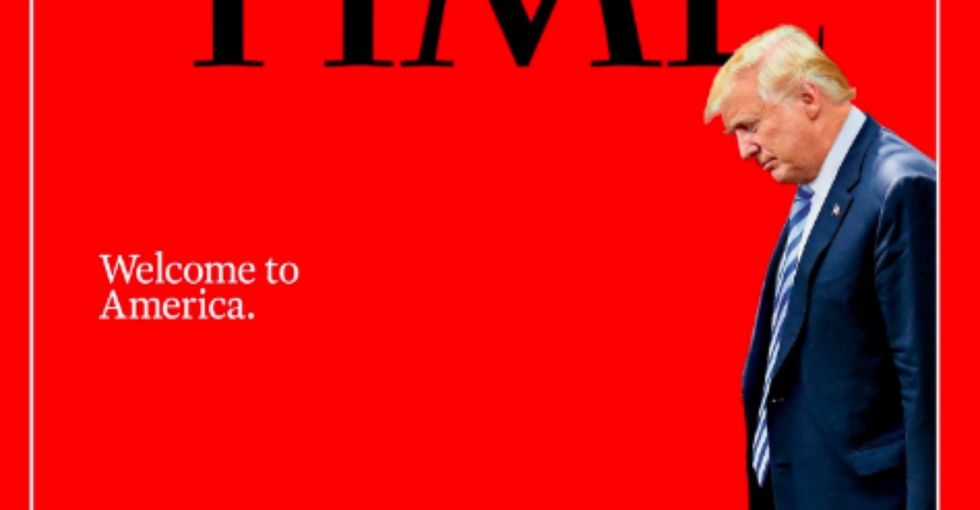 The cover of Time magazine's new issue is horrifying — and, sadly, justified.

An edited image of Trump stands on the right side and gazes down, expressionless, at a terrorized migrant girl, whose photo went viral after her mother was stopped at the U.S.-Mexico border earlier this week.

The cover poses a sincere question to every reader: What kind of country are we?

It's a question many Americans are wrestling with.

After facing intense backlash for enforcing a "zero tolerance" border policy, the president signed an executive order to end the humanitarian crisis his administration created. The policy, deemed unnecessarily cruel to a wide majority of Americans, separated children — including toddlers and infants — from their migrant parents at America's southern border. Children were placed in facilities many have compared to prisons and internment camps. Many were placed into cages.

Now, thousands of children have been left separated from their parents. And, at the time of publication, the Trump administration has no coherent plans to reunite the families it tore apart.

These families are desperate asylum seekers fleeing violence in Central America — including the mother of the small child on Time's new cover.

The teary-eyed girl in pink is a 2-year-old from Honduras who's experienced a heartbreaking amount of trauma.

"The mother told me they had been traveling for a full month and were exhausted," says photographer John Moore, who captured the photo for Getty. "They were taken into custody with a group of about 20 immigrants, mostly women and children, at about 11 p.m."

The girl and her mother were stopped near the Rio Grande River in Texas. They'd traveled 1,500 miles in an attempt to find safety in America.

"I took only a few photographs and was almost overcome with emotion myself," Moore said of the experience.

"Then, very quickly, they were in the van, and I stopped to take a few deep breaths."

While Trump caved to political pressures and ended his policy separating families, the larger story is just beginning.

These kids — and their parents — desperately need our help. They need to be reunited, and they need the financial help to do it.

Learn more about ways you can help asylum-seeking families like this one.