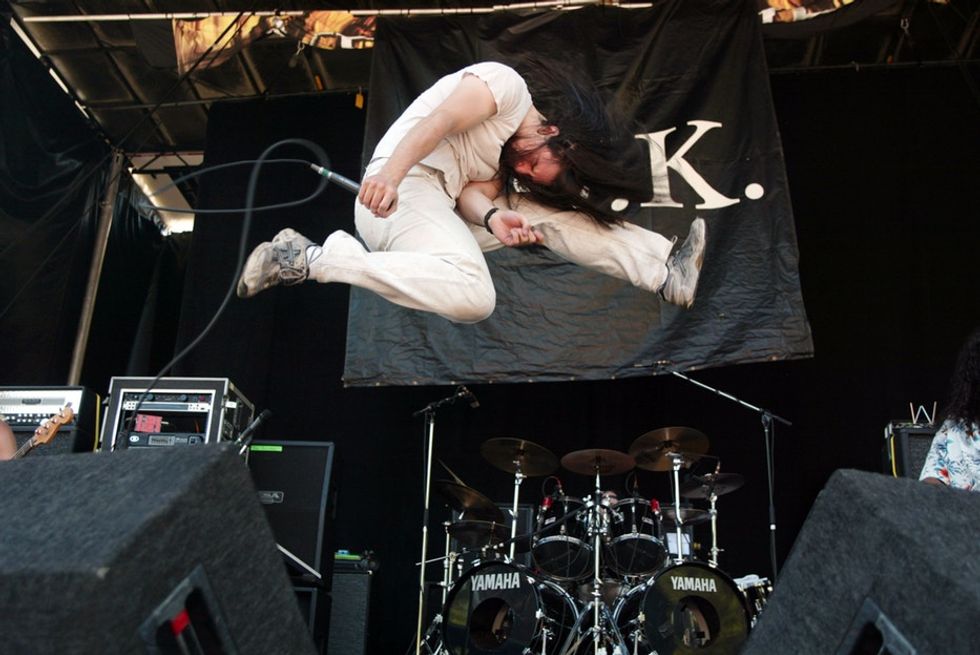 When it's time to politically party, Andrew W.K. will always party hard.

You might recognize Andrew Wilkes-Krier as That Crazy Long-Haired Rocker Guy who sang that "Party Hard" song. Which is accurate. But in addition to his delightfully positive pop-metal anthems about partying and his fist-pumping DJ gigs, Andrew W.K. is a renowned motivational speaker, children's television host, advice columnist for the Village Voice, and an all-around unstoppable force of positive energy.

Also he has a pizza guitar.

But on top of all of that, Andrew W.K. says he is running for president of the United States with his new political party: The Party Party.

"The Party Party is simple in its mission: To free the American people from the dysfunction that is our two party system," Andrew W.K. said in a video announcing his candidacy.

"Most people have become too caught up in the bickering of our news cycles to realize that we ultimately desire the exact same things: reliable access to education, healthcare, and a sense of social equality. If enough people are willing to liberate themselves from choosing left or right, a third voice can emerge with a much more powerful message. [...] If we open our hearts and approach the problems we face with an open mind, real change can be achieved."

This might sound ridiculous coming from a guy who only wears white T-shirts and white jeans, but these 28 tweets show what we could expect from President Andrew W.K.'s Party Party.

1. He believes in gender equality.

3. He plays nice and encourages others to do the same.

4. He believes in the First Amendment.

5. He has a very strong stance on national defense.

6. And he refuses to provoke other countries that we might not get along with.

7. He has an excellent track record on human rights.

8. He is concerned about mental health.

9. He believes in empathy and understands the need to help those who are struggling in the way they want to be helped.

10. He knows that things aren't always perfect, and that's OK.

11. While he supports our capitalist economy, he also understands the dangers of unchecked greed.

12. He is a patriot who believes in American ingenuity, domestic trade, and personal responsibility.

14. He supports NASA and space exploration, as well as geological and ecological sciences.

15. He cares about hygiene. And respect.

17. He has excellent manners, which gives him an advantage in dealing with international relations and diplomacy.

19. He believes in protecting endangered species, such as the unicorn.

20. He respects and values women.

21. He has a strong foreign policy and refuses to give in to xenophobia.

24. He understands the need for employment and educational opportunities.

25. He believes in climate change.

27. He believes in the American dream.

28. He won't give up on the American people.

Does this look un-serious to you? Photo by Scott Gries/Getty Images.

Is he kidding? Is this ridiculous? Is this all a big joke? Maybe. But he does claim to be in the process of filing the proper paperwork, so who knows?

Regardless of whether the Party Party is real or not, it has a LOT of people talking about some important issues.

W.K. is right: There are a lot of problems with our two-party system, and a lot of people are feeling disillusioned and disenfranchised by our current political atmosphere. We all want similar things, and yet we continue to let ourselves get bogged down in the same rhetoric and the same us-versus-them mentality, and we keep voting in the same candidates who continue to hurt us just because their names are the ones on the ballots.

While Andrew W.K. probably won't become our next president, there’s still a lot to be learned by studying the things he stands for, regardless of how wacky and over-the-top they might seem on the surface.

Then again, maybe we shouldn't count him out just yet — after all, there's that other seemingly-absurd celebrity presidential candidate who has made a lot of headway with his anti-establishment rhetoric. But his idea of a "party" probably has less to do with self-empowerment and mutual respect.