This viral post of women getting honest about how they judge each other is a must read. 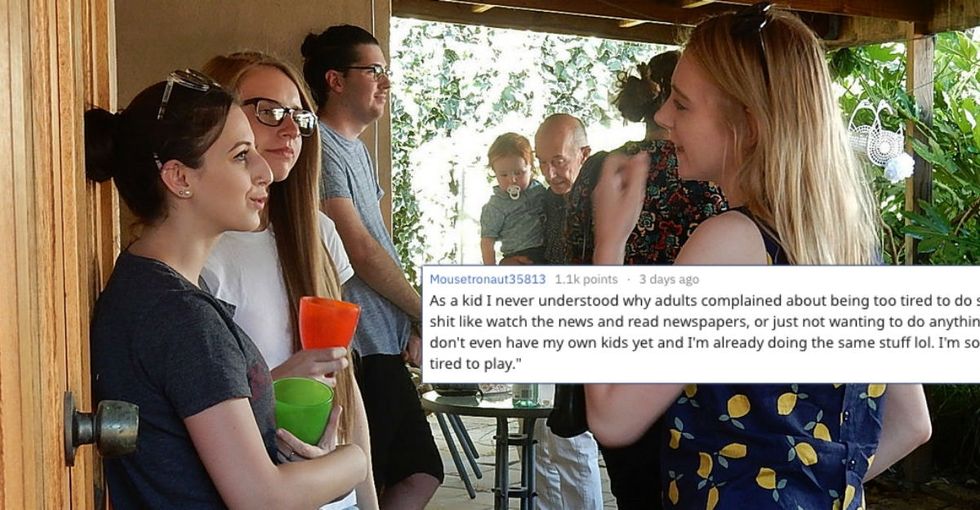 Most of us, if we live long enough, learn the truth in the saying, "Don't judge someone until you've walked a mile in their shoes."

A Reddit user asked, "What was a decision or choice you judged/didn’t understand until you went through it yourself?" and people had a heyday responding. From getting divorced, to being homeless, to staying in abusive relationships, the answers can teach us a lot about seeing other with a non-judgmental eye.

Here are a few of the karma lessons users shared:

Many people said they now understand why their parents always seemed boring, tired, or cranky.

Mousetronaut35813 wrote, "As a kid I never understood why adults complained about being too tired to do stuff, or wanting to do seemingly boring shit like watch the news and read newspapers, or just not wanting to do anything. Why not come play with us kids? I don't even have my own kids yet and I'm already doing the same stuff lol. I'm sorry I ever got upset at adults being 'too tired to play.'"

Another user, meckyborris, said they now understand why their parents always seemed so cranky. "I never understood why my parents were mostly always so irritable. But now, being on the other side, I know that bills, unexpected expenses racking up the credit card, cooking a meal that barely gets touched, repeating yourself 1,000 times, and basically everything else that has to do with being a parent and adult can really piss a person off lol."

A number of people said that they understand why people let go of their ambitions and embrace mediocrity.

A comment by homeschoolpromqueen summed up what many others said about how they used to judge people who weren't striving for more than an average life, but now see that mediocrity has certain merits:

"As a teenager, I was very judgmental of the adults who were just kind of 'meh'—as in, they were basically normal, middle class, bill-paying adults, but they didn't really have much spark or ambition to them. They just went to their boring jobs, phoned it in for another day, got back in their Camry, and drove home to their crappy tract houses to watch mindless TV until bedtime.

At some point, we all realize that we aren't going to be astronauts, and that we've already climbed the corporate ladder as high as it's going to take us. Sure, we could uproot our entire lives and risk everything we've spent the last decade-plus working towards, but why? So we can buy a marginally nicer Camry and tract house?

There's a lot to be said for a relatively easy, comfortable life."

Another user, keakealani chimed in with the reality of what "following your passion" can look like:

"As someone who 'followed my passion' (classical singer), I get it too. I love what I do and really value the privilege of getting paid for what a lot of people see as pointless art, but every so often I fantasize about going back to school and going into a more 'practical, boring' career with stability and benefits.

It's a very tough balance. I don't think I would actually go through with it, but I totally understand why people do, and I work with many many people who sing as a hobby with a 'real job' to pay the bills, which is absolutely a valid option."

Sadly but not surprisingly, many people expressed an understanding of why people don't come forward after an assault.

The repetitive question of "Why didn't they come forward sooner?" after someone speaks out about a past assault has been answered a million times, but many who haven't experienced it still don't get it.

Reddit user CSQUITO wrote: "Not talking about harassment and sexual assault or not reporting it until it was too late... now I’m in that position. I used to never understand why people didn’t report straight away and I thought it was stupid."

Another user, rev9of8, said, "I'm male but I was physically assaulted by a manager (unprovoked, without warning and whilst I was defenceless) at work - an assault for which there was multiple witnesses.

The company not only let him get away with it, they then proceeded to engage in a campaign of bullying, threats, harassment, intimidation and smears intended to silence me and to cover-up what happened. They had me blacklisted and managed to turn everyone I knew against me.

Everything that was done to me ended up utterly destroying my mental health and left me profoundly traumatised. I fully understand why people choose not to come forward."

If you ever wonder why sexual assault victims don't come forward, just look what's happening now to those who do.
— George Takei (@George Takei)1476444125.0

Others chimed in with their own stories of assault reports being ignored,—or worse. For example, systolicfire shared: "I was 17 and was sexually assaulted at work by a coworker who was 23. I was too scared about my parents finding out so I didn’t pursue anything legally but I hoped he’d at least get fired or something after I reported it. Nope, my workplace didn’t even GIVE HIM A WRITE UP. He was still allowed to work with me. Only one of the managers kept him from me, and that manager was the one I initially reported it to within minutes of it happening. Then when I warned my other female coworkers, I was told by a manager that that would make me look bad. I definitely understood why things go unreported so often."

Sharing these kinds of questions and answers can help us be less judgmental, but also help others know they're not alone.

The whole post on Reddit is worth a read, not only to open our eyes to how many ways we might be judging unfairly, but also to show us that so many others may be going through the same thing we are. Understanding is one of the greatest gifts we can give our fellow humans. When people share stories and experiences openly, it broadens our understanding of one another and helps us all feel less alone in our struggles.