This supermodel icon's message about maternal health serves as a huge wake-up call. 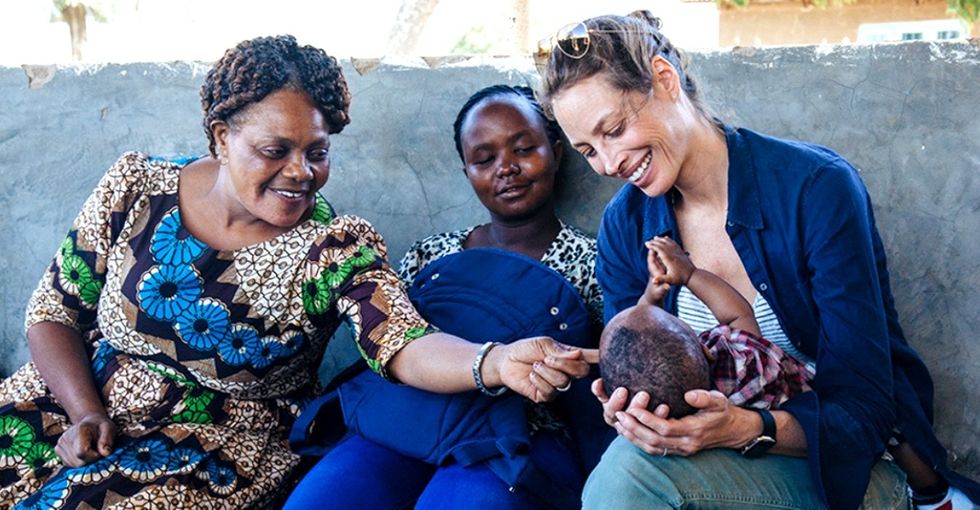 When '90s supermodel Christy Turlington had her first child in 2003, her life changed.

After she gave birth to her daughter Grace, she started hemorrhaging because of a retained placenta. Thankfully, she was in a hospital surrounded by experienced medical practitioners and life-saving equipment, which ultimately kept her out of danger.

The distressing experience led Christy to learn more about the complication she experienced which is when she uncovered some harrowing facts about childbirth.

While a retained placenta only affects 2% of mothers and is usually easily treated in hospital, it has a high rate of mortality for mothers in the developing world.

"In trying to understand what happened to me, I learned that hundreds of thousands of girls and women die each year from the same and other complications," writes Christy in an email.

That was it for Christy. From then on, she made it her mission to break down barriers between mothers-to-be around the world and the health care they need.

Her first major project in this vein was a documentary called "No Woman No Cry." It focuses on the struggles pregnant women and young mothers face in the developing world as well as in the United States.

When Christy traveled to other countries, she saw firsthand just how difficult it can be for women to access proper health care. It was a defining experience and ultimately led her to get her master's degree at Columbia University’s Mailman School of Public Health in 2008.

"No Woman No Cry" ended up being her first of several documentaries that show how small facilitations can often be the difference between life and death.

The documentary came out in 2010, which is also when Christy founded Every Mother Counts — a nonprofit that advocates for improvements to maternal and infant care.

Christy in Bangladesh in 2009 shooting "No Woman No Cry" with crew, Clancy McCarty, Dina Hossain, and Wellington Bowler. Photo by Josh Estey.

"The point of both [the documentary and the nonprofit] is to educate the public about a global tragedy and invest funds raised to improve access to quality and respectful maternity care," explains Christy.

And that's not limited to countries in the developing world.

While 99% of maternal deaths occur there, the United States is only ranked 46 globally in terms of maternal health. In fact, maternal mortality in the U.S. is on the rise.

According to estimates, every nine minutes, a woman suffers from a life-threatening birth complication in this country. And since 1 in 4 Americans live in areas where medical care is scarce, a disproportionate number of those complications can lead to death.

Perhaps the most upsetting stat, however, is that 98% of maternal deaths worldwide are preventable.

Thanks to Christy and her nonprofit's tireless efforts, these issues are finally getting the attention they deserve, and things are slowly but surely starting to change.

Happy International Women's Day! To celebrate #IWD2018, members of the Every Mother Counts team are in Washington, D.C....

Posted by Every Mother Counts on Thursday, March 8, 2018

Change, however, won't happen without improved access to three things: transportation, skilled medical attendants, and medical supplies. It might sound simple, but in countries where women have to walk miles just to get clean water, they're often incredibly hard to reach.

Every Mother Counts' priority is to increase access to these life-saving elements in the United States, Bangladesh, Guatemala, Uganda, Tanzania, India, and Haiti. So far, their work has positively affected the lives of over 650,000 women and children to date.

And they're not alone in their fight to improve maternal care worldwide. In 2010, Melinda Gates announced that the Gates Foundation would invest $1.5 billion over five years promoting maternal and child health, family planning, and nutrition in developing countries. And just this month, they declared they'll be adding another $170 million to that.

What's more, Maybelline — the beauty brand that Christy has represented for years — has stood behind her activism every step of the way.

You don't need to have a ton of money or influence to support this issue though. The nonprofit's site has a number of different ways you can get involved.

Inspired everyday by our founder, Christy Turlington Burns who completed the Kilimanjaro Half last month & the London...

Posted by Every Mother Counts on Wednesday, April 29, 2015

You can follow Christy's example and be a running ambassador for the cause. There are official charity races you can participate in, too, or you can simply run on behalf of Every Mother Counts in the race of your choice.

Not a runner? No problem — you can also host a fundraising event or pledge to support bipartisan, no-cost legislation that will bring midwives and obstetricians to areas in the U.S. that are lacking them.

No matter your ability or capacity, you can be a part of the social change so desperately needed all over the world. As long as you have the drive, you can make life better for moms and new babies alike.

It just means taking your good intentions and acting on them as soon as possible.

Christy offers this Martin Luther King Jr. quote for inspiration: "The time is always right to do right."