Mom won't let her son accept his perfect attendance award, saying it's unfair to other kids. 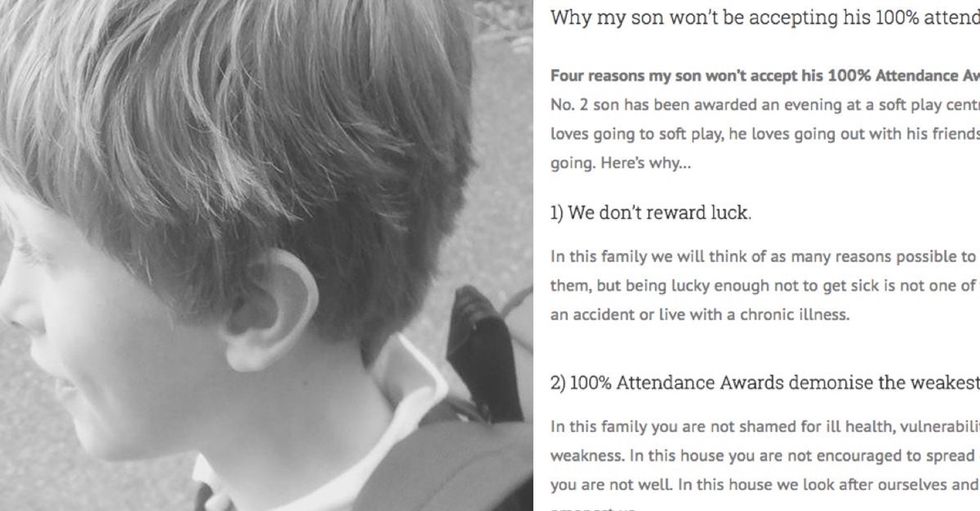 You remember what it was like as a kid.

At the end of every school year, there was a ceremony, or at least an announcement of some kind, where a handful of students would receive an award for "Perfect Attendance."

There was much applause and admiration for these heroic kids.

Maybe you got one of these awards yourself. Maybe you simply sat there feeling strangely bad about the one time you had a cold and had to stay home.

If only you had gutted through it, you could have had some of that applause, too.

Well, one mom has had enough of perfect attendance awards. In fact, when her son's school offered him one, they turned it down.

In a post on her blog, U.K. mom and author Rachel Wright wrote about the experience and her reasoning behind the decision.

It might sound strange at first, but she makes a lot of great points. Her biggest gripe? Kids can't control who gets sick and when:

Can you imagine a work place that at the end of each week marked out all the people who hadn't been sick? Where all the departments with the least number of people off were rewarded — in front of everyone else? It happens in schools all the time.

Can you imagine what kind of atmosphere that would create with people who had days off because of bereavement, mental health problem or chronic conditions? What on earth are we teaching our kids about value and worth? What are we teaching them about looking out for each other and looking after the sick or disabled in our community?"

Wright goes on: Most school-aged kids have very little control over whether they get to school.

After all, it's a heck of a lot easier to get to school amid rain and snow in Mommy's 4-wheel-drive SUV versus the public bus. And kids with health problems or chronic illnesses? They don't stand a chance.

"He had no control over his attendance," Wright wrote. I took him to school and it would have been my decision to keep him off. I should get the reward (or not) for his attendance."

The blog post has gone viral, with comments pouring in from parents around the world who share Wright's frustration for this arbitrary form of celebration.

"The worst time was in primary school when [my daughter] repeatedly 'lost' her class the class award, and was bullied because of it," wrote one mom.

"In a work place, this would never be acceptable, but we allow this to ... happen for our children," added another commenter.

While it's not a bad thing to celebrate kids for commitment and hard work at school, we ought to give some more thought to how we do it and whether we want our kids growing up believing that never taking a day off is something to aspire to.

From Your Site Articles
Education & Information