This man mentors kids by repairing their bikes. Then NASA thanked him. 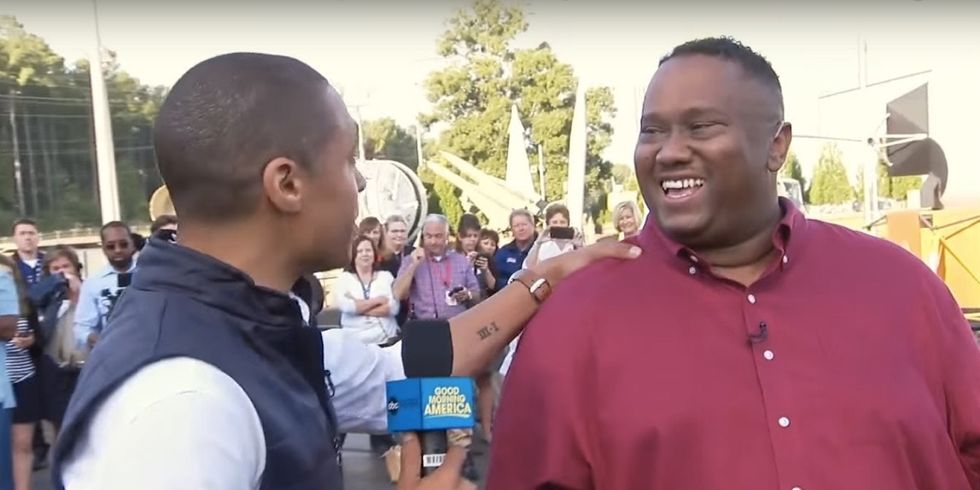 Trent Griffin got a surprise when NASA Cmdr. Scott Kelly sent him a special thank you on ABC's "Good Morning, America" — live from space.

Griffin volunteers with the local Juvenile Conference Committee for underserved youth, visits schools to teach kids science experiments to do at home, and is the president of the Northwest Huntsville Neighbor Association.

But that's not the only reason why the NASA commander wanted to give Griffin some praise. A year ago, he came up with another idea to engage with local children in a positive way — and it has to do with bicycles.

Griffin acquires used bikes and donates them to kids.

Griffin with some of his "bike kids". Image via ABC/YouTube.

The idea came to him when he saw a kid riding a bike with no tire on one of the wheels, says Griffin in an interview with WHNT 19 News. Then he found out the child shared the broken bike with five other siblings.

So Griffin picked up some bikes from a thrift store and restored them for the kid and his siblings.

They were really happy to have them, he says, and soon word began to spread. Other kids showed up to ask about acquiring a bike or getting their own repaired, and Griffin just couldn't say no.

But he added a catch.

In exchange for the bicycle, Griffin has the kids he donates them to sign a "contract."

The contract asks that each kid respects their parents, finishes their homework, tries to get good grades, and maintains their bicycle. The attention and motivation seem to be working, too.

"When I went to go talk to a school at an awards ceremony, turns out one of my bike kids got the most improved behavior," Griffin shared with WHNT 19 News.

Oh yeah, and that thank you from NASA's Cmdr. Kelly? It was particularly special because of another role Griffin wears:

That's right — this guy's day job has him doing stuff like helping build a new facility for the International Space Station.

Kelly explained on "Good Morning, America" why Griffin is a hero, both in his community and at NASA:

"A lot of people look up to astronauts because we fly in space, but we really, really rely on the people on the ground ... people like yourself that help us do our job up here and make our lives safer and easier,” Kelly said. “But what I really look up to are people that do things when they don't expect any recognition. And I think that's what you do by donating your time and by getting these bikes for [these kids], and getting them to be in a position someday where they can be successful adults."

Kelly also announced that 50 brand new bicycles would be donated for Griffin to give to more local kids.

For his part, Griffin hopes what he does will inspire people to come together, he says, "as part of the village helping kids find their direction."

Giving kids the stuff they want with the training they need is definitely an idea worth passing along.