This Filipino holiday tradition has made its way stateside. And people are loving it. 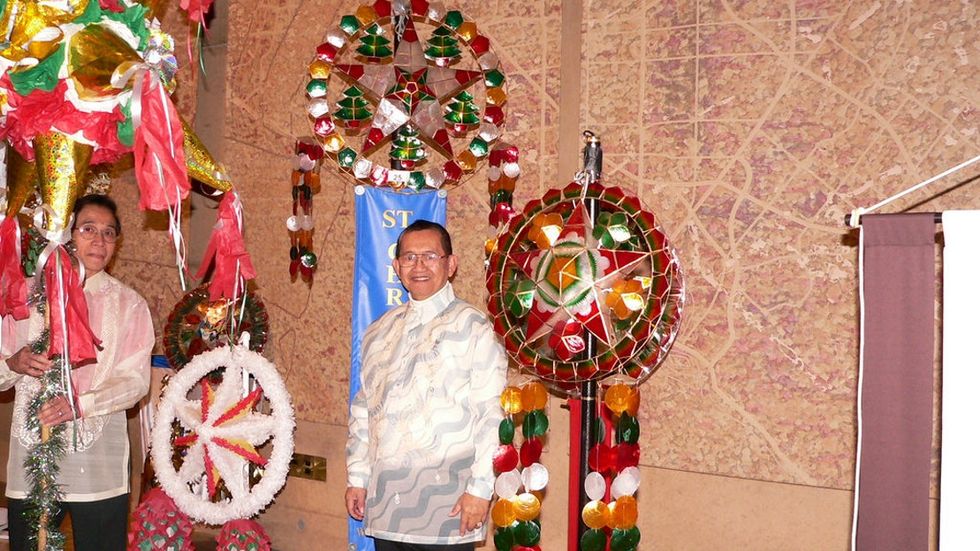 Have you ever gone to Christmas Mass at 4:30 in the morning? For nine days straight?

You wake up at dusk, walk to church, run into people you don't see a lot, sing holiday songs half-awake, and when Mass is over, you usually eat traditional street food.

It's all part of a holiday tradition in the Philippines called "Simbang Gabi" or "Night Mass."

I grew up in the Philippines, and let me tell you, Simbang Gabi is an institution there. Plus, the Christmas season starts the moment we enter the "ber" months (yes, Christmas songs start playing in September), so it's only fitting that Christmas Mass should last over a week.

In the Philippines, there's no shortage of decorations come Christmas time. Image by Patpat Nava/Wikimedia Commons.

When I did it that one time, I wasn't a huge fan. (Granted, I was an 11-year-old kid who preferred playing PlayStation to going to school, so really I didn't like anything non-PlayStation-related.) In fact, I never did the full nine days again. I'd go to one, maybe two. Some years I didn't go at all.

But as I got older — and especially since I moved to the U.S. — I started to miss it over the holidays. I realized just how special those moments were and how they brought me closer to the people I love.

Luckily, Simbang Gabi has made its way around the world, allowing many Filipinos abroad to feel closer to home.

A Simbang Gabi celebration at the Los Angeles Cathedral. Image (cropped) via Beyond Forgetting/Flickr.

Aileen Yosuico, coordinator of Simbang Gabi at St. Jane Frances de Chantal in North Hollywood, remembers very well how it all started at her particular parish — with a group of parishioners who just wanted to continue a tradition.

"It started out as just one evening Mass instead of the early morning Mass, held between the 15th and 23rd of December," writes Yosuico in an email. "This year, instead of just one Simbang Gabi Mass, we will start observing the 9-day Christmas Novena from Dec. 16-23rd at 5:30am."

Traditionally, a Simbang Gabi Mass can start anywhere between 4 a.m. and 6 a.m. No, that's not a normal hour for most people to go to Mass. But remember, this isn't a normal Mass.

"The Mass starts with a procession of lanterns, children carrying poinsettia flowers and the singing of traditional Filipino Christmas carols," adds Yosuico. "Everyone in attendance is encouraged to wear the traditional barong or Filipiniana garb. After the mass, a reception of traditional Filipino food follows at the gym and is accompanied by a program of song and dance numbers, raffles and games."

The choir getting ready for Simbang Gabi. Image via Jonathan Soriano, used with permission.

Even better, other cultures have caught on to the celebration. And of course, being Filipino, we welcome them with open arms.

Today, over two dozen churches in the area surrounding St. Jane's have started their own Simbang Gabi as well, opening the celebration to all communities looking to add something special to their Christmas spirit.

Dr. Maria Ruby Minosa, one of the Simbang Gabi committee members at St. Jane's, notes in a separate email, "We are a loving people and welcome with wide arms all colors of humanity. The way we celebrate is always like a party."

And really, who doesn't love a good party?

It's all about bringing people together. Image via Jonathan Soriano, used with permission.

"I think when the other cultures see how happy and loving we become during our Christmas celebration, they want to experience it as well," writes Minosa.

At the end of the day, that's what Simbang Gabi is all about — community, celebration, and becoming closer with one another.

I didn't realize it when I was younger, obviously, but everything Simbang Gabi stands for is a big part of who I am as a person. It also symbolizes what makes holiday traditions in general so special for millions around the world. After all, what better time to come together and open your hearts to the people around you?

And while you're at it, why not make it a party?