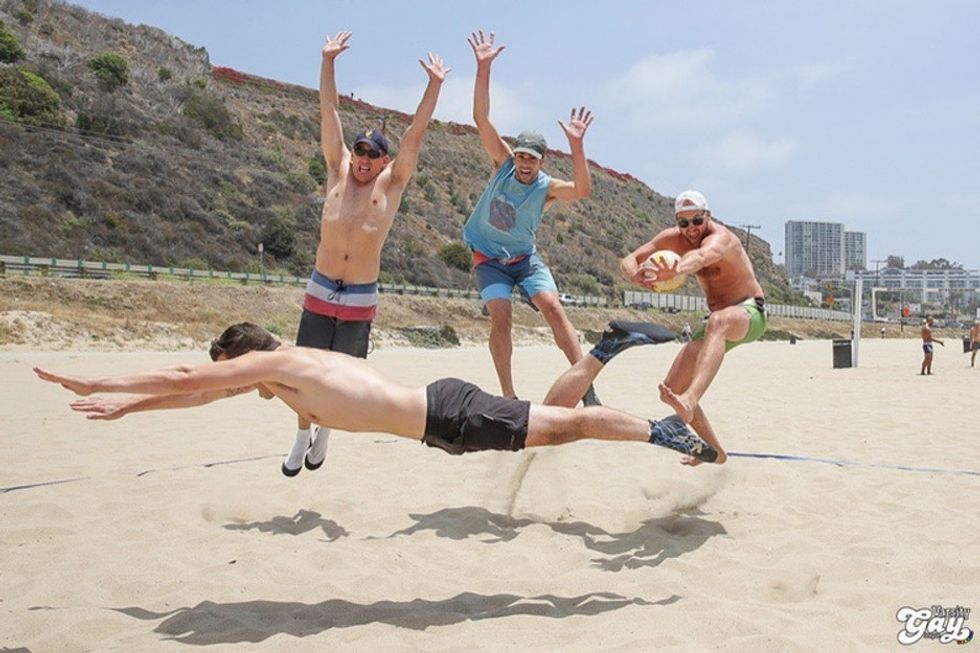 Growing up, dodgeball was one of Darius Soler’s biggest fears.

A game where the kids who bullied him for being “big and gay and effeminate” could all target him with plummeting balls? Hard pass.

One day, when Soler was dodging gym class, the teacher found him curled up in a bathroom stall, feet propped on the door to conceal his presence. The coach then forced him to go to gym and “everyone threw balls at me — it was all of them, versus me,” remembers Soler.

Not surprisingly, as an adult, Soler thought his dodgeball days were far behind him — until his coworker invited him to watch his gay dodgeball league play.

A rush of anxiety overcame him as he watched the game — everyone was being hit by balls — but in the end, all the players united on the court, friendly, laughing, and apparently, all on the same side.

Seeing the camaraderie between players completely changed Soler’s vision of what a dodgeball game could be about. He joined the very next season.

Missing these guys so much! First Monday without my sister's in navy blue and I didn't know what to do. Long Live...Team Gym Bar! Thankful to have been on such an amazing team. #dodgeball #gaydodgeball #bigappledodgeball #bigapplerecsports #TeamGymBar #DoesThisMeanImAnAthleteNow #seriouslydoesit #DontForgetLegDay

“Now I love it,” he says. “I turned my fear into my strength and have grown a lot. Dodgeball has taught me a lot about camaraderie and I’m very grateful that I found my tribe.”

“I didn’t have my gay friends, and now I have a bunch,” says Soler. Today, he plays on an all-black, gay dodgeball team. “I’ve never been on an all-black gay team of anything,” Soler says of the “family” he’s found.

This past Pride, Soler came out as trans and gender nonconforming, and says that the safe space built through the dodgeball league has offered immense support in realizing his identity.

“It’s been integral to who I’ve become. I don’t have a fear of showing who I am,” Soler says. “Everyone celebrates who they are.”

Soler’s far from the only person who has found a new community thanks to LGBTQ sports clubs. However, unlike him, Henry was actively looking.

When Henry (who’s name has been changed to maintain his privacy at work) first moved to New York City after college, he was struggling to build a gay group of friends. Some of his college friends had also moved to the city, and he was slowly building up a professional network. But when it came to building a tightknit circle of people who shared the same sexual orientation, he didn’t know where to start.

“I wasn’t looking for a relationship or a hookup. I just wanted friends,” he says.

An introduction to LGBTQ dodgeball through a colleague led Henry to sign up for kickball and bowling teams as well. And before long, he had a close-knit group of friends that he now regularly enjoys brunch and exploring New York with.

Congrats to all of the Big Apple Dodgeball teams that participated in the Sin City Classic over MLK Jr. Day weekend! You made NY proud by showing up and showing out. Well done!

“People always say it’s so hard to make friends, specifically in the gay community,” he says. “But gay sports provided me a group of gay best friends — I don’t know where else you’d get that. It’s an opportunity to meet hundreds of people you already have something in common with — you have nothing to lose.”

In Los Angeles, Andrew Miller had a similar social struggle.

He had moved to L.A. over a decade before he found his LGBTQ sports league, and though he had a small cluster of gay friends, “They weren't the closest of friends, but they were my gay friends. The only activities we could do together were going out in West Hollywood,” he says.

Five years ago, a coworker asked Miller if he wanted to join Varsity Gay League, and Miller was intrigued by the “opportunity to meet other gays [who weren’t] in a bar scene.” He was eager to socialize with like-minded people and build a new support network.

Almost instantly, he felt like he belonged to a “chosen family.”

“This has nothing to do with the sport. No one signs up to win a game of dodgeball, kickball, or volleyball. They sign up to be part of a community,” Miller says.

“You’d be shocked at how not good people are at the games, but we all have fun.”

When he started playing, Miller could barely catch the ball, but now, he’s taken on the role of director of operations in the organization.

For athletes who have been playing sports since childhood, LGBTQ sports organizations also offer the space to continue a lifelong hobby with their community.

In Boston, 32-year-old Stacey Furtado, who has played basketball since middle school, runs the Boston Women’s Gay Basketball League, a collective of 14 teams made up of 125 women, who range from former professional players, to women who have barely dribbled a basketball in their lives. Teams are drafted to equally distribute the athletic talent (or lack thereof). The most important element, as Furtado puts it, is making sure that every player feels welcome and that they’re building community.

“Last year my team was seventh in the rankings, but number one in our social hearts,” says Furtado. In fact, several players who met in the league have gotten married and “umpteenth relationships” have been born from games and socials.

“The pressure is off when you meet people through a sport,” Furtado says, “We’re all looking for friendships probably even more than love. The most rewarding thing is when you see that happen. People really find community.”

For those who are not athletically inclined, Furtado recommends going to an LGBTQ sports game to cheer on the players. “It’s a positive, active, fun environment,” she says of spectatorship.

Building a tight-knit circle of friends as an adult is hard, especially if you’re a marginalized person looking for similar people to bond and empathize with.

Though all these individuals came to their LGBTQ sports teams with various athletic background and ambitions, they all joined athletic leagues in search of the same thing: community.

Despite life’s ever-changing struggles — be it feeling like an outsider on the playing field or lacking a strong, supportive community as an adult — LGBTQ sports connect people in unexpected, stigma-defying ways.

This story was produced as part of a campaign called "17 Days" with DICK'S Sporting Goods. These stories aim to shine a light on real occurrences of sports bringing people together.