This artist is using tons of plastic garbage to make an urgent point about waste. 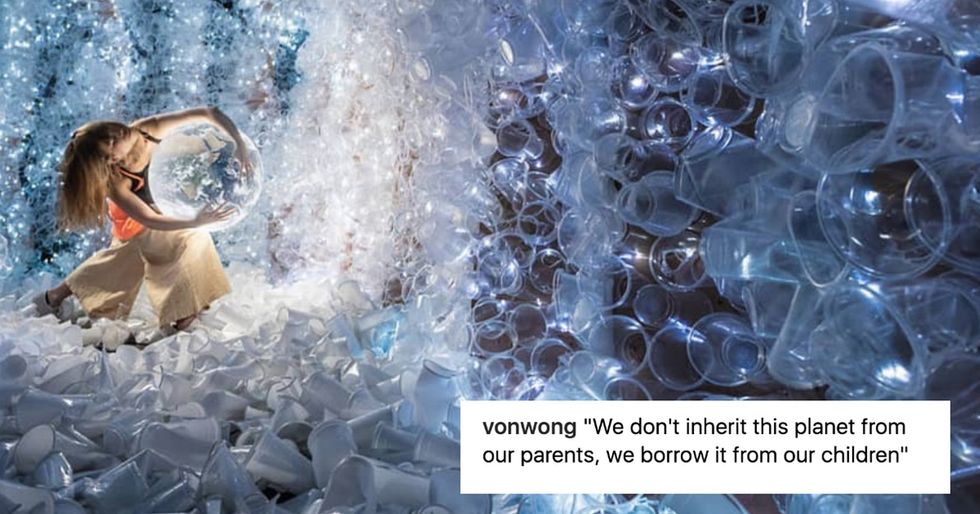 Over the past several years, artist Benjamin Von Wong has been on an amazing journey inspiring people to reconsider what they throw away.

It started with a trip to Guatemala and an up-close photoshoot of a massive trash heap there, and quickly morphed into a series of projects designed to confront people with various aspects of the world's waste problem.

As an artist, however, he wanted to do it in a way that would get people to look first before he unloaded harrowing facts about waste on them. There's so much alarmist news out there about what we're doing to our planet that, frankly, after a while, many of us end up turning off to the problem. Von Wong's method of turning trash into something beautiful to get our attention is a different, perhaps more productive approach.

"We don't inherit this planet from our parents, we borrow it from our children" #plastikophobia was made with the help of @imaginator_studios out of 18,000 cups collected over the course of just 1.5 days thanks to @nea_sg. It's up at the Sustainable Singapore Galleries for the next 5 weeks for anyone that wishes to experience it and share it with their friends and family. Make sure to watch how this was done in my bio link! Model: @lifeofapotatodancer Light globe: @bron.sg

"As human beings, we go through so much sh*t," noted the artist in a blog post on Bored Panda. "Every day, we make dozens of small decisions to buy more stuff – at the supermarket, malls, online… For most of my life, I didn’t think it mattered. After all, I was just one person, making a couple of small decisions."

"But one day, I found myself in a landfill surrounded by an endless mountain of other people’s small decisions and realized that maybe those small decisions did matter."

So, with a veritable army of like-minded volunteers, he created a series of waste-based art installations to help wake others up and see the problem that's all around them.

He put a mermaid in a plastic sea of 10,000 bottles — the same amount the average person uses and throws away in a lifetime.

Next time you're on the beach, look down and see how much plastic you find. It's horrifying. #mermaidshateplastic Animatiom by @costachescu

He created "Toxic Laundry Monsters" to bring the chemicals and micro-plastics that are released every time we do a wash to life.

These aren’t just monsters, they represent a real threat. #fixtoxiclaundry www.toxiclaundry.com to see how they were done!!

His latest piece, "Strawpocalypse" is meant to showcase the enormity of the plastic straw problem. It took him and his crew 6 months to collect 168,000 straws recovered off the streets of Vietnam to complete the waves.

By the year 2050, there could be more plastic than fish in the sea. It sounds crazy but when you look at the combination or overfishing and the hockeystick production of plastics... That's when things start getting a little crazy. It sounds like a tiny thing to stop using a straw but all change start small! #strawpocalypse Model: @tyhdtyhdtyhd Plastic straw fish: @nikkytran Straws collected by @zerowastesaigon and @starbucksvietnam

In partnership with Laura François and her nonprofit, clothingtheloop.org, Von Wong took thousands of garments that were left in an abandoned factory in Cambodia and made several installations to accent how wasteful the fashion industry has become. You can check out how they made them here.

And this plastic cave was made from 18,000 cups that were collected from a food court in just one and a half days. It really puts that "by 2050 there will be more plastic than fish in the ocean" statistic into perspective.

What if everyone of us could become a little bit more plastikophobic? With less than 10% of plastics recycled every single year, we're starting to run out of time to save our oceans. Tag a friend that lives in singapore. The installation is up, photo ready and free to shoot at. Let's spread the #plastikophobia

The point of all of this, Von Wong hopes, is that more people will start to change their consumption and waste habits. If nothing else, his art shows that one person can make a difference. A big difference.

We're up against a mounting problem, and that can feel overwhelming, but if you pick one thing today — whether it's plastic straws, bags, bottles or how you buy clothes — and make a decision to be more mindful about it, you'll be taking a significant step in the right direction.