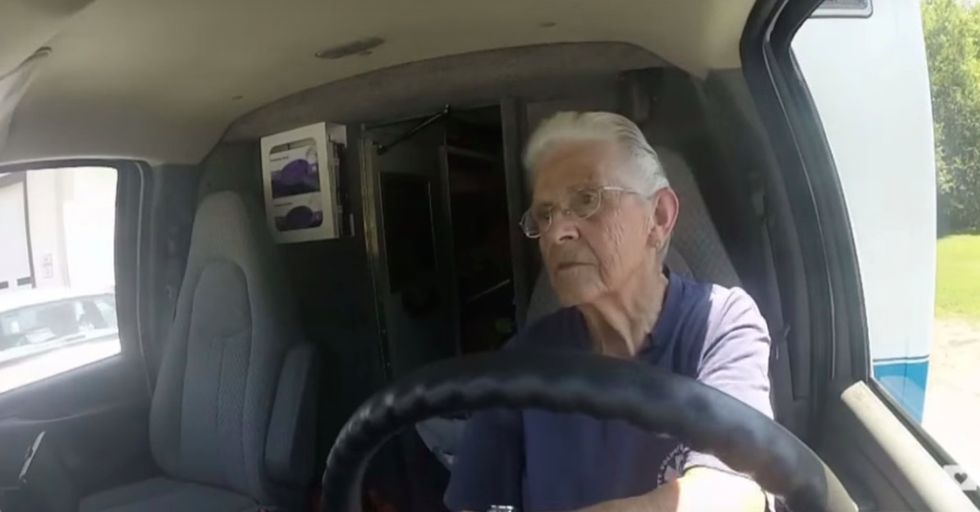 Edna Mitchell once drove into a snowstorm to help a man who thought he was having a heart attack. He was shocked when she showed up.

It's not every day that an 87-year-old shows up in the middle of a storm to take care of you.

“What's an old woman like you doing out on a night like this?" he asked her, as she recounted to the Bangor Daily News.

She simply replied, "Do you want to go to the hospital or not?"

He sure did. And he was able to, thanks to Edna and her crew.

She's been driving the streets of Liberty, Maine, for the Liberty Fire Department since she got her EMT certification in 1978.

37 years later, she's still behind the wheel, responding to medical emergencies as intense and urgent as you'd imagine.

"I exercise, try to stay healthy, take vitamins. I swim every day. I don't drink, smoke or swear," she told the Bangor Daily News. "I used to say I don't have any fun, but I do."

Just working on her fitness. She'd school me on push-ups!

Edna says she first became interested in the medical field during World War II in a first-aid class as a high school freshman. But it wasn't until her long teaching career came to an end that she decided to give it a try.

While many look at retirement as a time to kick back and relax, Edna went in the opposite direction — with her foot on the accelerator.

If you see her as an inspiring woman, you're not the only one. Some of her grandkids and great-grandkids have even pursued EMT careers because of her work.

It is my honor to run with Edna Mitchell," Liberty Fire Chief Bill Gillespie told USA Today. "People have a sense of relief to know that Edna is there. There's been a lot of times Liberty Ambulance wouldn't have rolled out the doors if it wasn't for Edna. She is amazing. She is a tough, tough woman."

Edna's a tough and inspiring woman, indeed. And she gives us all a joyful reminder that it's never too late to try something new.

Bravo, Edna! Hear more of her incredible story (and watch her dominate those push-ups) in this fun Humankind interview.