They went to war but felt uneasy when they got home. So they stuck their hands in some dirt.

Sonia, Althea, and Anna went to war but felt totally different when they returned. Filmmakers Christine Anthony and Owen Masterson tell their story in an awesome film called "Terra Firma." 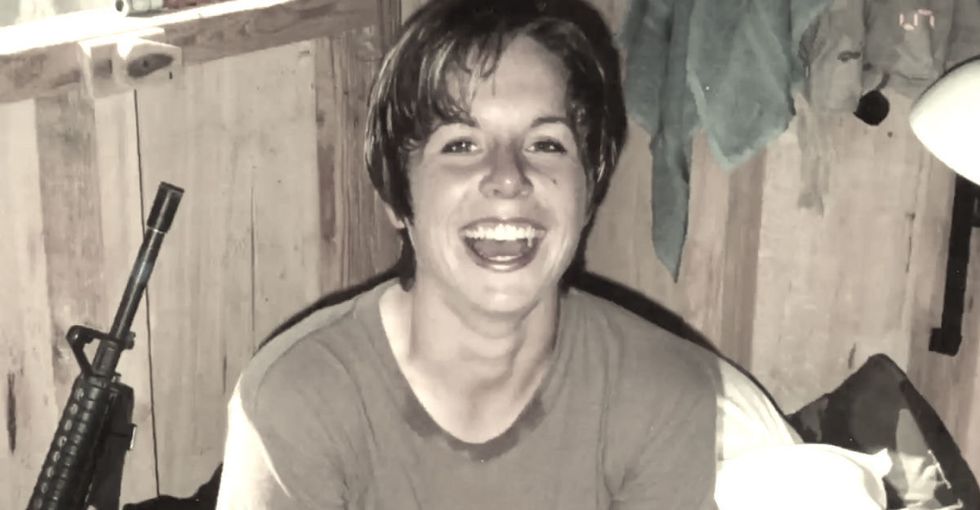 The film tells the story of three of the over 280,000 women who were deployed to the Middle East since 2001.

Sonia Kendrick was serving in the Army for several years before she was deployed to Afghanistan. So was Anna Mann, who served in Kuwait and Baghdad. Althea Raiford, a 20-year Navy veteran, also served in Kuwait.

When they returned home, all three were diagnosed with post traumatic stress disorder (PTSD).

Sonia in the Army

"If you went through that experience and you got to feel the fear everyday — the uncertainty, those things alter your life."

When Sonia came home, she says, "my bubble was popped" and that she just didn't feel safe anymore.

"I don't even know when it happened or how it happened," Althea explains. "I just know that one day I woke up and can't go into a store by myself."

For Anna it's more like "a little bit of stress over something really stupid and little, [it] becomes this huge stress. ... I really didn't think that I was good at anything."

Despite not having met each other while in combat, all three women found the same way to cope with their PTSD.

Althea spends her time at Gilliard Farms, a property that's been in her family for over 100 years.

"All of the things that I've seen in the world over the years that I've served in the military, those unseen scars that people don't know about, when I come here, I feel them healing." — Althea

For Sonia, farming is about having a mission.

"The food that I grow is going to food banks and food pantries. It's going to homeless shelters. ... I can't fight in wars anymore, but I can fight hunger." — Sonia

As filmmakers Owen and Christine told me via e-mail, by growing crops, Sonia continues "to serve her country by providing food for the hungry."

And in North Carolina, farming helped Anna her find her purpose.

"Being my own boss has let me give myself space where I'm not judging myself. ... It's built a lot of confidence back. I'm good at this. I own my own business. I am a mom." — Anna

Since the film was shot a few years ago...

Sonia, who "was only farming at one church" will be growing food at 23 different sites around Cedar Rapids, Iowa for food banks.

Anna is getting her master's degree at the University of California Berkeley, focusing on developing sustainable agriculture. She also became a board member of Acta Non Verba Youth Urban Farm in Oakland, California, which was founded by another amazing female veteran.

And Althea retired from the Navy and is rebuilding Gilliard Farms with her brother, enjoying their lives as sixth-generation farmers in Georgia.

Christine and Owen were super grateful that Anna, Sonia, and Althea all agreed to be filmed. They initially had trouble finding female vets that wanted to share their stories but were determined to show women's lives post-combat.

"(Female vets) are an often overlooked and underserved segment of the population. We also like to make solutions style films in relation to our broken agricultural system. America needs more farmers and veterans need jobs." — Christine Anthony and Owen Masterson

What a fearless bunch of ladies! I'm so glad they decided to share their struggles and triumphs. Check out their stories here: