These tigers have never been swimming before. Here's how they reacted to their brand new pool.

They're learning how to be tigers again. 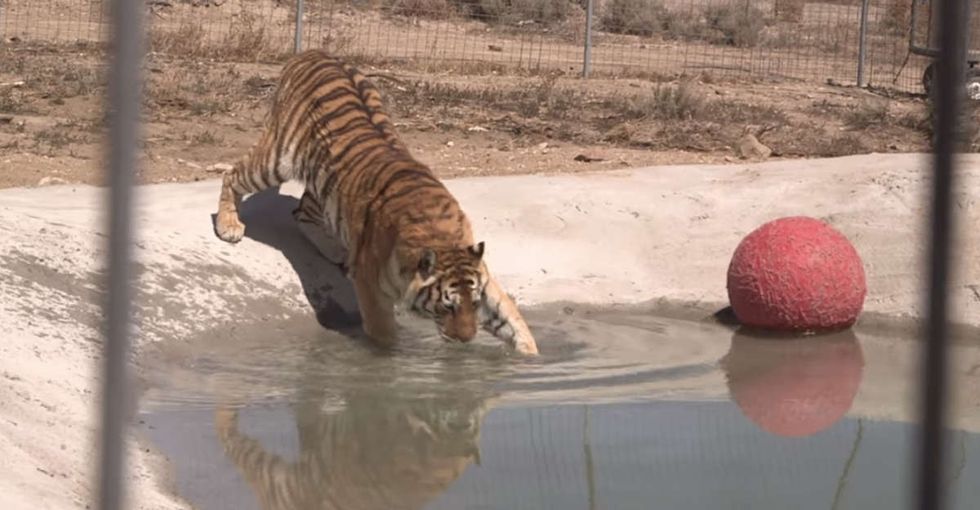 Siberian tigers Carli and Lily were living in a small, filthy cage when they were rescued by animal welfare officers.

The International Fund for Animal Welfare explains they were taken to Safe Haven Rescue Zoo in Nevada, where sanctuary workers immediately began the long, difficult process of teaching them how to be tigers again after a lifetime of captivity and neglect.

When the sanctuary employees realized Carli and Lily had never been swimming before, they built the tigers their own special pool.

It was love at first sight.

Even by conservative estimates, somewhere between 10,000 to 20,000 big cats are currently being kept as pets in the United States. For a sense of how many that is, imagine the average attendance at a New York Knicks game, except Madison Square Garden is filled with lions, tigers, and pumas instead of extremely disappointed fans.

Odd, but more exciting than the Knicks!

In case it wasn't obvious, keeping large, wild predators as pets is a pretty terrible idea.

It's not good for the animals, who are often forced to live their entire lives in small enclosures once their owners realize they can't be tamed. This can lead to major health and psychological problems.

It's definitely not good for the human either. In the last 25 years, there have been over 300 big cat attacks in the U.S., many as a result of dangerous pet situations. It is easy for owners to become overwhelmed by the sheer effort and expense that caring for a wild animal requires, which can have disastrous consequences.

There are plenty of videos of big cats doing adorable things on the Internet. They're super easy to watch. Many of them are even short. And they're a completely ethical, no-guilt way to enjoy the cuteness of tigers.

Go forth and descend down the rabbit hole of ethical, virtual adorableness!