These students painted their parking spots, and the results are a win for arts education. 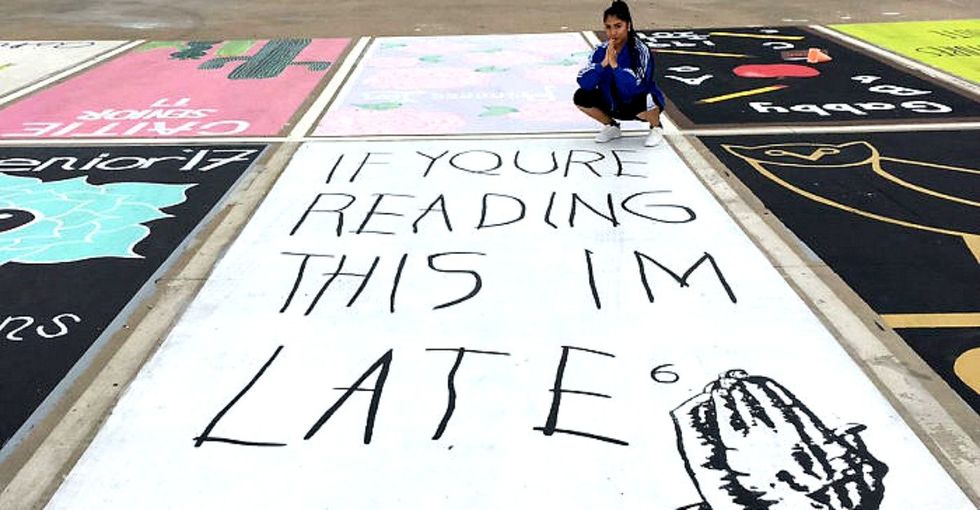 A few weeks ago, Martha Caldera tweeted a photo of her parking spot at West Orange High School that went insanely viral because, well ... just look at it.

‌The only thing that's going to motivate me to wake up for school tomorrow is pulling up in my parking spot 🙏🏽😎 pic.twitter.com/O88chiYyag— Martha Caldera (@ayeitsmarthaaa) August 21, 2016‌

Martha loves the rapper Drake and is also often late to school, so she decided to paint a clever take on his album titled "If You’re Reading This It's Too Late." Obviously, lots of people empathized with her message, with more than 24,000 Twitter users retweeting the photo.

"I'm happy my high school lets seniors do this, it's awesome!" Martha said.

Meanwhile, Mark Hamilton and his son decided to paint a spot dedicated to "Napoleon Dynamite" — a favorite movie of theirs.

"My son was elected Senior Class President. This was during his campaign. 'Vote for Pedro' came up often in discussion. It fit," wrote Mark.

Since the students and parents seem to love this creative outlet, West Orange High School has turned painting parking spots into a yearly tradition.

Here's a shot of all the spots from a drone that one student's father (who also happens to be a professional photographer) took in August:

‌Taken one day after all the art was completed. Photo by TK Photography.‌

His daughter Sarah's spot was inspired by her favorite Disney movie, "Tangled":

Most of the seniors who painted their spots drew inspiration from something personally meaningful to them. Whether it's a song, a movie, or a famous quote, they thought out of the box to bring each idea to painted fruition.

And West Orange isn't the only school doing this. Several high schools in Texas have also adopted the painting practice.

It's incredibly refreshing to see schools embracing artistic expression this way, especially considering how many art programs have been cut since the 2008 recession.

According to U.S. News & World Report, funding has been cut from more than 80% of schools in the United States in the last eight years, and the first things to go are almost always art programs.

This is a real shame because studies have shown that students who are exposed to art education are actually more proficient in reading, writing, and math.

Not only are art courses vital to students' development, they can be instrumental in building skills needed for those coveted, high-paying jobs.

Drew Faust, president of Harvard University, put it succinctly: "The ability to innovate—a skill that nine of out ten employers agree is the most important for new hires—requires thinking beyond immediate needs and making creative leaps. Where better to model this approach than in the arts and humanities?"

Even though it may seem like a simple project, allowing students to express themselves through painting their parking spaces sends an important message to the rest of the education community: Art has an impact on our present and our future.