These nuns built a lovely little chapel. Right in the way of a pipeline. On purpose. 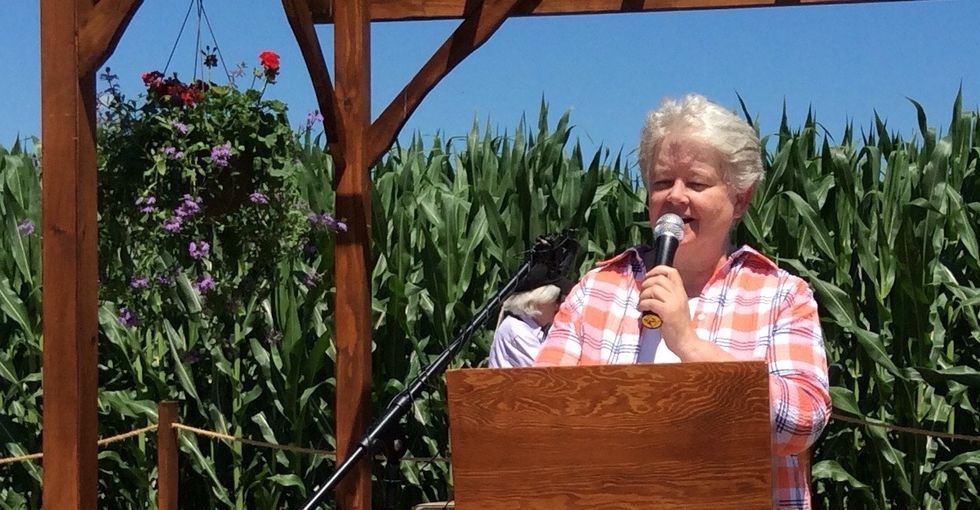 Over 300 people gathered in a cornfield chapel on Sunday, July 9.

Sister Janet McCann at the chapel's dedication. Photo from David Jones/Lancaster Against Pipelines, used with permission.

The chapel, a bare bones structure, rose out of a clear plot in Lancaster, Pennsylvania. There are no walls; its boundaries are marked by tall rows of growing corn. Any breeze that blew over the rows must have been welcome — the temperatures had been hovering around the 80s pretty much all week.

This was the scene as the Adorers of the Blood of Christ, a Catholic order of nuns, dedicated their new open-air chapel.

But this open-air chapel isn't just for prayers. It's a protest.

It's built directly in the path of an incoming natural gas pipeline.

The Atlantic Sunrise Pipeline will be an underground extension of the Transco pipeline and will cut across 183 miles of Pennsylvania — including directly through the nun's cornfield.

Sister Martha Wachtel, ASC. Photo courtesy of the Adorers of the Blood of Christ, used with permission.

A federal commission gave Williams Partners, the company building the pipeline, permission to use eminent domain to claim the land, pending a July 17 hearing.

In response, the nuns teamed up with a local grassroots group called Lancaster Against Pipelines to organize and construct the chapel in protest.

The result is that, if Williams Partners really wants the land, they're going to need to tear down the pews and arbor first.

The chapel. Photo courtesy of the Adorers of the Blood of Christ, used with permission.

The sisters say their protest is a religious one and the pipeline violates one of their ethics, which names the Earth as a sanctuary to be revered.

"It's not just about this pipeline," says Dwyer. "It's about drawing awareness to what fossil fuel usage has done to the poor, to communities, and to the planet."

"We see this as a moral, religious, and spiritual stand," Dwyer says.

This isn't the first time eminent domain has been used for pipelines.

The permission has been used on the Bakken and Dakota Access pipeline before. It might seem a little weird — most of the time you think of eminent domain (if you think about it at all) as something public, like a road or a bridge. A privately owned pipeline using it feels weird.

And those who feel this way are not alone. Backlash has led to proposed laws and litigation in multiple states.

Proponents of the pipeline hold that, once completed, it’ll help fuel more than 7 million homes and it will create jobs.

It's not clear whether the nuns' efforts will have an effect, but you've got to hand it to them — it's an audacious move.

In building their new chapel, these nuns have made their message crystal clear: If the pipeline really does want this land, they're going to have to fight for it.