The story behind 7 of history's most successful women of business.

Let's even the playing field a bit and celebrate the ladies of business. 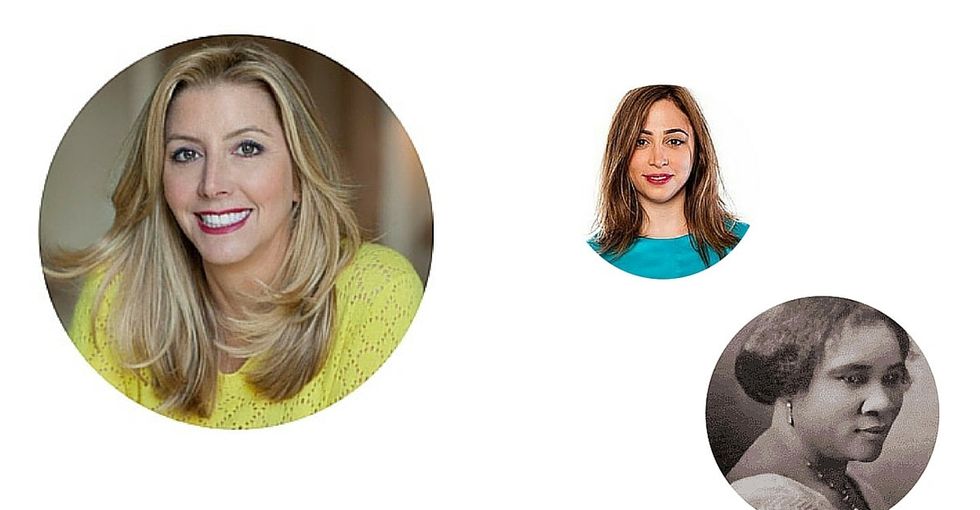 For a lot of history, business has been the sphere of the bros.

Much to-do has been made of the fact that many panels, business boards, advisory committees, venture capitalists, CEOs ... the list goes on ... are dudes.

And with good reason!

This is a board for a philanthropy organization in 1918. Two ladies! Frustratingly, at the top of many businesses, it's looking like even 2018's will still look a lot like 1918. Image via Center for Jewish History/Flickr.

Among 500 top-ranked companies in 2015, only about 14% of the highest leadership positions were held by women, and just 4% of the businesses' CEOs were female.

Because the odds are not so hot that you'll learn about a fantastic, inspirational lady boss today, we're gonna fix that!

Here's a sampling of some of our favorite female entrepreneurs and lady bosses.

While trying to get a little-bitty undergarment company called Spanx off the ground, Blakely was rejected a LOT. Good thing she persevered, both for the sanity of us ladies in formalwear and for her net worth: She is now a billionaire. Female-centric products might not always meet open financial arms at first, but that doesn't mean they're not "every celebrity on the red carpet wears them" viable.

Aside from just seeming really cool, von Fürstenburg's wrap dresses changed the clothing game. In a time when most ladies' clothing was burdened with zippers, buttons, seams, bows, and ruffles, von Fürstenburg created a jersey wrap dress. It might not seem like a huge deal, but think of the simplicity of the men's suit and how this wrap dress affords ladies the same level of workplace dress sophistication coupled with ease. It makes that wrap dress feel pretty dang liberating.

"What I think I sell with my clothes is confidence, so hopefully all my dresses, my accessories, are friends to the women. When you open the closet, and your eyes are swollen, and you don't like the way you look, you go to your friends." — von Fürstenburg to the Wall Street Journal

The first child after the Emancipation Proclamation to be born in her family — many of whom had begun their lives as slaves in pre-Civil War America — this woman rose to business heights at the helm of her hair-care line and manufacturing company, Madame C.J. Walker Manufacturing Company. She was unafraid to promote herself and even rebranded herself, changing her name from the delightfully American Sarah Breedlove to intriguingly French-sounding Madam C.J. Walker to give her hair-care products a more sophisticated vibe, thus making a more marketable brand. Her instincts were right; she was the first black and female self-made millionaire in America.

In 1935, Magie sold her patent for her game, The Landlord's Game, to Parker Brothers, and in 1939, the Monopoly board game was the result. Her role in this game's creation only recently surfaced. Ironically enough, Magie cared the most about economic fairness for women and for workers, and out of that passion she created — and patented — The Landlord's Game to teach people the perils of a monopolistic society.

Bdeir is the founder of LittleBits, modular electronics that snap together with magnets. Think: electronic Legos that move. She's also a major supporter of the open hardware movement, an initiative mainly focused on keeping technological knowledge open to everyone. Bdeir created a product that teaches tech and supports a movement that keeps knowledge flowin' (and LittleBits has more than 65,000 followers on Facebook, so it's clearly doing something right). Cool!

"We are hoping ... littleBits will make electronics sexy, and when you see how empowering it is, then you will want to learn more, as opposed to thinking it’s too hard and boring," she told the online magazine We Make Money Not Art.

Galan, a first-generation immigrant, always worked in TV, and for many years, she struggled to get by. She kept up her hustle, consulting for networks, managing a TV station, and starting her own production company. And her perseverance and patience (and no doubt, ingenuity) paid off. When she was appointed president of Telemundo, she became the first Latina president of a U.S. television network. She's now the founder of the Adelante Movement, an organization committed to empowering Latinas in every way imaginable. Talk about paying it forward!

Chase is a cofounder and former CEO of the ride-sharing company Zipcar. Through her wildly successful startup venture that disrupted transportation as we once knew it, she's helping create a world with fewer cars, less pollution, and a greater sense of shared responsibility.

"Zipcar believes that you really can do well by doing good. ... Most people who own cars do not really need a car full time, especially if they take public transportation to commute to work. Zipcar allows people to live car less without being car free." — Chase to FastCompany.

As you can see, many of these lady entrepreneurs and bosses have created products and businesses that aren't just successful (because that's a duh), they've created ecosystems of commerce that take advantage of their potential for impact.

Soon there will be a day when all businesspeople, both ladies and dudes, will not be singled out for their gender. And that will be an awesome day.

But until the playing field is a little more even, we'll be over here cheering for the smaller but mightier team of ladies in business.