The single most important quality that unites all 3 of Obama's Supreme Court picks. 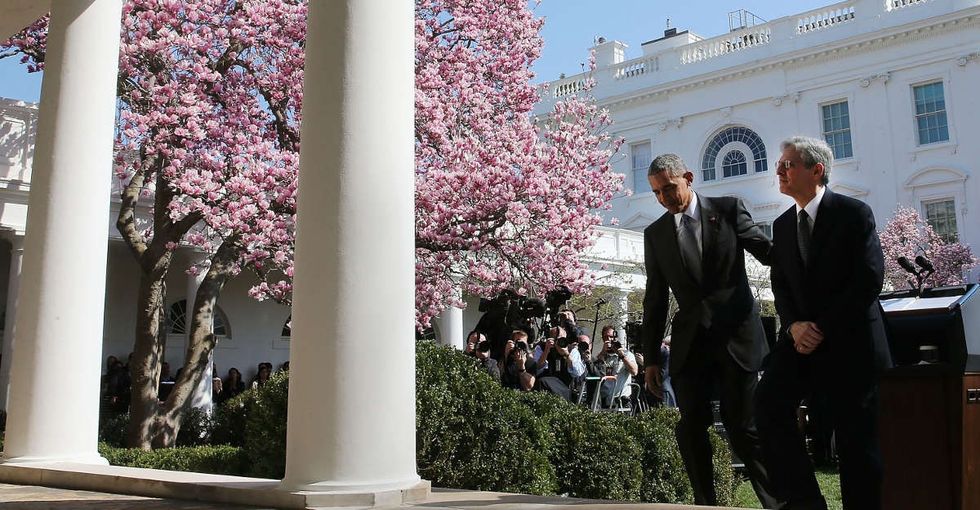 With Obama's third Supreme Court appointment, it's hard not to notice a fascinating pattern.

Amid the typical nods to Merrick Garland's impressive qualifications, judicial restraint, and humility, Obama used Garland's introduction to emphasize what he appears to believe is, perhaps, the judge's most important quality:

Garland's ability to put himself in someone else's shoes.

Here's the relevant section of what Obama said (emphasis mine):

"Chief Judge Garland is more than just a brilliant legal mind. He's someone who has a keen understanding that justice is about more than abstract legal theory. More than some footnote in a dusty casebook. His life experience, his experience in places like Oklahoma City, informs his view that the law is more than an intellectual exercise. He understands the way the law affects the daily reality of people's lives in a big, complicated democracy, and in rapidly changing times."

A careful reading of Obama's other Supreme Court introductions confirms that this sort of empathy isn't just a one-off thing with the president — it's a very big theme.

Here's how Obama introduced Justice Elena Kagan when he nominated her in 2010 (emphasis mine):

"But while Elena had a brilliant career in academia, her passion for the law is anything but academic. She has often referred to Supreme Court Justice Thurgood Marshall, for whom she clerked, as her hero. I understand that he reciprocated by calling her “Shorty.” (Laughter.) Nonetheless, she credits him with reminding her that, as she put it, “behind law there are stories -- stories of people’s lives as shaped by the law, stories of people’s lives as might be changed by the law…” That understanding of law, not as an intellectual exercise or words on a page, but as it affects the lives of ordinary people, has animated every step of Elena’s career -- including her service as Solicitor General today."

...and here's what he said about Justice Sonia Sotomayor during her introduction in 2009 (emphasis mine):

"For as Supreme Court Justice Oliver Wendell Holmes once said, the life of the law has not been logic, it has been experience; experience being tested by obstacles and barriers, by hardship and misfortune; experience insisting, persisting, and ultimately overcoming those barriers. It is experience that can give a person a common touch and a sense of compassion, an understanding of how the world works and how ordinary people live. And that is why it is a necessary ingredient in the kind of justice we need on the Supreme Court."

Like many of his predecessors, Obama clearly believes that a justice's primary role is to apply the law fairly, or as Chief Justice John Roberts put it during his 2005 confirmation hearings, "call balls and strikes."

"The person I appoint will be someone who recognizes the limits of the judiciary’s role, who understands that a judge’s job is to interpret the law, not make the law," Obama said in Garland's introduction.

But, in Obama's calculus, empathy matters just as much, if not more than that.

The president's focus on empathy is an implicit rebuke to the theory — long held by many in politics and the justice system — that the law is an all-seeing, dispassionate, neutral arbiter that doesn't play favorites.

A rally to protest the killing of Michael Brown in Ferguson, Missouri, 2014. Photo by Aaron P. Bernstein/Getty Images.

It's a tacit acknowledgement that, in practice, the law often works differently for poor people (something as simple as a traffic ticket can lead to a cascading cycle of debt and arrest if you don't have the resources to pay it)...

...for non-white people (check out these statistics on drug use and sale versus drug arrests for white people and black people)...

...for women (we're still arguing over whether a woman has a right to make a private medical decision about her own body — something men never have to worry about — in 2016)...

...and other demographics too.

More importantly, it's an affirmation of the fact that, while most Americans live lives that might seem worlds apart from the experience of the average Supreme Court Justice, their experiences should never be disregarded by or alienated from the law.

By highlighting this critical character trait in his nominations of Kagan, Sotomayor, and now Garland, Obama has made it clear that empathy is not just nice to have, but a necessary qualification for holding a seat on highest court in the land.