The pope just gave Trump this gift. It's a powerful wake-up call for the president. 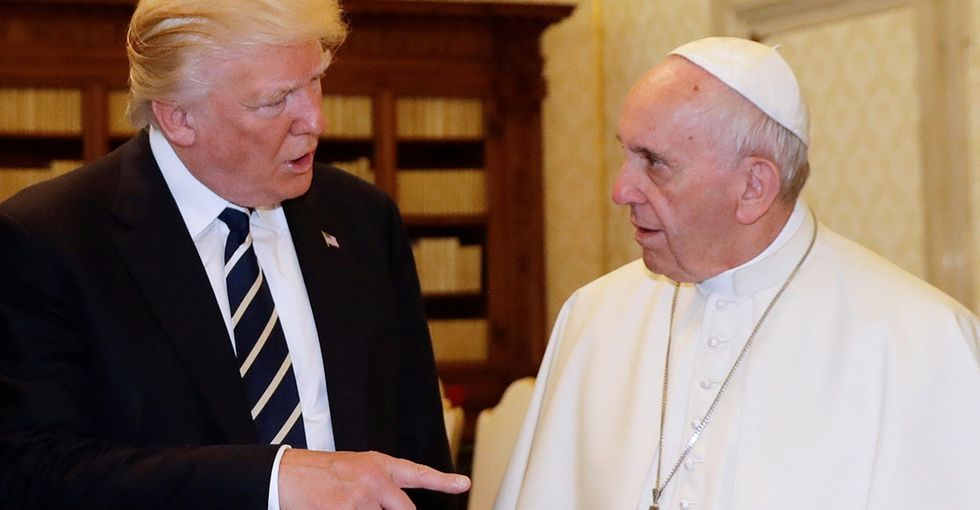 On May 24, 2017, President Trump met the pope. Trump called the meeting "a great honor," according to Reuters, and it seemed to go well, even though the two have sparred before.

During the meeting, the pope urged Trump to be a peacemaker.

On the way out the door, the two exchanged gifts, most of which seemed to fit the peace theme: a set of books by Martin Luther King Jr. for the pope, a medallion sculpted with an olive tree for Trump — as in literally a bunch of olive branches. (Maybe not the most subtle .... )

But there was another gift that stood out: a letter from the pope on climate change.

Back in 2015, Pope Francis wrote a letter to the world critiquing consumerism and the destruction of the environment, and calling for humanity to recognize and combat climate change.

With any other president, this might seem like a simple reminder. But considering that Trump has called climate change a hoax and proposed cuts to many environmental offices and regulations while in office, it comes across as a pointed bit of extra homework.

But since the meeting centered on peace, reminding Trump about climate change makes perfect sense.

Climate change doesn't just affect plants and animals. It affects people, too. Droughts, famines, and sea level rise make climate change an accelerant of instability, according to the Department of Defense.

In short, one of the best ways to promote peace is to take care of both the planet and each other.

The two messages — promoting peace and protecting the environment — are pretty well linked.

Trump reportedly promised to read the letter. Let's hope he does.

Keep Reading Show less
photography
Get stories worth sharing delivered to your inbox
By signing up you agree to Upworthy's privacy policy.
Trending Stories
animals
Videos