The Oscars just took a big step away from #OscarsSoWhite. Here's how big. 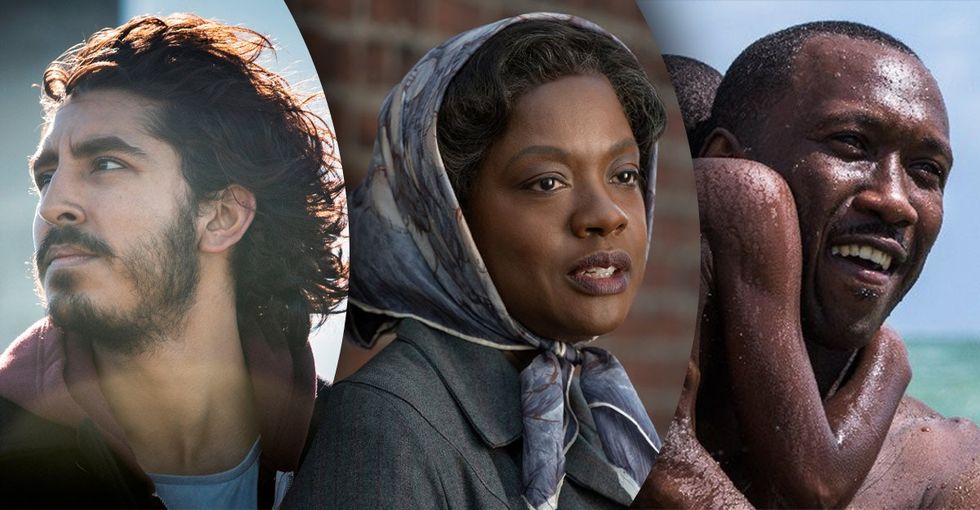 Once upon a time, white people took every single nomination in every single acting category at the 2015 Academy Awards.

That's 20 acting slots, for anyone counting.

Then, the following year, a funny thing happened.

Every slot, in every acting category: white person. Again.

Listen, I'm a white person who has no qualms with white people winning awards. But doesn't two straight years of exclusively white actors snagging nods seem a bit ... much?

Clearly, I wasn't the only one to think so.

In reaction to the Academy's preference for a specific type of actor, the hashtag #OscarsSoWhite — coined by April Reign, managing editor of BroadwayBlack.com — was born, calling attention to the obvious inequities reflected in the nominations.

So you can imagine why the internet was waiting with bated breath for the morning of Jan. 24, 2017 — the day this year's nominations were announced.

Fortunately, there were some major improvements to celebrate.

Of the 20 acting nominations, seven were given to people of color — the highest number in a decade.

The supporting categories are more diverse, particularly among the actresses, where three of the five slots went to women of color —  Viola Davis (“Fences”), Naomie Harris (“Moonlight”), and Octavia Spencer (“Hidden Figures”). Davis now has three Oscar nominations under her belt, making her the most nominated black actress of all time.

In the best supporting actor category, Mahershala Ali (“Moonlight”) could become the first Muslim ever to win in this category, while Dev Patel ("Lion") is just the third Indian actor ever to be nominated in any acting category.

Aside from acting, other categories aren't so lily-white this year either.

Four of the best picture nominees — "Hidden Figures," "Lion," "Fences," and "Moonlight," which tells the story of a young, black gay man — feature predominantly non-white casts, while four nominations in the documentary feature category — Ava DuVernay (“13th”), Ezra Edelman (“O.J.: Made in America”), Raoul Peck (“I Am Not Your Negro”), and Roger Ross Williams (“Life, Animated”) — went to black artists, The Wrap reported.

What's more, three black writers were nominated in the adapted screenplay category — Barry Jenkins' and Tarell McCraney's "Moonlight," and the late August Wilson's "Fences" — in a category where four of the five nominations went to films with mostly non-white casts.

Don't get me wrong — plenty of groups remain underrepresented, such as Latinx and Asian artists. As April Reign told the Los Angeles Times, the Oscar nods are much "blacker" — not necessarily a whole lot more diverse — than years past.

Still, this year's nominations do feel like a breath of fresh air.

"This year’s slate of Oscars nominees highlights that, when given the opportunity, films that reflect the diversity of this country will shine," Reign said in a statement, noting she's especially encouraged to see Bradford Young become the first black cinematographer to be nominated for "Arrival," and see films like "Fences," "Lion," "Hidden Figures," and "Moonlight" get the recognition they deserve.

The reason why the Oscars tend to be so white isn't a problem that can be fixed by one year of diverse nominees.

The demographics of the Academy — made up of thousands of industry bigwigs who vote for the winners — is older, very white, and predominantly male. And this shows in which films, and which artists, are nominated.

It certainly doesn't help that even getting the chance to become an Oscar contender is much more difficult for filmmakers and artists from marginalized groups. Hollywood's more hesitant to green-light projects it believes to be more financially risky*, so films and storylines featuring people of color — or LGBTQ characters or women or religious minorities (you get the picture) — get overlooked.

*Important note: Films featuring minorities can and do make money at the box office.

The Academy has a long road ahead in diversifying its membership and better reflecting the world we live in. But it's making progress.

In 2016, after another year of white actors filled every acting slot, the Academy announced major changes in how it will be selecting new voters and managing existing ones, aiming to double "the number of women and diverse members" by 2020.

President of the Academy of Motion Picture Arts and Sciences Cheryl Boone Isaacs, who has become a big proponent of diversifying the Oscars. Photo by Mike Windle/Getty Images for LACMA.

Although 2017 promises to be a more diverse Oscars than the previous two, one year doesn't make up for decades of underrepresentation, as Reign noted. It's important Hollywood recognizes that.

"Films that reflect the nuance and complexity of all theatergoers have been incredibly successful this year, both critically and financially," she said. "It is incumbent upon Hollywood to ensure that more stories like these are told."