The amazing reason mothers in India are giving their babies wearable medical records. 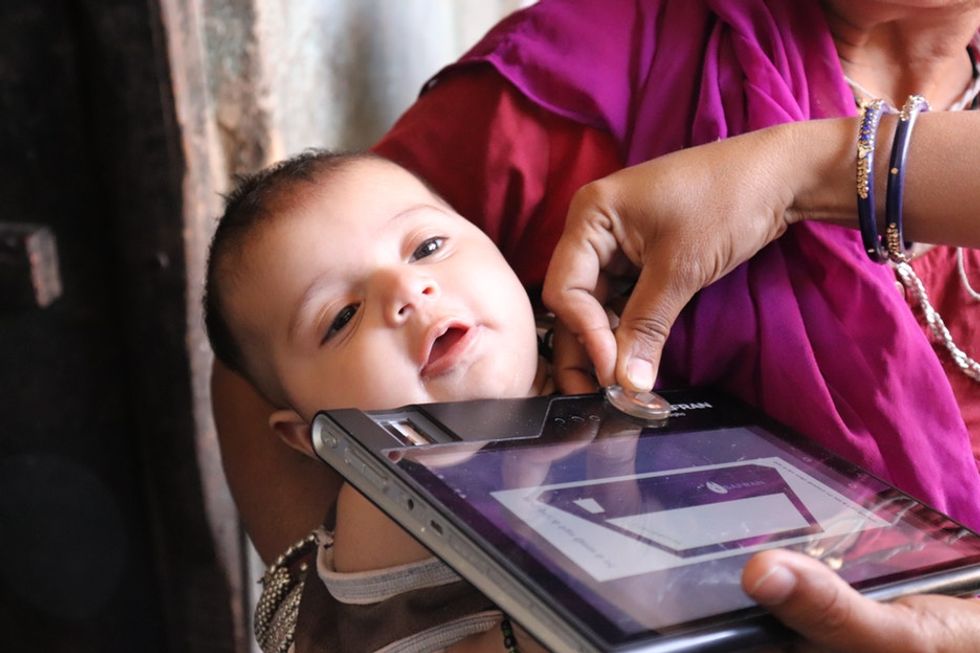 When Ruchit Nagar’s parents moved to Houston, Texas, in the late 1980s, they had no idea their son would grow up to save children’s lives in their home country of India.

Then again, it wasn't exactly a total surprise, though, as their son had been interested in global health from a young age. Nagar had loved biology in high school, so he volunteered in American hospitals to learn more about the healthcare system. Later, he went on global health mission trips to Honduras and Ecuador, where he spent time working in a research laboratory at a government-run hospital.

But it was while he was in college, studying at the Yale Center for Engineering Innovation and Design, that he learned a startling truth. 1.5 million children die from vaccine-preventable diseases every year and an estimated 9.5 million infants worldwide still don’t have routine immunization services. Despite how critical these vaccines are, this "vaccination gap" still exists.

Nagar quickly realized that it wasn't just an issue of access, either. Poor record keeping was making the problem much worse.

An agricultural community in Udaipur, India. Image via Wikimedia Commons/TeshTesh.

Maintaining immunization data in developing countries is a difficult task. Healthcare workers usually collect and store the information manually in paper log books, which means searching through all that data by hand. Couple that with how often families lose their medical documents and you can see what obstacles providers are up against.

That's why, after Nagar's professors asked the question: “What can you do to address the world’s vaccination gap?”, he and a group of other students came up with a business plan that could help address the vaccination gap, while helping healthcare workers too.

This led them to launch a nonprofit called Khushi Baby to help monitor the health care of mothers and children in India.

Khushi Baby (which translates to "Happy Baby" in Hindi) created a culturally-symbolic necklace that also happens to contain their full medical history. It's a digital, battery-free, waterproof data storage device. In other words, it allows people to literally wear their medical records.

In order to access those medical files, healthcare workers in rural villages just need to scan the necklace with the help of the smartphone Khushi Baby app.

So, in a way, this invention is like a child’s medical passport, as well as a visual reminder for mothers to get their babies vaccinated on time.

The team hopes that when mothers and their babies wear their Khushi Baby pendant in the village, it might also start a conversation among mothers who may not be attending health camps regularly. And since Khushi Baby services include voice call reminders in the local dialect, the team is also hopeful that more mothers will plan checkups and vaccinations ahead of time.

Hopefully, this easy-to-use technology will help bridge the healthcare gap that exists between developing nations and the rest of the world.

“I have a reason to get out of bed every morning because I truly believe that what we are doing has the potential to make a difference to improve maternal and child healthcare for those who may otherwise be forgotten,”  says Ruchit.

Digitizing vaccination data makes treating patients much easier, and, since the technology is relatively low-cost, it’s accessible even in low-income areas.

But Khushi Baby is about more than access to vaccines. It’s also about giving health workers the data they need to improve their treatment programs.

The technology empowers healthcare providers by allowing them to make better decisions faster. The app's checkup summary page helps them consolidate patient info from busy health camps, which then helps them make appropriate recommendations and offer the right kind of care.

“Many of our early interactions with mothers and frontline nurses in rural Udaipur [India] showed us that there was an opportunity to do things better,” says Nagar.

Monitoring data is crucial in helping countries prioritize and tailor vaccination strategies for each region. The app also comes in handy for medically-focused nonprofits because it helps them monitor the impact of their work, ensuring the success of their immunization programs.

Of course, for the Khushi Baby app to work, people have to actually use it. That’s why Nagar chose to make it a necklace.

He tapped into a cultural norm in India to get locals interested in wearing his smart device. The black thread around the necklace is traditionally worn across India to ward off buri nazar, or evil eye. It's said to bring good health and fortune.

‘’By observing that children were wearing jewelry in rural Udaipur, we realized that we could slot our technology into something that was already culturally-symbolic and accepted by the communities. In doing so, it made our wearable less likely to be lost or forgotten,’’ he explains.

So far, the Khushi Baby app is operating in over 350 villages and tracking the health of over 15,000 mothers and their babies.

And they’re not stopping there.

Khushi Baby aims to scale its impact to over 1000+ villages with a team of over 250 health workers. They hope to track the health of over 80,000 beneficiaries in the future.

"Closing the vaccination gap will require national and multinational resources and efforts," says Nagar. "Our goal is to track the health of the entire district of Udaipur by 2020 and lay down the blueprint for other districts across India (and elsewhere) to replicate and scale-up."

It’s no surprise Khushi Baby was named as one of the finalists of the GenH Challenge, which acknowledges and awards innovative solutions to worldwide health issues.

Khushi baby is on the verge of transforming lives for the better in areas that desperately need the help.

It all started with a simple but powerful idea — that everyone, no matter where they are in the world, deserves the chance to thrive. Thanks to innovators like Nagar, that possibility is closer than ever.

And with technology like this leading the way, we might someday live in a world where no mother or child is left behind.

This article was written as part of a mentorship program between Upworthy and Girls' Globe, a young-women-led global network and a communications and advocacy organization. Driven by the connected voices of women and girls worldwide, Girls' Globe provides a platform to educate and inspire people to take action on issues related to human rights, social justice, and gender equality through creative communications. Follow Girls' Globe on Twitter, Facebook, and Instagram.