The Air Force set this man up for a surprising career: as a food truck chef and comedian. 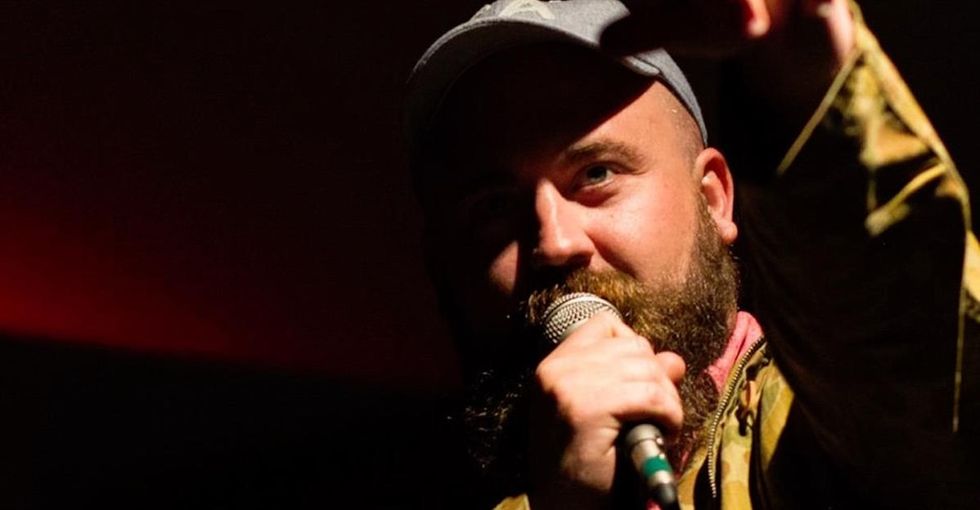 A comedian, a chef, and a nuclear engineer walk into a bar...

...but in this case, it's no joke. It's just Chuck Anderson, Air Force veteran-turned-comedian chef, heading into work at East Nashville hotspot Rosemary and Beauty Queen.

The 33-year-old is the entrepreneur owner of Death from a Bun, the food truck best known for bringing soft, doughy pork-filled Taiwanese bao buns to Nashville.

He’s also a sports podcaster, a stand-up comedian, and a dad to his sweet 4-year-old son named Cole.

So how did such an eclectic dude get his start? As a highly trained nuclear missile and space systems engineer, of course.

In 2001, Anderson was a senior in high school faced with a decision about what to do with his future after graduation.

"And then 9/11 happened," he says, and that sparked his decision to enlist at the end of the year. After graduation, he began basic training with the United States Air Force.

Anderson was sent to Louisiana to work on nuclear missile maintenance.

Over his four-year enlistment, the military sent him to Texas, California, and Guam, and by the time he got out, he’d learned everything he needed to embark on civilian life.

"I felt like I’d conquered the world after I finished my enlistment," Anderson says.

His military training set Anderson up for a steady career, but it also introduced him to something else — a passion for food.

When he joined the military, Anderson suddenly found himself introduced to a variety of different food cultures he’d never experienced before.

In Texas, he ate traditional Mexican food, and in California, he tried sushi from the coast.

But it wasn’t until he arrived in Guam that he found his passion. "When I was in Guam, it was the first time I had the soft dough — a soft Asian steamed dough bun, like a baozi," he says. "I fell in love."

But when he moved to Nashville, there were no dough buns to be found. That was a problem.

"I’d always had an idea to work for myself," he says. In a city without bao buns, he finally had the opportunity to be his own boss.

The idea for his food truck, Death from a Bun, was born, and with help from veteran entrepreneurship incubator Bunker Labs, it wasn't long before it became a reality.

"My first real job after high school, someone yelled at me the first day of work," Anderson remembers. "Basic training is built to instill stress, to make sure you can learn and handle things later."

When that stress came in the form of the obstacles to starting a business — everything from learning accounting to legal to plumbing — Anderson drew on his military experience to stay cool, calm, and collected under pressure.

His leadership style, centered on integrity, excellence, and service before self, also came from the military.

"Those are the core values of the Air Force," Anderson says. And those are the values that he seeks to instill in his employees. "I trust my guys a lot. They get a lot of freedom. So I’ve got to make sure that they’re working hard when nobody’s looking."

But above all, what the military gave Anderson was a comfort with feeling uncomfortable.

"That's growth, you know?" he says. "The best things that happened to me, I was stupid uncomfortable when I started them." That's how he got started as an entrepreneur and as a stand-up comedian — by finding something that felt uncomfortable and doing it.

"In the military, all the jobs that I thought I definitely was underqualified for, I ended up being good at," he continues. "That confidence comes from just jumping in and being uncomfortable and knowing you can get through it, and at the end, you're gonna be a different person. That's how you grow."

That's what gave him the confidence to take on the challenge of starting Death from a Bun — and what seems to drive so many veterans to start businesses too.

Within their community, support for one another combined with their lessons from the military is what helps veteran entrepreneurs succeed.

"You surround yourself with the kind of people who do that stuff, and you realize what's possible," Anderson says. "That's what's led me to where I am."

Correction 10/5/2017: Attribution has been revised to reflect the share image was taken by photographer Lance Conzett of Nashville.​