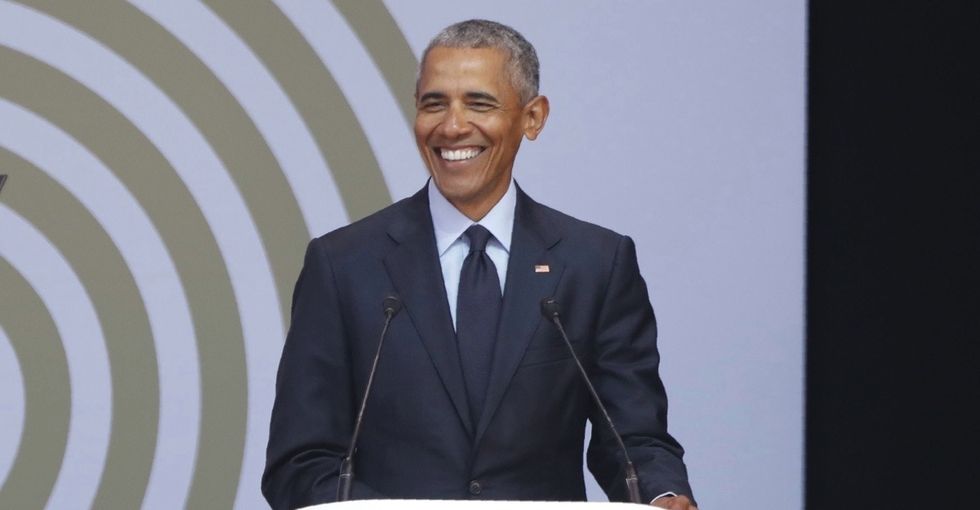 The speech — part of the 2018 Nelson Mandela Annual Lecture — centered on a theme of "creating conditions for bridging divides, working across ideological lines, and resisting oppression and inequality." Sounds like something we could all use, especially lately. Speaking for nearly an hour and a half, Obama avoided any direct critiques of Donald Trump and his policies. Indirectly, however ... that's a different story.

1. "Maybe it would be useful to step back for a moment and try to get some perspective."

With so much happening in the world, it's good to look to our past for advice. Very few of the problems facing us today are actually new. We've seen what toxic leaders look like, what their rise to power entails, and how they've fallen. We've seen what happens when pseudo-democracies use propaganda on their own people. We've seen how the world slips into war. Knowing that, we can learn how to fight back.

"But in the strange and uncertain times that we are in — and they are strange, and they are uncertain, with each day's news cycles bringing more head spinning and disturbing headlines — I thought maybe it would be useful to step back for a moment and try to get some perspective, so I hope you'll indulge me," Obama said during the speech's opening.

2. "You have to believe in facts. Without facts, there's no basis for cooperation."

This is an important point and one that probably doesn't get talked about nearly enough. If two (or more) groups with opposing goals want to work together, it's important they're at least able to agree on a common set of facts. During his speech, Obama used the example of climate change and opposition to the Paris Climate Agreement, calling on politicians to no longer "reject the very concept of objective truth."

"I can find common ground for those who oppose the Paris Accords," he said. "Because, for example, they might say, 'It's not going to work. We can't get everybody to cooperate.' They might say, 'It's more important for us to provide cheap energy for the poor, even if it means in the short term that there's more pollution.' At least I can have a debate with them about that, and I can show them why I think clean energy is the better path, especially for poor countries. That you can leap-frog old technologies. I can't find common ground if somebody says, 'Climate change is just not happening' when almost all the world's scientists tell us it is."

3. "We have to stop pretending that countries that hold an election where the winner somehow magically gets 90% of the vote ... is a democracy."

Democracy is a fragile thing, and we can't take it for granted. Too often, even now, countries host sham elections that make it all but impossible for the government's chosen candidates to lose. This is a democracy in name only, and it's time we stopped accepting this version of rule.

"Democracy depends on strong institutions. It's about minority rights and checks and balances and freedom of speech and freedom of expression and a free press and the right to protest and petition the government and an independent judiciary, and everybody having to follow the law."

4. "I am not being alarmist. I'm simply stating the facts."

There is a lot happening in the world that we should be worried about, and there will be people who try to make you feel like you're delusional for noticing it. The truth is that if we want to actually address the problem, we have to first acknowledge that it exists. Putting our heads in the sand won't save us.

"Look around — strongman politics are ascendant, suddenly, whereby elections and some pretense of democracy are (maintaining) the form of it, where those in powers seek to undermine every institution or norm that gives democracy meaning," he said, noting that the spread of these political actors is moving "at a pace that would have seemed unimaginable just a few years ago."

If there's hope of coming out of all this conflict unscathed, we absolutely have to reject cynicism in favor of hope. It's worked before, and it can work again.

"How should we respond? Should we see that wave of hope that we felt with [Mandela]'s release from prison? From the Berlin Wall coming down? Should we see that hope that we had as naive and misguided?"
"Let me tell you what I believe. I believe in Nelson Mandela's vision. I believe in a vision shared by Gandhi and King, and Abraham Lincoln. I believe in a vision of equality and justice and freedom and multiracial democracy built on a premise that all people are created equal and are endowed by our creator with certain inalienable rights. And I believe that a world governed by such principles is possible and that it can achieve more peace and more cooperation in pursuits of a common good. That's what I believe."

This is an easy and important lesson to remember. It's also pretty hopeful. There are a lot of hateful people in this world, but they weren't always like that, and they don't always have to be like that moving forward.

"[Mandela] reminds us that no one is born hating another person because of the color of his skin, or his background, or his religion. People must learn to hate. And if they can learn to hate, they can be taught to love. For love comes more naturally to the human heart — love comes more naturally to the human heart. Let's remember that truth. ... Let's be joyful in our struggle to make that truth manifest here on earth. So that 100 years from now future generations will look back and say, 'They kept the march going — that's why we live under new banners of freedom.'"

In uncertain times, it's easy to give in to apathy, to feel helpless. It's easy to shrug and tell yourself that you're just one person and ask what good one person can really do. Obama rejects this, especially now, quoting Mandela in defense of optimism.

Wear your values with products from PSA Supply Co., an independent site owned by our parent company, GOOD Worldwide Inc. GOOD makes money when you buy these products, and 10% of profits go to The Center for Community Change Action. Use discount code UPWORTHY to get 15% off your first order!
Culture