Something fascinating happened after these male baboons died. Men should keep this in mind.

The baboons show up halfway through. Just go with me here for a bit. 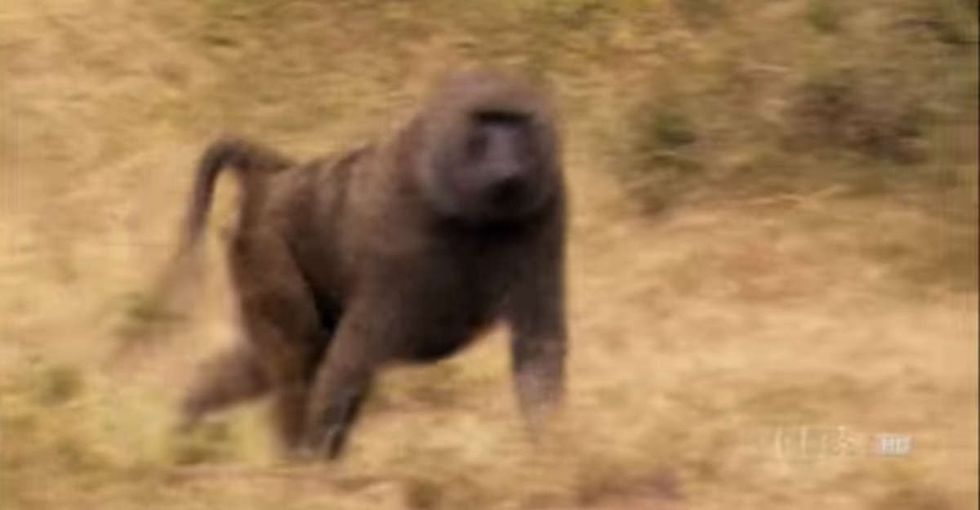 So yeah, we're pretty much the best. Cut and print.

And sure, men are responsible for a lot of really awful, terrible, messed-up things in the world.

Like war. And poison gas. And Bumfights. (Do not Google Bumfights, dear God).

But we can't help it.

After all, we're naturally aggressive and violent.

And kind of thickheaded. And dominant. And emotionless.

It's how we're wired. Biologically.

It all goes back to monkeys, you see?

Because we were monkeys once. And obviously, if you were a dude monkey, you had to be the biggest, baddest, most thickheaded, most dominant monkey. Because only the biggest, baddest, most thickheaded, most dominant monkeys got to mate with the lady monkeys and produce little monkey babies, who then went on to be big, bad boy monkeys themselves. And so on and so forth.

(Or maybe survival of the fittest? All those things are the same, right?)

Or so we've been told.

Baboons and humans share about 92% of our DNA. We're pretty close relatives. And, like humans, baboons are highly social animals. They travel in big packs called troops. And within each troop, there's a clear hierarchy. The biggest, most aggressive males are in charge.

And they're basically terrible jerks.

They hog all the resources. They pick on the smaller males. They mate with any female whenever, wherever they want. You know, just like you'd expect from a bunch of dude monkeys.

But here's the thing.

One day way back in the day, biologist Robert Sapolsky was studying a particular troop of baboons. And basically, they were just going along being their normal, gross selves. Until they were hit by a nasty strain of tuberculosis.

But weirdly, it only affected certain members of the population...

Specifically, the alpha males, who all died.

(Thus fulfilling the LiveJournal fantasies of every nerdy middle-school baboon.)

The females and the beta males? They survived.

And what's kind of amazing is what happened next. The relevant part starts at 44:30.

Basically, Sapolsky expected the troop to return to normal, with the remaining male baboons sliding into the roles of the alphas who had died.

But that didn't happen.

So they just decided, as a group, to chill the heck out...

...and spend a lot more time grooming and feeding one another rather than beating each other up, and just generally be more respectful of one another.

Each time a new baboon joined the troop and tried to be a violent, aggressive jerkweed, the existing members of the troop shut it down.

They developed a culture.

A culture that was different than 99% of all other baboon troops, and contrary to everything we thought we knew about them.

So where does that leave us men?

Well, we're told that we're programmed to be just like monkeys.

That it's burned into our DNA. That the only way to get to the top is to be violent, aggressive, and dominant.

(No, sir, you can't upgrade to business class with a bunch of expired Chuck E. Cheese's tickets.)

(Though chasing those giant pelican-y things sure seems like a good time).

And no, one case study doesn't "prove" that nurture is more important than nature or vice versa.

(That's not how science works, yo.)

But it does prove that we're not fated to behave any one certain way. We're not.

And it suggests that culture might be just as important, if not more important, than biology.

Which is great news.

Because culture, unlike biology, can change.