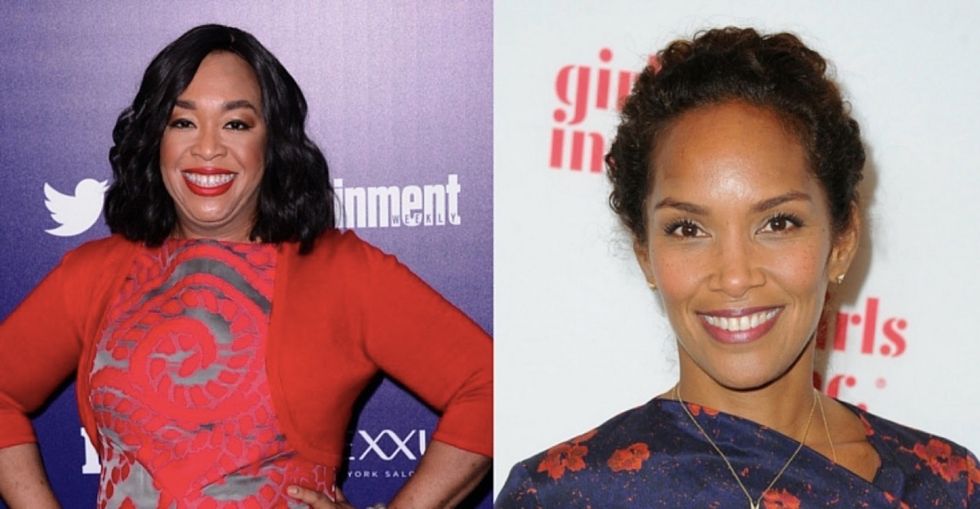 But with all of the well-deserved recognition, Rhimes — a true gal's gal — has always been careful to point out that she is not the only woman deserving of praise.

She may be the most talked about, but she isn't the only black woman showrunner serving up groundbreaking, not-to-be-missed, Twitter trend-worthy stories in prime time week after week.

And one of them has been pushing TV boundaries with her writing every Tuesday night.

Her name is Mara Brock Akil and her hit show "Being Mary Jane" has everyone talking.

"Being Mary Jane" has had a loyal and active Twitter following since its premiere, but last week's episode took the online engagement and next-day watercooler conversation to new heights with a jaw-droppingly raw episode that tackled the intersecting issues of mental health, abuse, race, and gender head-on — with some shocking plot twists too, of course. (And that's all I can say without spoiling it for you.)

The appeal of "Being Mary Jane" is similar to the rest of Akil's work — and is exactly why those Shonda Rhimes fans and Oliva Pope gladiators, who are just as excited by the idea of seeing diverse, well-rounded women on television as they are by white hats and wine, should take a chance on Akil (and Mary Jane) as well.

If you like Rhimes' catalog of shows, here's why you should check out Akil's "Being Mary Jane."

Not much to say here other than Olivia Pope isn't the only fierce, professional, beautiful, tough-but-also-still-vulnerable woman walking around in high heels being amazing. Mary Jane Paul (and all of Akil's female characters for that matter) carries the show with a grace, humor, and depth (thanks, in part, to the acting chops of best-friend-in-my-head Gabrielle Union).

2. It features characters who do not care about stereotypes.

Notice I didn't say "characters who aren't stereotypes." Akil understands that the best way to present life is to show it in all of its complexity. She doesn't write characters who are perfect or who go out of their way to avoid being perceived as "non-stereotypical."

Her characters are too busy being multidimensional, full human beings. Because stereotypes are flat by definition, creating nuanced characters means creating characters who can't ever be considered stereotypes, even when they occasionally act in ways that might fit a negative stereotype or two.

3. Akil and her writing staff excel at writing dialogue that isn't afraid to tell the truth.

Akil uses "Being Mary Jane" to touch on the hard stuff about life and womanhood — because she wants her audience to be comfortable letting the hard parts of our real lives show too. This "Mary Jane" monologue from a past episode after a main character committed suicide hits the nail on the head (emphasis mine):

"So yesterday I stopped for some coffee and the guy that works at the coffee shop said 'Good Morning, how are you?' and I said 'Oh I'm fine. How are you?' because that's what you say when you go to a coffee shop and somebody says 'Hey, how are you.' But I wasn't fine. I wasn't fine because today I'm burying my oldest friend. I realize that I'm a liar. I'm a big liar. And a good liar. We all are. We're all just pretending we're OK when we're really not.

And you know it's not even like it's enough for just us to lie… we really expect everyone else to lie too. It's like, we're all afraid that the whole world will come falling down if we're honest with each other all of the time. I used to ask her a thousand times… 'How are you?'… 'HOW ARE YOU?' But I don't know if I actually wanted to hear her truth. I don't think any of us did. And now she's gone.

I think the best way to celebrate her life is to stop being liars and actually embrace the truth. Just make sure that you tell everyone that you love that you will love them no matter how UGLY their truth is … you'll still love them."

The truth isn't always pretty. But it's real. And it makes for some darn good television.

4. "Being Mary Jane" works a hint of social commentary into every bite.

Akil's show doesn't need a Very Special Episode to naturally weave in the real topics that most of us discuss and think about in everyday life. Gender dynamics in the workplace (not just between men and women but also between women of different ages), mental health, immigration, sexuality, racism, political corruption, drug abuse, media consolidation — you name it, the show isn't afraid to tackle it head-on.

The insertion of real-world, sometimes controversial, issues goes a long way not to make just strong, progressive statements but also to make the audience think in new ways about issues that may not be as black-and-white as we once thought.

Let's be clear. The Rhimes empire didn't grow just because it's "important"; her shows are downright entertaining, and Akil's work is no different.

Sure, there may not be sex in the Oval Office in "Being Mary Jane," but there's still quite a bit of scandal (I couldn't resist). Stealing a boyfriend's sperm? Being blackmailed by an senior citizen lesbian con artist? A life-threatening car accident that occurs while overhearing a shocking betrayal via a butt-dialed cell phone? Oh yes.

There's more than enough emotional, sexy, and high-stakes drama to go around in the world of "Being Mary Jane." But unlike the larger-than-life storytelling style that Rhimes is known for (when was the last time your president was thought to be dead for three days but was actually alive and well?), the drama in Akil's characters' lives feels much more relatable. You know ... uh ... relatable for your friend who makes a lot of bad decisions, of course. Not for you. Never you. ;-P

6."Being Mary Jane" is making history, right alongside "Scandal" and "How to Get Away with Murder."

It's a part of a new wave of hour-long dramas that are not just led by a woman of color, but — in a distinction between Akil and Rhimes' shows — feature a predominately black and brown cast (in "Being Mary Jane," Mary Jane's executive producer is a driven and powerful Latina and is another standout character).

If I had my guess, judging from Akil's past track record, "Being Mary Jane" is probably on its way to breaking more records just like her former hit shows did: "Girlfriends," which ran from 2000-2008, was the women-of-color answer to "Sex and the City," and it made "Black-ish" star Tracee Ellis Ross a household name. It also was the longest running sitcom on network television in fall 2007. And Akil's 30-minute dramedy "The Game," which aired from 2006-2015, was the most-watched sitcom premiere in cable TV history.

As those of us in her longtime fan club know, Akil has been writing lush, compelling black female characters on television for over a decade and has never been shy about how seriously she takes that responsibility.

She compares the lack of fully realized, relatable images of women of color in the media to walking around your home (in this case, America) but not seeing any pictures of yourself hanging on the wall and, therefore, often feeling invisible.

Every time I turn around, I see another empowering quote from Rhimes that makes me want to stand up and cheer, but Akil's "Yaaaaasssss" moments deserve their own round of Facebook shares and applause emojis too.

If all of that isn't reason enough to get on the Mara Brock Akil bandwagon right away, try this: She's about to blow up even more.

This past August, Akil and her writing partner (and husband) Salim Akil inked a lucrative deal with Warner Brothers.

Soon (very soon), Akil's work will likely be seen by a much wider audience — an audience that could be just as large and diverse as the audience that currently dwells in Shondaland.

When that happens, many who will be introduced to Akil for the first time will likely want to call her "The Next Shonda Rhimes" or "Shonda Rhimes 2.0," but I have to ask: Please. Resist that urge.

She is and will always be the one and only Mara Brock Akil.

Be one of the cool kids and get to know her and her work before everyone else does. And start, tonight, with a glass of wine (or in my case, a pint of gelato) and the empowering, validating, sometimes naughty goodness that is "Being Mary Jane."