She 'went high' instead of going low after overhearing a table of homophobes. 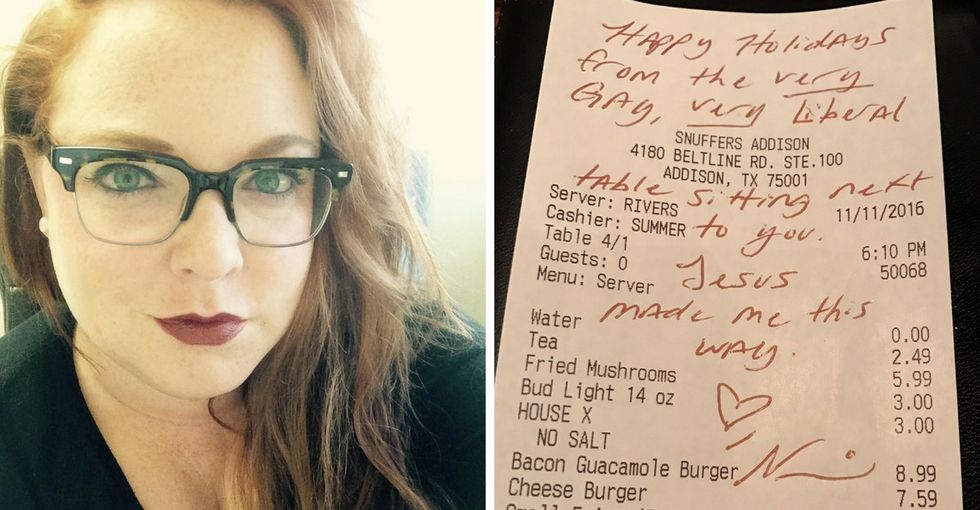 Natalie Woods was eating a restaurant in Addison, Texas, last week, when she overheard some really upsetting language coming from a table nearby.

A fellow diner mentioned how "disgusted" they were by the fact that their "liberal" nephew is gay. One of their family members chimed in, noting they'd need to pray for him to be "cured," The Huffington Post reported.

Their words hit close to home for Woods. She knows the pain of family rejection all too well.

"I was fuming with anger, but then became really sad," she explained in an email. "I know what [it's like] to have family members alienate you, or shame you. I felt for this kid, and have been in his shoes."

Instead of lashing out with anger — or not saying anything at all — Woods decided to go high, even as the other diners were going low.

Inspired by Michelle Obama's speech at the Democratic National Convention this past summer, Woods focused on turning the situation into a positive one.

How could she "act like the Jesus [she] grew up learning about," and respond in a way that might motivate this family to think twice about how they view their LGBTQ loved one?

She pulled out her wallet and asked the restaurant if she could cover the other table's tab. She left before seeing the family's reaction, but made sure to scribble a message on the receipt to make her point crystal clear:

Her note read: "Happy Holidays, from the very gay, very liberal table sitting next to you. Jesus made me this way. ... P.S. be accepting of your family."

"I'm a 60 year old straight, white guy," wrote one commenter. "And I totally support what you did. Thanks for making our world a little better."

"Your gesture brought me to tears," wrote another. "Thank you. You are such a beautiful person."

Woods almost didn't share the receipt online. But knowing how divided the country is after the election, she hoped one small gesture might have a bigger impact.

"I thought about not posting anything, but realized it was important for people after this election to see an act of love, rather than a complaint from the other side of a keyboard," she wrote.

"I don't think I did anything magnificent or over the top," she wrote. "I did what I think people should be doing all of the time for anyone. I mean that — anyone."

If you're feeling discouraged and helpless after the outcome of the election, Woods has a message for you: "Get involved."

"There are organizations, nonprofits, and ways to volunteer all over every community," she urges. "Small acts of love really matter, but sometimes love looks like protesting, running for local office, marching with minorities, and defending the people around you."