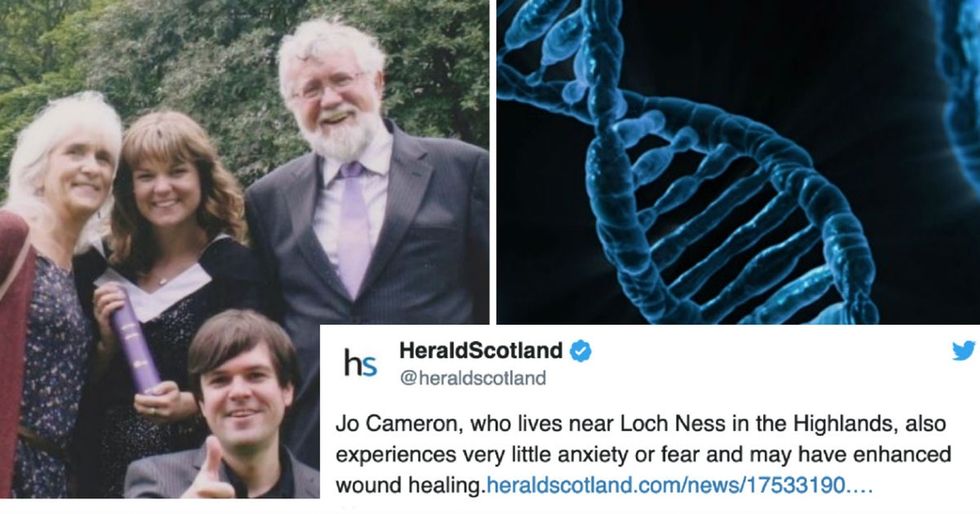 Jo Cameron has been pain-free all her life — something many might dub a superpower of sorts.

While other women struggle with the pain that comes along with childbirth, when Cameron gave birth to her two children, she felt only “a tickle.” Later on in life, she didn’t realize she needed to have her hip replaced until she physically couldn’t walk. She also couldn’t tell she had been burned until others smelled burning flesh, and failed to notice cuts until someone else pointed out blood. Spicy foods — such as Scotch bonnet chili peppers — didn’t set her mouth on fire and instead left her with a “pleasant glow.”

Her body also heals more quickly than most, with her injuries rarely resulting in scars.

While all this sounds pretty incredible, Cameron didn’t think much of it until around five years ago, after she underwent surgery on her hand. She told her doctor, Dr. Devjit Srivastava, that she wouldn’t need any pain medication during recovery. Obviously, this was an unusual patient request, but after delving into her medical history, he quickly realized she was a special case.

So he sent her to see a team of doctors and researchers focused on how genetics can be used to understand the biology of pain and touch at the University College London’s Molecular Nociception Group. Eventually they wrote a paper, which was published on Thursday in The British Journal of Anaesthesia, on the curious case of Cameron, whose pain-free existence seemed unexplainable.

Jo Cameron, who lives near Loch Ness in the Highlands, also experiences very little anxiety or fear and may have en… https://t.co/f5rvT6ZLec
— HeraldScotland (@HeraldScotland) 1553768760.0

Though these specialists had worked with several individuals who process pain differently, Cameron’s genetic profile was unique for an individual who couldn’t feel pain.

Eventually they discovered her uniqueness could be explained by the fact that she is missing the front of a gene they have dubbed FAAH-OUT — a gene all us have — but they claim she is the only individual they know about who has this specific genetic mutation.

“We’ve never come across a patient like this,” John Wood, the head of the Molecular Nociception Group at University College London, revealed to the New York Times.

According to researchers, this mutated gene does more than prevents Cameron from feeling pain. She also can’t feel fear or anxiety, which doctors think have something to do with the gene mutation making her more forgetful.

"It's called the happy gene or forgetful gene. I have been annoying people by being happy and forgetful all my life - I've got an excuse now," she told the BBC.

Jo Cameron believes she inherited the mutation from her late father, who she remembers suffered from little pain as well.

“I can’t remember him needing any painkillers,” she told the New York Times. “I think that’s why I didn’t find it odd.” Since he is no longer living, there is no way to know if he was a carrier. While her daughter and mother do not have the mutation, according to her doctors, her son “has the same microdeletion in FAAH-OUT, but does not have the other mutation that confers reduced FAAH function.” So he’s insensitive to some pain, but not all.

Could Cameron’s extraordinary gene help others manage their pain and anxiety better? Doctors are hopeful, but the road ahead is long.

Researchers hope that further studies will help them design gene therapy, pain intervention methods or anxiety medications, though expect it will take many years and a lot of money before a product will emerge.

“I’m reasonably confident that the lessons we are learning from the genes involved in pain will lead to the development of an entirely new class of pain medications,” Dr. Stephen G. Waxman, a Yale neurologist who was not involved with the paper but has studied the subject matter, told the New York Times.

Considering that painkillers on the market today — especially opioids like oxycodone (OxyContin®), hydrocodone (Vicodin®), codeine and morphine — are incredibly addictive and responsible for tens of thousands of drug overdoses every year, finding a responsible pain cure could save so many lives. And if there are more people like Cameron out there, the likelihood of this mutation resulting in a novel pain treatment system is even higher.

There are lots of unknowns, but scientists have come a long way in their research with genetics in recent years. It will be exciting to see the impact an unusual case like Cameron’s has on medicine in the years to come.

We can all be part of the giving movement

We all know that small acts of kindness can turn into something big, but does that apply to something as small as a pair of socks?

Yes, it turns out. More than you might think.

A fresh pair of socks is a simple comfort easily taken for granted for most, but for individuals experiencing homelessness—they are a rare commodity. Currently, more than 500,000 people in the U.S. are experiencing homelessness on any given night. Being unstably housed—whether that’s couch surfing, living on the streets, or somewhere in between—often means rarely taking your shoes off, walking for most if not all of the day, and having little access to laundry facilities. And since shelters are not able to provide pre-worn socks due to hygienic reasons, that very basic need is still not met, even if some help is provided. That’s why socks are the #1 most requested clothing item in shelters.

Socks are a simple comfort not everyone has access to

When the founders of Bombas, Dave Heath and Randy Goldberg, discovered this problem, they decided to be part of the solution. Using a One Purchased = One Donated business model, Bombas helps provide not only durable, high-quality socks, but also t-shirts and underwear (the top three most requested clothing items in shelters) to those in need nationwide. These meticulously designed donation products include added features intended to offer comfort, quality, and dignity to those experiencing homelessness.

Over the years, Bombas' mission has grown into an enormous movement, with more than 75 million items donated to date and a focus on providing support and visibility to the organizations and people that empower these donations. These are the incredible individuals who are doing the hard work to support those experiencing —or at risk of—homelessness in their communities every day.

Folks like Shirley Raines, creator of Beauty 2 The Streetz. Every Saturday, Raines and her team help those experiencing homelessness on Skid Row in Los Angeles “feel human” with free makeovers, haircuts, food, gift bags and (thanks to Bombas) fresh socks. 500 pairs, every week.

Raines is out there helping people feel their beautiful best

Or Director of Step Forward David Pinson in Cincinnati, Ohio, who offers Bombas donations to those trying to recover from addiction. Launched in 2009, the Step Forward program encourages participation in community walking/running events in order to build confidence and discipline—two major keys to successful rehabilitation. For each marathon, runners are outfitted with special shirts, shoes—and yes, socks—to help make their goals more achievable.

Help even reaches the Front Street Clinic of Juneau, Alaska, where Casey Ploof, APRN, and David Norris, RN give out free healthcare to those experiencing homelessness. Because it rains nearly 200 days a year there, it can be very common for people to get trench foot—a very serious condition that, when left untreated, can require amputation. Casey and Dave can help treat trench foot, but without fresh, clean socks, the condition returns. Luckily, their supply is abundant thanks to Bombas. As Casey shared, “people will walk across town and then walk from the valley just to come here to get more socks.”

The Bombas Impact Report provides details on Bombas’s mission and is full of similar inspiring stories that show how the biggest acts of kindness can come from even the smallest packages. Since its inception in 2013, the company has built a network of over 3,500 Giving Partners in all 50 states, including shelters, nonprofits and community organizations dedicated to supporting our neighbors who are experiencing- or at risk- of homelessness.

Their success has proven that, yes, a simple pair of socks can be a helping hand, an important conversation starter and a link to humanity.

You can also be a part of the solution. Learn more and find the complete Bombas Impact Report by clicking here.

From Your Site Articles
Related Articles Around the Web
humanity
Education

A dad from Portland, Oregon, has taken to LinkedIn to write an emotional plea to parents after he learned that his son had died during a conference call at work. J.R. Storment, of Portland, Oregon, encouraged parents to spend less time at work and more time with their kids after his son's death.

It's just a 2-minute video of someone mending a hole in a sweater, but people can't look away