She never heard people bad-mouth Appalachia until she left. Now she's making a film in response.

Sometimes telling a simple story is a revolutionary act. 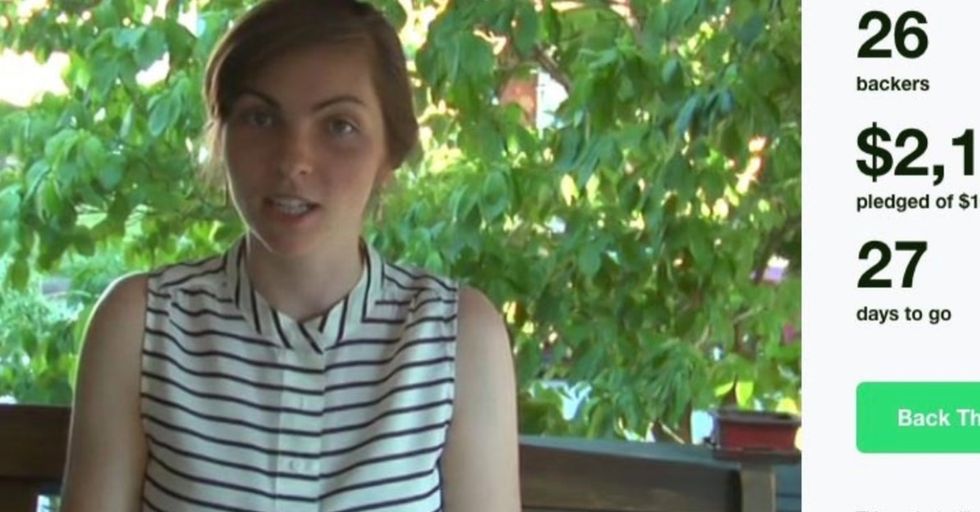 "Where ya from?" is a question Tijah Bumgarner got a lot after she left her home state.

"West Virginia," she'd reply, when she was waiting tables in Los Angeles and folks noticed her accent. And she knew the follow-up before it was asked. "They'd joke around like look down to see if I was wearing shoes and of course ask me if I'd married my cousin."

"They'd joke around like look down to see if I was wearing shoes and of course ask me if I'd married my cousin."

After a while, the 20-year-old started to respond with a prepackaged quip. When asked where she's from, she'd say, "West Virginia, but I have all my teeth and I'm wearing shoes, so don't bother asking about that."

It was an understandable defense mechanism — making fun of herself before anyone else could — but looking back, Tijah says she never "recognized what that really meant or that I was really just perpetuating this stereotype in a way."

Tijah moved to California in her 20s to attend film school. Image courtesy of Tijah Bumgarner.

Stereotypes of Appalachians as "helpless hillbillies" are pretty common — and they've been around for centuries.

What are the dominant stories that come out of West Virginia and other parts of central Appalachia these days?

On the one hand, you've got plenty of movies and shows about ignorant, backward, and "other" mountain people. Like the "Wrong Turn" series of six (yeah, SIX) movies about inbred, cannibalistic hillbillies in West Virginia.

Those types of stories can be traced back to the late 1800s, when travel writers from the North would come to the mountains to write what was essentially fiction about the isolated people there who were oh-so-against progress.

Poor, white sharecroppers in Appalachia, circa 1936. Image by Walker Evans.

This narrative took the fact that folks were living off the land and twisted it around against them — because surely anyone who doesn't want their land stripped away from them for resource extraction must be against progress, right? Right.

And then, of course, you've got news stories heavy with tragedy: chemical spills, poverty, drug use, mine disasters.

"Of course it's sorrowful. Of course we're losing a lot. Of course they're blowing up mountains. But there are other things happening too."

Appalachia is certainly known for its stories about coal mining. Photos by Mario Tama/Getty Images, altered.

"Of course [the stories of devastation] are important," Tijah stresses. "But they're not the only stories. Not everything has to be just about devastation, about sorrow for our land. Of course it's sorrowful. Of course we're losing a lot. Of course they're blowing up mountains. But there are other things happening too. So even that's pushing this narrative of helplessness in a way."

This summer, Tijah's working on a new kind of story: one that's simply about growing up.

Her story is a simple one, a relatable one, and maybe even a cute one, about a 14-year-old girl growing up in Tijah's hometown of Meadow Bridge, West Virginia.

"People can definitely relate to it. It's a universal coming of age story," says Tijah. "You have this awkward 14-year-old girl who's made fun of at school. So what I'm adding [to the narrative] is like, hey, kids that grow up here, we go through the same things as [everywhere else]. Sure, we may think we're a little different, but really, we all kind of go through these things. Y'know, we all have a crush, we all have a first kiss. I'm hoping that people can relate to that."

Tijah as a kid growing up in Meadow Bridge. Images courtesy of Tijah Bumgarner.

Tijah knows that there's no way "Meadow Bridge" could single-handedly reverse all the stereotypes people have about central Appalachia. No one story could do that.

But she hopes that adding to the discourse may help create something different. "At least," she hopes, "it's a drop in the bucket."

"Sometimes telling a simple story is a revolutionary act."