People were struck by a photo of this single dad. So they found him and gave him $191,000.

My faith in humanity is officially restored. 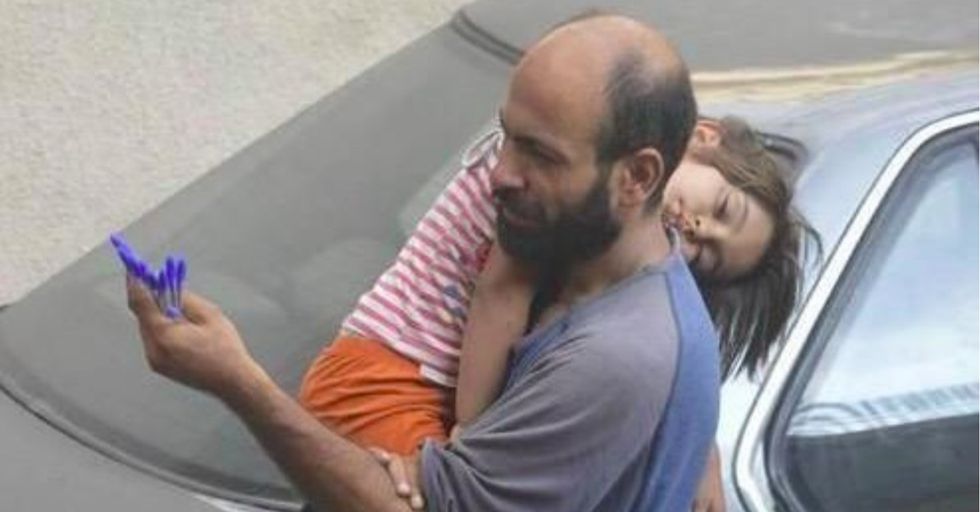 Meet Abdul Haleem al-Kader. He's been supporting this family by selling pens for the past three years.

Can't argue with that. Images via Al Jazeera English/Facebook.

Now, thanks to the kindness of strangers (and a single tweet), his life of selling pens on the streets of Lebanon may be over.

When Gissur Simonarson tweeted a photo of him selling pens in Beirut as he carried his sleeping 9-year-old daughter, it spread like wildfire.

Touched by the father's dedication, an online hunt to find al-Kader began. Conflict News took to Twitter using #GetPens and @Get_Pens to find him.

Thanks to the power of the Internet, they were able to find him and share even more of his story with the world.

Abdul Haleem al-Kader is a Syrian refugee and single father. Unable to find employment, he began selling pens to provide food for his children.

He left his war-torn country to create a new life for his family in Lebanon. Then, after some time in Beirut, his wife left him with their two children — ages 5 and 9 — after he refused to go back to Syria.

Moved by the story of the hardworking, single father refugee, Simonarson created an Indiegogo campaign to raise money for al-Kader and his family.

An empathetic public helped reach the initial goal of $5,000 in 30 minutes. When the fundraiser ended, over $191,000 had been raised. To put this in perspective: He made about $35 on a good day from selling pens.

Simonarson is teaming up with UNICEF to get the money to al-Kader and his family, as well as make sure they remain safe amid all the media attention.

The success of the #BuyPens campaign shows just how relatable his determination and love for his children are.

The campaign's success serves as a reminder of our common humanity. While most of us have not had to leave our home due to civil war, many of us know (or are) people working hard for a better life. His resiliency and dedication struck a chord with people around the world because the desire to do anything possible to help our loved ones is truly universal.

To make this story even sweeter, al-Kader wants to pay the kindness forward to help other Syrian refugees.

In an interview with Al Jazeera, he said: "I hope this campaign grows to help all Syrians. I hope other Syrians get a campaign the way I got a campaign, and people can see the conditions they are in."

If you want to contribute to the campaign, visit the Indiegogo page here.