One state just made farmers markets more affordable. It's good for everyone, even farmers. 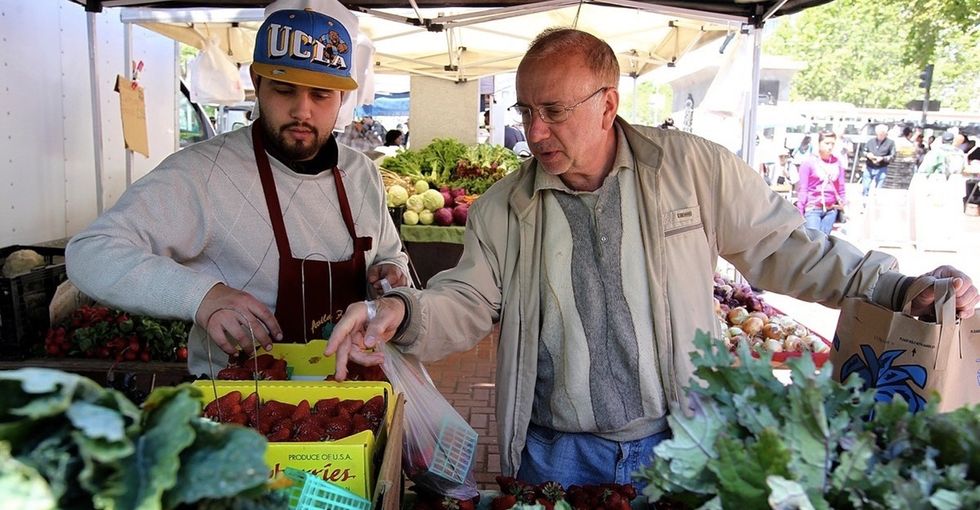 With the stroke of a pen, California Gov. Jerry Brown funded a $5 million program that supports local farmers and families in need.

It's the kind of good news we don't hear enough about.

In this new program, the California Nutrition Incentives Act will offer discounts on fresh fruits and vegetables at farmers markets for low-income shoppers receiving federal benefits.

A customer shops for fresh vegetables at a farmers market in San Francisco, California. Photo by Justin Sullivan/Getty Images.

A similar California-based program called Market Match, which has already rolled out, matches government benefits dollar for dollar to use on fresh produce and may serve as a model for the new California program.

Basically, if a shopper wants to use $5 of their federal benefits, this new program provides $10 in tokens for the shopper to use at local farmers markets.

While the bill was approved by the state legislature last October, it was unclear where the money for the program would come from.

In 2015, the U.S. Department of Agriculture announced that $100 million in Food Insecurity Nutrition Incentive grants would be used to fund projects aimed at getting nutrient-rich, affordable foods to people in need.

Quickly, states and nonprofits developed coordinated efforts to apply for the funds. Washington and Massachusetts have already received $6 million and $4 million respectively for their programs. And Market Match received $3.7 million over two years to expand their program, too.

Naturally, California (which has around 700 farmers markets and more than 3.6 million residents in the CalFresh benefits program) wanted in.

And by funding this new $5 million project, California will receive a $5 million match from the USDA, doubling the program's potential impact.

Local growers and farmers get to connect with and serve more customers.

Low-income families using federal benefits can stretch that money a little farther and spend it on local food at an affordable price.

And every level of government gets the chance to work together for the people and take an active role providing better options for people with limited access to fresh options.

An organic farmer puts up a sign at the new farmers market in Hollywood. Photo by Sebastian Artz/Getty Images.

For everyone involved, this is the start of something good. Let's keep the good going.