One little change in how you talk to your kids can help them be more successful.

It's so simple, but a lot of people have no idea it's even a thing. 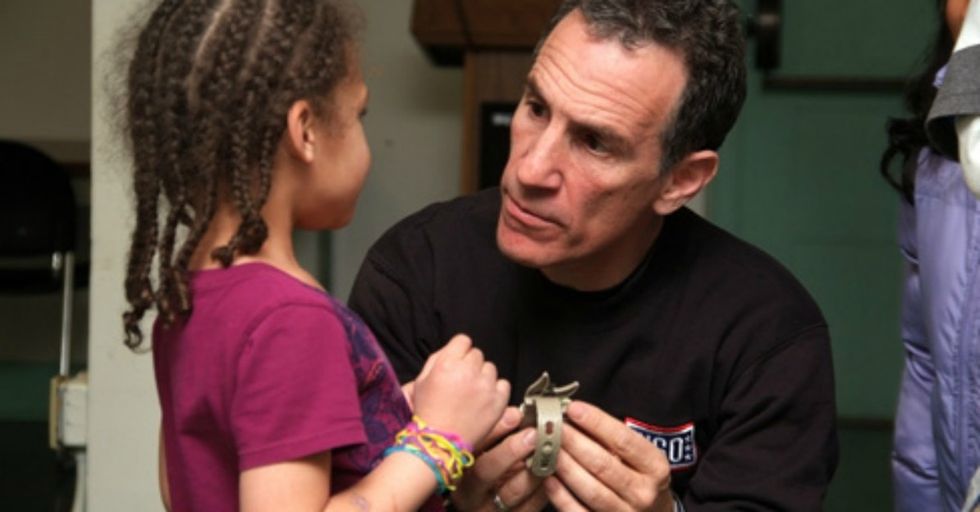 Why didn't anybody tell me this?

When expecting a child, a lot of parents tend to read anything they can get their hands on to figure out what to expect during pregnancy and the first few years of life. They tell you how to feed your baby, how often to take them to the doctor, and how to prevent choking tragedies and all kinds of other hazards.

But very few people are spreading the word about one simple thing you can do to help your child be successful.

Dr. Carol Dweck, a researcher who is pioneering a shift in how we view motivation in humans, is one of the few evangelizing about how to instill a growth mindset instead of a fixed mindset. Her talk on this was recently turned into an RSA Animate video. Another public figure trying to spread the word is Sal Khan from Khan Academy.

The quickest way to explain what it means to instill a growth mindset is: Praise your child explicitly for how capable they are of learning rather than telling them how smart they are.

For instance, here are how some conversations would play out to instill one type of mindset over the other:

FIXED MINDSET: "You read that sentence in the book — you are so smart!"

GROWTH MINDSET: "You read that sentence in the book — you worked so hard to learn how to do that and now you can! Congratulations!"

FIXED MINDSET: "You finished that puzzle so quickly — what a smart kid!"

GROWTH MINDSET: "I'm sorry I wasted your time with an easy puzzle — let me find another one that will give us a bigger challenge. I know we can do it!"

FIXED MINDSET: "You got an 80% on your test." (And then moving on to the next chapter immediately.)

GROWTH MINDSET: "You got an 80% on your test; that means you are well on your way to knowing this stuff! If you review the ones you missed and take the test again tomorrow, I bet you'll get closer to a 100%."

It's a subtle shift in messaging, but the difference it makes can be huge.

When you change your approach to praise, you're changing the achievement marker (reading a sentence or getting an 80% on a test) from a value judgment on the inherent intellect of the child to a series of messages throughout your child's life that instead places value on the process of learning.

It means a child's self-worth and confidence in trying things for the first time doesn't become tied to how well they can immediately perform or how inherently smart they are because they know they have more than one chance to prove themselves.

This isn't just a theory or some New-Age hippie-dippie parenting trend.

Through field research with a class of seventh graders, Dweck has begun proving that a growth mindset can make a significant difference. She and her team tracked a group of kids who entered their school year with almost identical test scores and noted which kids displayed growth mindset attitudes at the beginning and which ones held the beliefs of a fixed mindset.

Check out how the kids' grades fared over two years:

Why such a clear difference, though?

As Dweck explains in the RSA Animate video:

"We measured their mindsets — we saw whether they believed intelligence was fixed or could be developed. … They had entered seventh grade with just about identical achievement test scores. But by the end of the first term, their grades jumped apart and continued to diverge over the next two years. The only thing that differed were their mindsets. ...

They had completely different goals in school. The number one goal for kids in the fixed mindset is 'look smart at all times and at all costs.' So their whole lives are oriented toward avoiding tasks that might show a deficiency.

But in a growth mindset, where they believe intelligence can be developed, their cardinal rule is 'LEARN at all times and at all costs.'"


How early should you start instilling a growth mindset and is it ever too late?

If you think you can do it, you can. Photo by John Morgan/Flickr.

There are a couple of ways you can go about promoting a growth mindset, as Khan tells Upworthy:

A growth mindset can be instilled from the beginning.

"I think you can start from as soon as they can understand language. I think children naturally have a growth mindset. What I think happens very early, and maybe earlier than the school system is we project onto our kids where we say, 'Look she's so smart, she did that,' and that can be good positive reinforcement but it has a risk of the child getting addicted to that type of feedback so they don't want to take a risk where they might not get that feedback...or they don't want to shatter their parents' perception of them being smart."

And it can be practiced and introduced in later years, too.

"It gets a little harder but you can. Everyone has a growth mindset about some things and a fixed mindset about other things. I might have a growth mindset already about math or science or academics because I've experienced it multiple times and know that if I struggle, that the pain will pay off. But in basketball, as a kid, I probably had a pretty fixed mindset. I didn't touch a basketball until I was 11. [I thought] 'All the other kids are so much better, I'm never going to be [like them] ...' I had a fixed mindset but it was only in high school that I thought ... if I go out there and keep practicing and put myself out there and take myself out of my comfort zone ... and it pays off."

Whether you are a parent or plan on being one, are a teacher or a learner, or maybe even if you just struggle with impostor syndrome, this video may be the key to unlocking potential you've been feeling blocked from.

You can learn anything. Spread the news.