Once In A While, Somebody Comes Along And Captures Images That Change A Nation

Some of the most disturbing images that were captured in the early part of the 1900s were those of kids working in factories, coal mines, and other places where no kids belonged. The most famous photographer was Lewis Hine; his pictures brought these children into the spotlight in a way the nation could no longer ignore. 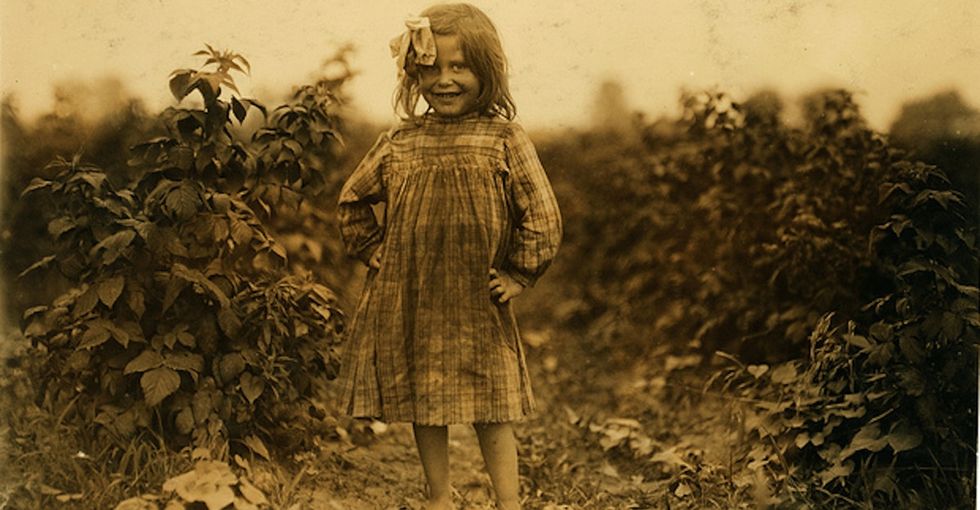 All throughout the 1800s, children worked in almost every country, sometimes in the worst possible conditions for the lowest pay. It was a problem in the United States certainly; as early as 1834, the National Trades Union in New York called for the ban of the practice. (1)

I’m just speculating, but I’m pretty sure I’m right that some of the same kinds of arguments we hear today about minimum wage were used back then:

Kids sometimes as young as 6 years old worked 11 or 12 hours a day, six days a week, for a dollar or two per week. There were frequent beatings. Accidents and deaths were extremely common, and kids were usually considered more expendable than adults. (2)

As awareness grew about this problem, more labor unions passed resolutions that were intended to influence the national conversation about this issue, including the American Federation of Labor, formed in 1881. As more people discovered some of the horrible conditions kids worked in, the issue ebbed and flowed in political, social, and community conversations.

According to the 1900 U.S. Census, there were almost 2 million children working in this country — about 1 in 6 kids. In 1904, the National Child Labor Committee was formed, and it aggressively fought for child labor law reform. It hired Lewis Hine in 1908 to photograph kids working in various industries; 10 years and thousands of photographs later, the mission was accomplished. It was perhaps one of the best uses of photography, a relatively new medium, to change minds and hearts. (3)

It took until 1938 for this to be put largely behind us, at least in the United Sates. This was achieved under the administration of president Franklin Delano Roosevelt, with support from the NCLC. This became the Fair Labor Standards Act, which is still the primary tool used to fight child labor in the United States. (4)

However, even with that in place, there were exceptions made in those laws that allow children to work in agriculture. This continues today.