Older, out, and infinitely proud: a look inside a lifesaving LGBTQ senior home. 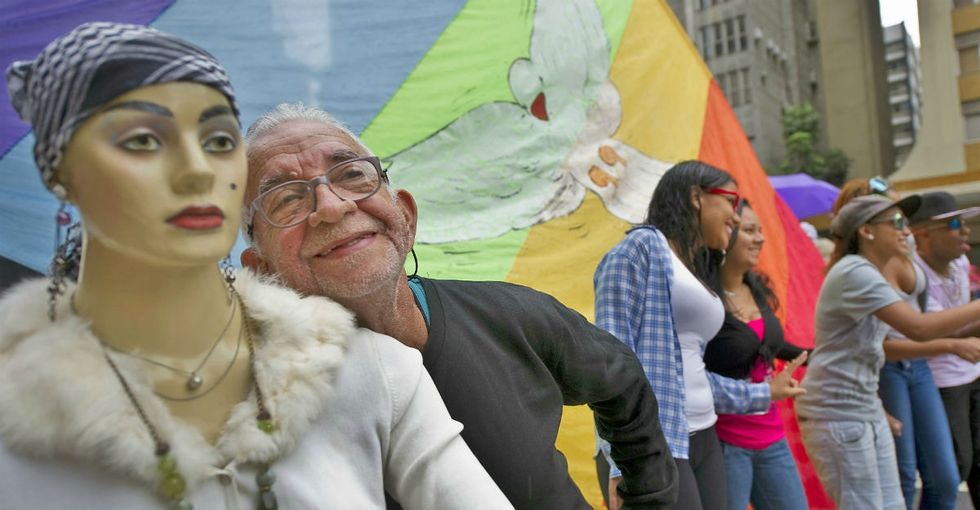 As a transgender woman, 65-year-old Eva Skye knows firsthand that living her truth means living in danger too. Three years ago, the only home she had was at a single room occupancy housing facility, or SRO, for those living in poverty. There, she often chose to trek up several flights of stairs to her fifth floor room instead of taking the elevator out of fear she'd be trapped and assaulted by other residents.

When I talk to Skye, her brightness fills the room with color. She's rocking a hot pink top, flashy blue fingernails, and a rainbow bracelet wrapped around her left wrist. "I’m a 65-year-old trans-queer punk mom," she explains in a gentle voice, brushing back hair dyed the color of rosé wine.

It's amazing what a difference a few years can make. Skye's quality of life has improved dramatically since 2014, when she moved out of the SRO and into Town Hall Apartments on Chicago's north side, one of the country's few LGBTQ-inclusive affordable housing centers for seniors.

But not every LGBTQ senior is that lucky.

Pushed back into the closet

In contrast to young Americans — a demographic coming out as LGBTQ earlier in life and in larger numbers — data and discouraging anecdotal evidence suggest LGBTQ seniors are retreating into the same closets they once escaped years prior to avoid discrimination today — whether it be at the hands of their peers, as in Skye's case, or at the hands of a senior care industry that carelessly erases them.

An alarming 2010 study discovered just 22% of LGBTQ seniors felt comfortable being "out" to health care workers. Many respondents had been harassed or refused basic services because they were LGBTQ; some, incredibly, reported being told that they were being "prayed over" or that they'd "go to hell" because of who they loved or how they identified. Instead of facing these abuses, many LGBTQ seniors said it was easier to simply blend in — even if it meant becoming invisible.

Elderly LGBTQ people are far more likely to live alone and far less likely to have adult children they can rely on as they age compared with their straight, cisgender peers. There's a greater chance they'll end up in nursing homes, where this type of discrimination can take place. Staff members at such care centers often don't even believe they have LGBTQ residents — not because that's actually the case but because residents often choose not to come out in such uncertain conditions.

A safe place to grow old

Walking through Town Hall's cafeteria during lunch, the nurturing, jubilant atmosphere feels worlds apart from the findings of that 2010 study.

The cafeteria in the Center on Addison. Photo by Robbie Couch/Upworthy.

Through the Chicago Housing Authority's Property Rental Assistance Program, Town Hall has been providing studio and one-bedroom apartments to low-income seniors — most of whom identify as lesbian, gay, bisexual, transgender, or queer — for over three years.

"Seniors, as they get older, tend to want to go back into the closet," confirms Todd Williams, senior services manager at the Center on Addison, which provides many programs to Town Hall residents. "They suffer from isolation, and they feel as though they can’t necessarily be themselves in their own communities."

Eugene Robbins, another Town Hall resident, understands that struggle well. Before moving in three years ago, he'd been living in a housing project a few miles away where being gay and black had its challenges to say the least.

As a proud man of color born in Selma, Alabama — where, he recalls, white supremacists threw bricks through his family's home windows — he avoids trudging through too much past heartache. But Robbins acknowledges the stains discrimination has left on his life: "As the old saying goes, when your back is against the wall, you'd be surprised at what you can do," he reflects on his time in the housing project.

At Town Hall, residents gush about their improved lives as if the apartments were their grandchildren's straight-A report cards. Skye says living in her top-floor studio apartment, with Lake Michigan just beyond view, makes her feel like Alice in Wonderland. Marti Smith, a 72-year-old "card-carrying lesbian," considers herself "extremely lucky" to have landed there and credits Town Hall and its programs with saving her life.

Smith survived throat cancer in the late 1990s. It wasn't just a health setback, it was a financial one too. The cancer's many lingering effects were considered pre-existing conditions and — long before Obamacare — deemed her uninsurable. Smith racked up credit card debt to pay for the necessary care.

The apartments' affordable rates, along with a bevy of center services that help residents manage external costs, are invaluable. Smith has used almost every program offered through the center, she says — free of charge, of course. Residents with ailments like Parkinson's disease and juvenile diabetes — even 30-year AIDS survivors — have benefited greatly from the Center on Addison, Smith notes. "There's no way that I could ever pay back what I have gotten," she says.

Books line the wall at the Center on Addison. Photo by Robbie Couch/Upworthy.

The building's refurbished hallways, where rainbow flags and smiling faces welcome you around most corners, makes Town Hall feel like a queer oasis, safe from the systemic challenges waiting outside. The Center on Addison, which operates on the building's first floor, offers innovative programs and experiences to residents, from those more focused on socializing and well-being — like yoga, trips to the theater, and genealogy classes — to less fun (but certainly just as critical) services — such as help managing health care benefits and job readiness workshops. Programs at the center are open to LGBTQ nonresidents who live in the Chicago area too.

Outside groups have toured Town Hall and the Center on Addison in hopes of replicating its success elsewhere, Williams says. Locally, the apartments have become astoundingly popular among seniors hoping for a coveted studio or one-bedroom: "We no longer have a waiting list," he notes. "The waiting list was so long, we actually couldn’t [continue it]."

That's the sobering punch that complements touring Town Hall: There's overwhelming demand for more places just like it and nowhere near enough facilities to accommodate. Queer seniors, with their unique needs, are more likely to live in poverty; in Chicago alone, roughly 10,000 LGBTQ seniors could potentially benefit from affordable, queer-inclusive housing. With its 80 apartment units, Town Hall simply isn't enough.

Fortunately, more doors are opening for people like Skye, helping queer seniors close the closet doors for good. Along with Town Hall, facilities in cities like Philadelphia, Minneapolis, and San Francisco are blazing trails for the often overlooked demographic within the LGBTQ community; New York City is in the midst of building its first two queer-inclusive centers as well — one in Brooklyn, one in the Bronx.

"Pandora’s box has been opened," Skye says of her new take on life after moving into Town Hall. "Look out world, here I am."

If only every LGBTQ senior could say the same.