Mike Huckabee joined a country music board. He lasted one day. 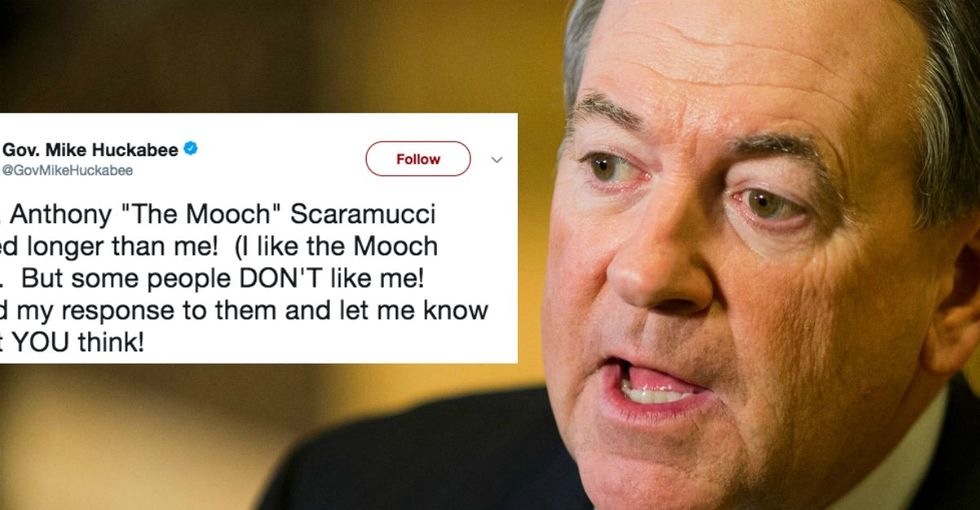 Ran for president (twice)? Vehemently opposes basic rights for LGBTQ people? Once compared his losing weight to being in a concentration camp? That's him!

Huckabee was named the newest board member for the Country Music Association Foundation on Feb. 28.

The guitar-playing conservative firebrand has supported music education and pushed back against President Donald Trump's threats to defund the National Endowment for the Arts, so the job title might make sense on paper.

The foundation — which focuses on promoting music education programs and generally stays out of politics — was quickly and sharply criticized for embracing the polarizing former governor from Arkansas.

"It was announced Wednesday that Mike Huckabee has been appointed/elected to the CMA Foundation Board. Yes, that Mike Huckabee," read a post on music industry website Hits Daily Double. "There’s great concern and protest over the appointment, and rightfully so. Many in Nashville are sharing feelings of embarrassment for our country and industry."

The most vocal critic may have been country music powerhouse Jason Owen, whose management company, Sandbox, oversees performers like Faith Hill and Little Big Town.

In an open letter to CMA executives published on Hits Daily Double, Owen, who is openly gay, slammed the "grossly offensive decision" to give Huckabee such an influential role at the foundation.

"It is with a heavy heart that I must let you know moving forward, Sandbox and Monument will no longer support the CMA Foundation in any way (this includes everyone we represent collectively), considering the heartbreaking news shared today regarding Mike Huckabee appointee/elected to the CMA Foundation," Owen wrote.

"As you may know, I have a child and two on the way. This man has made it clear that my family is not welcome in his America. And the CMA has opened their arms to him, making him feel welcome and relevant. Huckabee speaks of the sort of things that would suggest my family is morally beneath his and uses language that has a profoundly negative impact upon young people all across this country. Not to mention how harmful and damaging his deep involvement with the NRA is. What a shameful choice."

All in all, he lasted just about 24 hours in the role.

In a blog post shared on his website, Huckabee criticized the backlash: "The message here is 'hate wins,'" he wrote. "Bullies succeeded in making it untenable to have 'someone like me' involved."

In a tweet sharing the blog post, the former governor quipped that "Anthony 'The Mooch' Scaramucci lasted longer than me [as White House Communications Director]."

Many supporters are standing in Huckabee's corner. "Excellent article, governor," one Twitter user wrote in response to Huckabee's blog. "I stand with you."

"This is such a shame, Mike, but I'm not surprised," another chimed in. "Country music is now filled with liberals who only want those who align with their views to be heard."

Huckabee's ousting, however, shows why no one should peg country music — or its fans — into one (homophobic) hole.

The genre has built a reputation for attracting a more conservative fan base throughout the years. But any kind of music is best when the bigotry's kept on mute. And country is no exception.