Many folks with HIV stay silent about their status. The reaction to Charlie Sheen's story shows why.

Many people say the hardest part of living with HIV is the stigma. Here's some easy ways to treat HIV-positive people with compassion. 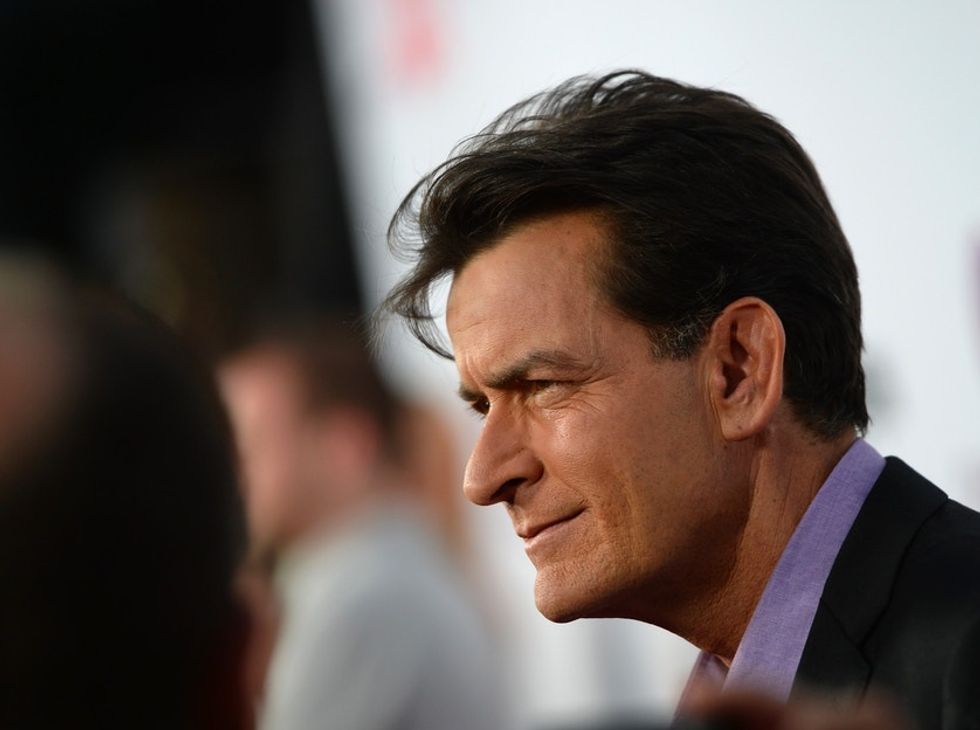 All totally valid criticisms of Sheen aside, no one deserves to have their personal information shared without their permission. Sheen probably wouldn't even have shared his status without the threat of extortion hanging over his head, because there is still so much stigma and so many misconceptions surrounding an HIV diagnosis. But now that he's come forward, it's significant that he was able to share his story in his words before anyone else could.

Individuals with HIV should be able to live without shame and with the freedom to be open about their lived experiences.

Reactions to Sheen's announcement show we still have a long way to go to overcome stigma about the virus.

Sheen shares that he was diagnosed about four years ago. Why did he keep it secret for so long? Uh, the cover of this magazine might give a hint.

Treating someone's HIV status — a private medical condition that is likely irrelevant to everyone who'll read it — as a sensationalist gossip topic isn't just gross, it's wrong. Not to mention: HIV and AIDS aren't interchangeable diseases — to proclaim, on the cover of a magazine no less, that Charlie Sheen not wanting to disclose his HIV diagnosis is an "AIDS COVER-UP" wildly misrepresents what an HIV diagnosis means in 2015. Media reactions like this are why he and millions of other Americans are hesitant to disclose their HIV status.

Misconceptions and stigma about HIV play a large factor in why many with the diagnosis stay silent, often forever.

“We're finding, despite the fact that we've been living with this disease for 30 years, that the greatest challenge we're facing is stigma," David Furnish, chairman of the Elton John AIDS Foundation, said in an interview with The Advocate. "[That's] the biggest hurdle we have to overcome."

Stigma against HIV-positive people is a large reason why discrimination is so rampant. Loss of housing, employment, and close relationships is common for people with HIV or AIDS in ways that many folks with other life-threatening conditions don't face.

Here's what you need to know about HIV:

Stigma is a tricky thing that many people don't realize influences how they treat someone — because it can seem so normal. Remembering these facts will help you destigmatize HIV and AIDS when you find yourself in conversations about it in the real world.

1. HIV and AIDS are not interchangeable.

HIV stands for human immunodeficiency virus, which is a tiny organism in the body.

AIDS (acquired immunodeficiency syndrome) refers to the condition one can get after HIV completely compromises their immune system.

An individual can have HIV for many years and never get AIDS. Only a doctor can make the call whether someone has AIDS. Thanks to progress in medical care, people in the U.S. who take antiviral treatments often never get AIDS.

2. The risks of contracting HIV through everyday contact like handholding or sharing a swimming pool is minimal.

HIV is not spread through the air, casual touch, tears, sweat, or saliva. So it's OK to use the same bathroom, eating utensils, and water fountain. In the U.S., the most common way people are infected is through penetrative sex, which is why it's important to use condoms.

But it's not just through sexual activity. There are reasons to be extra cautious if, say, you have a cut on your hand and you help your friend with HIV bandage a cut on her hand. HIV is transmitted through certain body fluids, like blood, coming into contact with the bloodstream, damaged tissue, or a mucous membrane like the mouth.

3. HIV is not a punishment.

No one deserves to get HIV. It is not a condemnation from God or some sort of punishment for certain acts that others may not approve of. When you read your magazines in the checkout aisle of the grocery store, don't buy into all the correlations between Charlie Sheen's history of being a "womanizer" or his relationships with sex workers meant to imply that his HIV infection is a punishment for that. It only takes one bad needle, one broken condom, or one partner to transmit the disease.

If you cite Sheen's wild past and say he got what he deserved, that assumption reflects on all people who have HIV, no matter how careful they were in their lives. It reinforces the myth that HIV-positive people are being punished for bad decisions, a stigma that they face every day.

4. People of all genders and sexual orientations can get HIV.

For a long time, HIV was seen as something only gay and bisexual men should worry about. But according to the CDC, 23% of people with HIV are women. Of women who were newly infected, 84% were from heterosexual contact.

While most folks get HIV from sexual contact, remember that there are other ways people get infected, like being born with it or through a blood transfusion. In general, it's just best not to assume how they got HIV. It's irrelevant at this point anyway, right?

5. You can't tell whether someone is HIV-positive by how they look.

Just because someone doesn't "look sick" doesn't mean they're HIV-negative. Many HIV-positive people can be symptom-free for years before discovering they are infected. That's why it's so important to get tested regularly. You'll be able to get early medical intervention and prevent inadvertently infecting someone.

Actor Danny Pintauro, best known for his role as Jonathan Bower on the TV show "Who's the Boss" as a child, came out as HIV-positive this year. Photo by Matt Winkelmeyer/Getty Images.

Here's how to handle conversations about HIV and AIDS in real life to stop stigma in its tracks:

Be mindful of your language when talking about HIV. A lot of common terms can reinforce stigma. For example, the term "clean" when referring to negative HIV status implies that someone who is HIV-positive is dirty.

Treat a person respectfully when they disclose their status. Be compassionate in your response and make sure to respect their privacy. Their disclosure is not consent to being an open book about sexual history, medical treatment, or how they contracted the virus. And just because they disclose their status to you doesn't mean they're giving you permission to reveal it to everyone else, too.

Do not speculate on or disclose someone's HIV status without permission. Basically, don't do what the Enquirer did with Charlie Sheen.

Get tested. Knowledge is power. Visit this link to find a place near you. A lot of places offer free testing, which can be completed in a few minutes!

Olympic gold medalist Greg Louganis tested positive for HIV in 1988. He is an advocate for LGBT and people diagnosed with HIV/AIDS. Photo by Jason Kempin/Getty Images for The Point Foundation.

Educating yourself about HIV just doesn't make you more knowledgeable, it makes you a real force in reducing HIV stigma.

HIV stigma is very real — and it has dangerous consequences. It keeps people from getting treatment and but also getting the care and support from others that they (all of us?) need. Many studies have found there are significant public health risks because of stigma.

We're probably never going to persuade everyone to treat Charlie Sheen's diagnosis with respect and dignity or prevent them from making stupid TIGER BLOOD jokes. But the lessons we learn from how we talk about Sheen's announcement have real-world repercussions on non-famous people living with HIV stigma every day.

If we work hard to reveal the reality — that living with HIV isn't a death sentence, that there's nothing to fear from HIV-positive individuals — we can create a world where folks can divulge their status on their own terms. It'll be a better, safer world for everyone.

Sportswriter and podcaster Spencer Hall shared a 1994 photo of the Eagles on Twitter Wednesday and it made anyone who lived through the '90s cringe. "Try to find a worse-dressed band than the 1994 edition of the Eagles, it's not possible," he captioned the photo.

The photo looks like the epitome of 1994 mall fashion. It reeks of "Melrose Place," The Gap, and Anchor Bay. What's worse is that it appears as though the 40-somethings in the photo are trying to look like a hip, flannel-wearing grunge band of the time, minus the edge.

Keep Reading Show less
music
Get stories worth sharing delivered to your inbox
By signing up you agree to Upworthy's privacy policy.
Trending Stories
justice
Culture