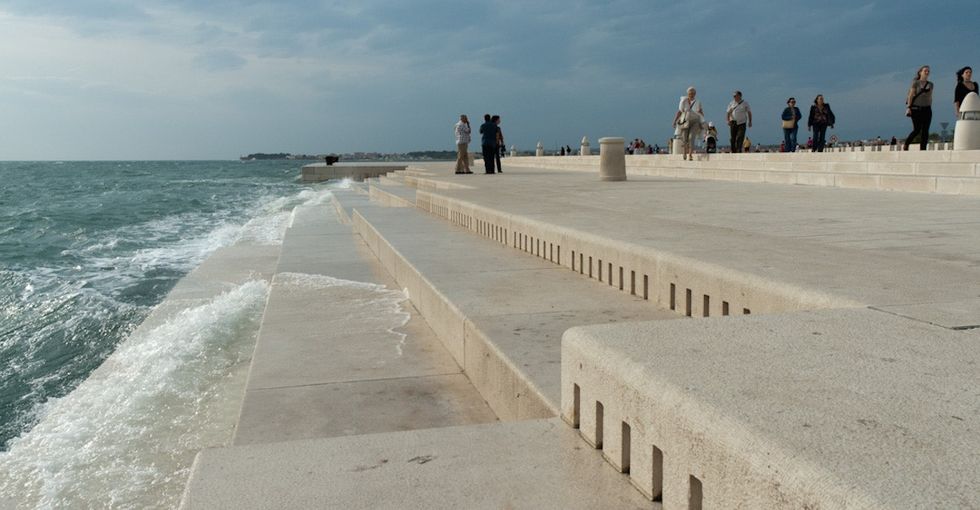 Imagine walking along the picturesque Adriatic Sea, treading lightly on a set of white stone steps as a cool breeze rolls past.

Carved into the steps are narrow channels that connect to 35 organ pipes, each tuned to different meticulously arranged musical chords.

As the waves lap against the steps, they push air through the pipes and out whistle-holes in the surface above, making a harmonious and completely random musical arrangement.

But you don't see what's happening below the surface. You close your eyes and all you hear is a song like you've never heard before, one completely unique to the movement of the sea at that exact moment.

(Hit the orange button to hear it.)

The Sea Organ, or the Morske Orgulje, is an incredible feat of architecture designed to bring life back to one of the world's oldest cities.

Zadar, a 3,000-year-old city on the coast of Croatia, was almost completely destroyed in World War II –– so many of its ancient landmarks lost forever. Years after a rebuilding that featured lots of plain, concrete structures, award-winning architect Nikola Bašić was brought in to bring some delight back to the coastline.

That's when he came up with the idea.

No doubt he was inspired by the hydraulis — a nifty little instrument built by the ancient Greeks that used water to push air through tuned pipes — or even the Wave Organ in San Francisco — a set of curved tubes built in the 1980s that amplify the gurgles and howls of the Pacific Ocean.

But the intricate design of the Sea Organ is what sets it apart and makes it truly something to marvel at.