Linkin Park's touching tribute to Chester Bennington reminds us why he matters.

It was about so much more than just music. 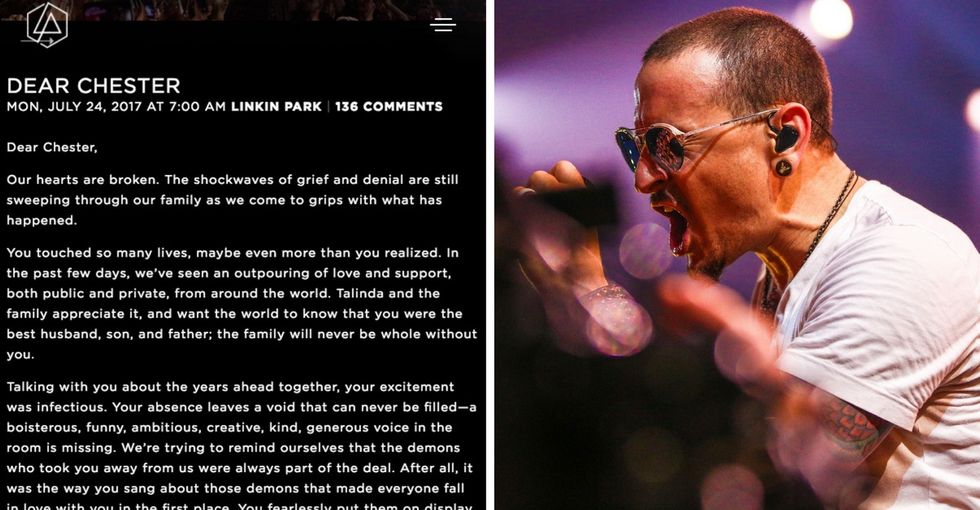 Four days after Linkin Park's Chester Bennington died by suicide, his bandmates posted a powerful tribute to the late singer.

"Our hearts are broken," the letter begins. "The shockwaves of grief and denial are still sweeping through our family as we come to grips with what has happened."

The band goes on to talk about how many lives Bennington touched during his life and the powerfully emotional reaction from fans to his death.

Dear Chester,Our hearts are broken. The shockwaves of grief and denial are still sweeping through our family as we...

It's the band's frank words about mental illness and Bennington's role in destigmatizing it that really stand out.

Describing him as "a boisterous, funny, ambitious, creative, kind, generous voice," they touch on the duality of mental illness and suicidal ideation. Someone can seem, on the surface, to have it all together — but underneath, things can be much different.

"We’re trying to remind ourselves that the demons who took you away from us were always part of the deal. After all, it was the way you sang about those demons that made everyone fall in love with you in the first place. You fearlessly put them on display, and in doing so, brought us together and taught us to be more human. You had the biggest heart, and managed to wear it on your sleeve."

From the band's first record to its most recent, Bennington sang openly and proudly about some of the struggles he's had — both his mental state and with substance abuse. He was human, and by writing and singing lyrics about what was going on in his life, he reminded fans that it's OK to be human too.

Mental illness is extremely common and appears in many forms.

Roughly 18% of adults in the U.S. will experience some form of mental illness each year. Even so, mental illness is still extremely stigmatized, meaning that a lot of people won't seek the help they need out of shame.

If there's one thing we can all learn from Bennington's death, it's that we shouldn't be afraid to talk about these issues — with each other or with mental health professionals.

Bennington during a May 2017 concert. Photo by Isaac Brekken/Getty Images for CBS Radio Inc.