Learning a new language can be hard. Music can make it easier.

Sometimes an opportunity is all you need to become a better version of yourself. 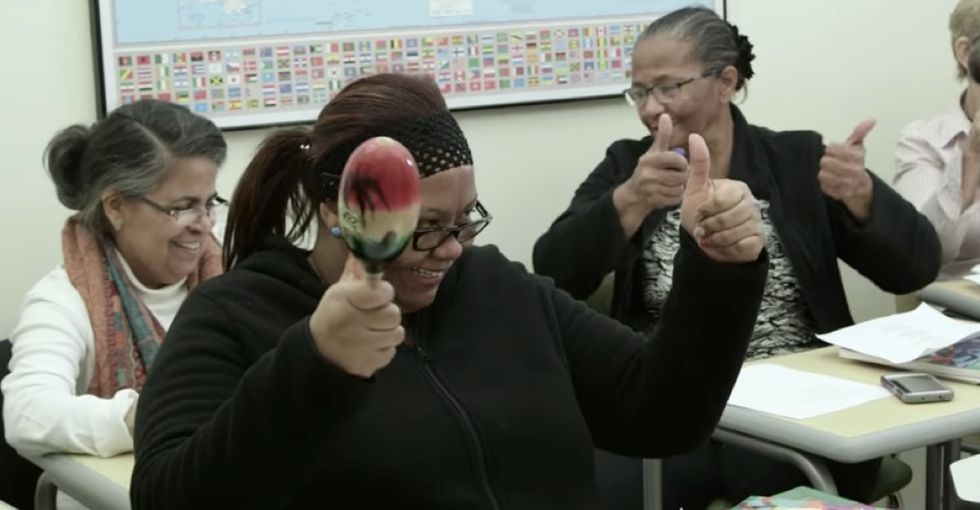 One day, during the fall of 2016, 60-year-old Olga was shopping in downtown Boston when she overheard several women raving about the English class they were taking.

Olga grew up in Moca, in the Dominican Republic. She came to the United States in 1993 with her daughter and lived with family in New Jersey at first, where she worked at a sweater factory. In 2014, she moved to Boston, where she lives today.

A self-described busybody, Olga hates wasting time. She would much rather use her time to improve herself. Now, in Boston, when she's not knitting or working as a seamstress at David's Bridal, she's crocheting, reading, or watching the news on television.

When Olga overheard these women, she had been looking for a place to take English classes for a long time. She marched over to them and asked about the classes, which they said were being offered for free at Rosie's Place in downtown Boston.

Rosie's Place was founded in 1974 as the self-described "first women's shelter in the U.S." They help homeless and low-income women find opportunities to better their lives.

"Just tell me where it's located, and I'll find it," Olga says she told the women.

She immediately walked out of the store and headed to Harrison Avenue in downtown Boston. She says she missed the shelter at first, almost walking into a CVS instead. But when she did walk through the doors at Rosie's Place, she was instantly excited. She was told she qualified for their English courses and was given instructions to attend the next class. She hasn't stopped going back since.

These classes aren't just any classes, and that's where the story gets good.

Olga found out that she wouldn't be completing a typical "This is how you say 'dog,'" lecture type course. Instead, her classes would be designed by Berklee College of Music students. These students would be trying out new and exciting approaches that help people retain information through music.

Image via Berklee College of Music/YouTube.

Kevin Leong is one of those students. He's a graduate student at Berklee College of Music and an international student. Kevin has helped run and structure this program for the past year. Essentially, the program uses a specific tool — music, and songwriting in particular — to empower women, teaching them conversational English.

For the past semester, 10 to 15 women (including Olga) have committed to learning a new language with the help of these dedicated students. Kevin says there's an 82-year-old woman from China who inspires him because she refuses to take "no" for an answer. He says she said, "I don’t speak English, but it’s never too late to learn a new language.”

Most people learn faster with music because it's a powerful mnemonic tool. Songwriting and singing are memory aids.

For example, think of the alphabet song. The letters aren't linked to one another, but it's the music that binds the syllables together to give the song meaning.

That's why using songwriting helps students like Olga pick up English a little more quickly. By having them repeat the words in a song, it helps them practice articulation and better remember the words themselves.

Kevin says the women in his class feel validated and thankful because they have a place to share their stories from the past while learning a new language. Through their collective songwriting, they've come to learn that one woman was a psychologist in her home country, another a hydraulic engineer, and another, a physician.

“To see some women travel from an hour and a half outside of Boston just to come to class to learn English ... is really inspiring," Kevin says. "To be able to be a part of that, and to make it interesting for them, and to see it being effective ... is extremely gratifying.”

For Olga, this class has made all the difference.

For one, she says she's never received so much loving attention as she has in these classes at Rosie's Place. She feels she's learned a lot in just four months and loves the way they teach. She also lives alone, so she looks forward to attending every class.

"All the women I meet, I encourage them by saying, 'Go! Go! This class is very interesting, very important," she says. "Besides, they teach us with lots of love.'"

And second, Olga almost didn't get her job because she didn't speak much English. Now, she's excelling: She says she can better understand the people around her, and she can also contribute to the conversations at work too.

Now, when she attends class at Rosie's Place and one of her teachers greets her with "Good morning, Olga," she feels extremely proud that she's able to reply with "How are you?"

"You know when you’re older, sometimes it’s more difficult to comprehend new things, but here, I’ve learned a lot," Olga says. "I can understand some English now — not a lot — but I’ve accomplished a whole lot.”

The semester will be over soon, but Olga has plans to tackle a writing class in the fall.

At a time when a lot of people are questioning whether the all-mighty "American dream" is alive and well, Olga is proof that it is.

The American dream is all about being given the opportunity to reach for your goals. And while Olga came to America with little, she has slowly but surely found a way to carve out a positive path for herself.

In a time when it feels as though things may be moving backward in America, especially for immigrants, this program should give us hope.

Olga and Kevin are a beautiful testament to the fact that these dreams still exist, and that good people are working to make America a welcoming, successful place for immigrants.